It was winter of 2019 and Tim Baker, who had just been for a surf, was taking an ordinary car trip home. Listening to the radio as he drove through the Gold Coast, he tuned in to an interview that would ultimately lead him on an extraordinary life-altering, death-altering trip.

American journalist Michael Pollan was discussing his recently published book How to Change Your Mind. In the New York Times best-seller, Pollan discusses how psychedelics like LSD and psilocybin (the psycho-active compound in magic mushrooms) were not the dangerous drugs he had once thought, but could be effective medicine for depression, anxiety, addiction and even to alleviate the suffering of terminally ill cancer patients. 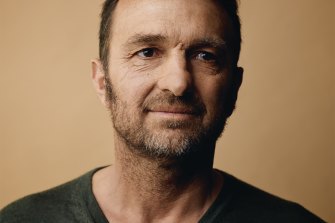 TIm Baker took a trip that changed his mind about life and death. Credit:Kenny Smith

The terminally ill patients Pollan met while writing the book described profound experiences. The kaleidoscopic shape-shifting of their perception, after a single large dose, extended to the way they perceived their death. It was no longer a source of terror but something they could meet with curiosity and peace.

One study showed guided psilocybin trips completely or mostly eliminated a fear of death in 80 per cent of terminally ill cancer patients.

It wasn’t just interesting to Baker, now 57, it was personal. In 2015, the father of two and award-winning surf writer had felt panic rise as his “balding, bespectacled urologist” dispassionately informed him he had stage 4, metastatic prostate cancer.

Since that day, Baker has tried chemotherapy, hormone therapy, radiation and surgery. A side effect of some of these treatments was poor mental health. There were mood swings, depression and, at one point, he found himself contemplating suicide.

Though his oncologist had suggested antidepressants, he wasn’t convinced that adding yet another pharmaceutical to the mix, with its potential for yet another set of side effects, was the right answer. He meditated, exercised, surfed, ate well, had a support group. And yet. There was, he felt, trauma about his diagnosis still trapped in his body.

So, he ordered Pollan’s book when he got home. Once he’d read it and done his own research, he attended a conference run by Mind Medicine Australia (MMA) – the not-for-profit organisation working on the use of medicinal psilocybin and MDMA-assisted therapies to treat a range of mental illnesses. In 2020, Baker connected with a psychologist in the Northern Rivers of NSW who did psychedelic therapy “on the down-low”: As psychedelics are still a prohibited substance in Australia, they are illegal for therapeutic use unless you are part of a clinical trial, explains MMA executive director Tania de Jong.

The therapist explained the drugs would essentially take his amygdala – the fear centre of the brain – offline,“so that you feel safe to revisit trauma that you would normally dissociate from”. 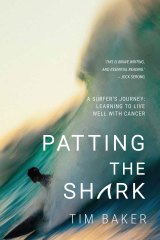 Patting the Shark, by Tim Baker.

After their chat, Baker was given a ceramic cup containing a capsule of MDMA. He lay down on a mattress by a fireplace, put on noise-cancelling headphones, eye-shades and embarked on a “game-changing” internal trip.

He consciously took himself back to the day of his diagnosis and to the urologist, who Baker harboured some anger towards for the “insensitive, abrupt” way he felt the news had been delivered. But as the medicine kicked in, he felt overcome with compassion for the doctor. “I thought how hard must that be to have to deliver that news,” he says. “Something about that experience turned it around… It immediately gave me some relief from the trauma around my diagnosis, and the existential dread.”

After that, he went on what felt like “a magic carpet ride through my life”. For a timeless five hours, Baker lay there feeling blissful as his friends and family members drifted in and out of his consciousness. “At one stage I felt like I was cradling my newborn daughter who is now 20. At another stage, I felt like I was surfing,” says Baker, whose experiences are detailed in his memoir, Patting the Shark, out on August 2.

That, followed by a psilocybin experience with the same therapist several months later, helped Baker to make peace with his mortality and find lasting relief from the depressive symptoms that had caused him so much grief. 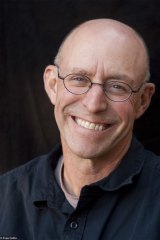 Between 1953 and 1973 there were thousands of studies reporting “frequently positive” results for the use of psychedelics to help alcoholism, addiction, OCD, anxiety, depression, terminal illness as well as among well people to enhance creativity and spirituality. When psychedelics were by banned in 1970 by US president Nixon in his “war on drugs”, research funding dried up, and a government campaign was launched suggesting they scrambled people’s brains.

“By the time I was old enough to consider using LSD, everything you heard about it was terrifying,” says Pollan. “Everything you read in the media was that you would end up in a psych ward and be dead if you used those… All that propaganda worked on me.”

From gardening to food writing, and now psychedelics, Pollan has made a career out of his curiosity about plants. It was while writing his 2001 book, Botany of Desire, and specifically a chapter about the way plants gratify the human desire to change consciousness, that planted a seed for his current body of work.

“I have always been curious about this deep desire to change consciousness. You’re doing it right now,” he says over Zoom, referring to the coffee I’m cradling. “I did it earlier today, and I’ll do it again this evening when I have some wine with dinner. But there’s something about us that’s not satisfied with normal, everyday consciousness, and we seek to modify the rhythms and texture of it in various ways. Sometimes subtly, as with coffee and tea, and sometimes profoundly, as with psychedelics.”

Since 2006, research into psychedelics has resumed internationally “with encouraging findings”, says Daniel Perkins, the co-director of Psychae Institute, a $40 million psychedelic medicine institute that launched in Melbourne in 2021. As Pollan came across the new research being done, he wanted to learn more, so he started speaking with cancer patients – people just like Tim Baker – who “completely changed their attitude towards their death”. 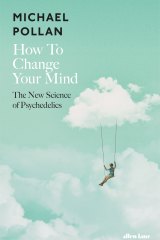 How to Change Your Mind.

This research, along with the stories of those he spoke with helped him to understand psychedelic therapy “was important and real”. It inspired a series of work including his 2019 book How to Change Your Mind, his 2021 book This Is Your Mind on Plants and a new docuseries on Netflix, which was released globally on July 12, also called How to Change Your Mind.

“It also made me intensely curious to see what it was like,” says 67-year-old Pollan, who once grew cannabis on his window-sill in New York and who’d had a “very unpleasant experience” with magic mushrooms in his 20s. So at 60, feeling “kind of stuck” and “open to nudging myself out of the grooves of habit”, he tried LSD for the first time.

That, along with subsequent psychedelic trips have given him a new perspective. “It’s helped me with my priorities at various times… it’s increased my sense of gratitude for everything I have in my life, particularly relationships. And it’s given me perspective on my ego.”

An “ego-dissolving” experience on psilocybin was, he says, “sort of a death”: “[It] teaches you that you survived the loss of your ego. You’re not identical to this chattering voice in your head.”

Going deep into our minds can be scary, and we never know what our subconscious might bring into our awareness, so trips should always be guided, he says. And though the conversation has changed “radically” since he began writing about psychedelics, questions remain about how they work on the brain and how they would work therapeutically in practice, if they are made legal.

MMA has recently submitted a second application for MDMA and psilocybin to be downgraded from a schedule 9 (Prohibited Substance) to a schedule 8 (Controlled Medicine). De Jong says an interim decision is expected by the TGA in September. Perkins doesn’t anticipate an approval given the first application was rejected in late 2021.

It doesn’t make sense, he says. Concerns about acute and long-term effects “does not reflect the scientific evidence from animal, human clinical, and large population health studies indicating that psilocybin is of low toxicity, is non-addictive, and of low-abuse potential, although risks do exist for people at risk for people with (or at risk of) a psychotic disorder”.

Studies into psychedelics continue, in Australia and abroad and people, like Baker, along with the young people, the grandparents, the soldiers and the cops Pollan spoke with for his docuseries, continue to seek the treatments underground, risking criminal prosecution.

Pollan, a co-founder of the Berkeley Center for the Science of Psychedelics, insists he is not the leader of the modern psychedelic movement but does think it’s time we all changed our minds about psychedelics: “I’m not an activist. If I advocate for anything, it’s more research and more public understanding. I don’t advocate for people taking psychedelics, I just advocate for us taking them seriously as a potential treatment to relieve human suffering.”