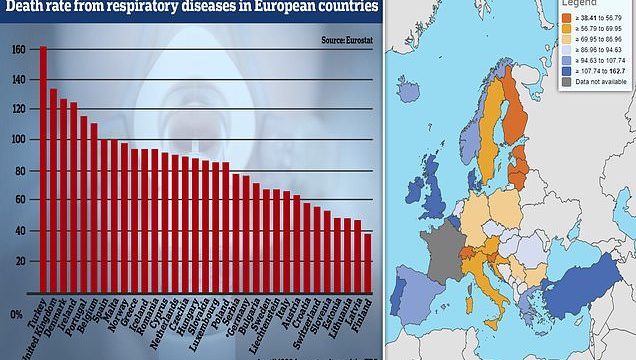 UK has poorest lung disease survival rate in Europe with Brits up to THREE TIMES more likely to die from asthma, pneumonia or COPD than people in Finland or Italy

Nearly 84,000 people die of respiratory illnesses such asthma, pneumonia, chronic obstructive pulmonary disease (COPD) or lung cancer and in the UK every year.

The charity’s analysis found Brits are three times more likely to die from lung disease than people in Finland and twice as likely as that of Italians and Swedes.

Only Turkey’s death rate was higher than the UK’s.

Asthma and Lung UK said the problem was a combination of an overstretched NHS, huge waiting lists and high levels of air pollution.

The data does not include the impact of the Covid pandemic, which may have driven up rates further and exacerbated waiting times for treatment. 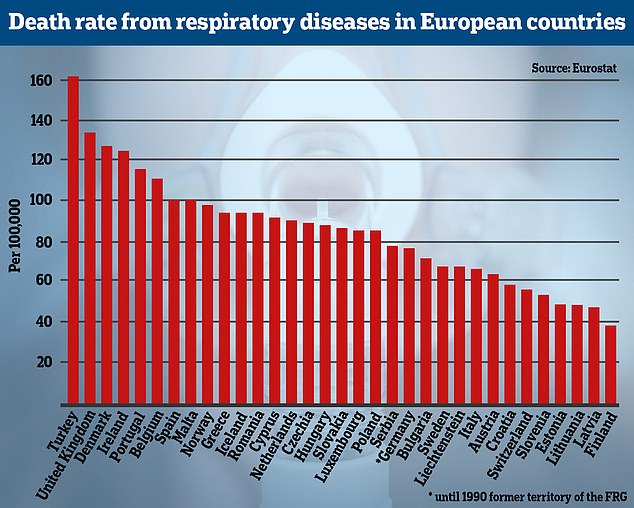 The above graph shows the fatality rate from respiratory diseases across Europe in 2018, the latest date available. It reveals Turkey has the highest rate (162.7 per 100,000 deaths), followed by the UK (134.5). But in terms of western Europe the UK had the highest death rate. On the other end of the scale, Finland had the lowest fatality rate (38.41) 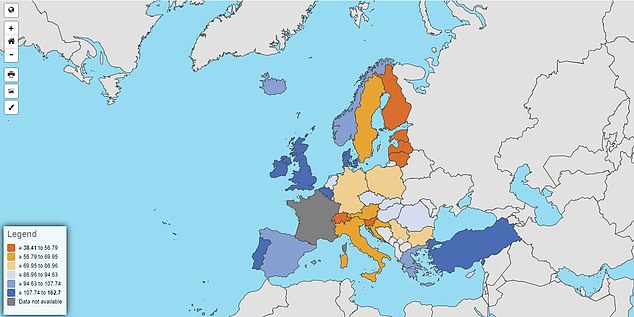 The above map shows death rates from respiratory diseases for each country over 2018, the latest year available. Dark blue colours represent the highest death rate, while light orange shows the lowest death rate. Grey shows no data is available

The figures — compiled using EuroStat — suggested the UK has a death rate of 134.5 per 100,000 fatalities from lung conditions in 2018, the latest available.

One in five people in England have a respiratory disease, NHS figures show.

It is also the third biggest cause of death in the country behind cancer and cardiovascular disease.

COPD is the medical term for a group of lung conditions — including emphysema and bronchitis — that cause difficulty breathing.

It is a common condition, and mainly affects people in middle age or older who smoke.

Experts say rates are high because of historically higher rates of smoking and drinking — both risk factors for respiratory disease.

Although these rates have now fallen, during the 1970s they surged among women due to cultural changes.

Data was not available for France for 2018, the latest date available and the period studied.

But in the previous year it had a rate of 59.1 deaths from respiratory illness per 100,000 fatalities, which was below the levels in Italy and less than half that of the UK.

Chronic lower respiratory diseases — including COPD and asthma — were the leading causes of death from lung disease in England in 2018, the Office for National Statistics (ONS) said.

Influenza and pneumonia were the second highest, followed by lung cancer.

Dementia and Alzheimer’s were the leading cause of death in 2018, triggering 107,000 fatalities.

They were followed by chronic lower respiratory diseases (60,000) and cerebrovascular diseases including stroke (58,000).

Since the pandemic began Covid has been listed as one of the top causes of death in England.

The most up-to-date figures, for January 2022 rank dementia and Alzheimer’s disease as the leading cause of death (6,000 fatalities), followed by heart disease (5,000).

But Covid is the third-leading cause of death (3,700), followed by chronic lower respiratory diseases (2,500).

Sarah Woolnough, chief executive of Asthma and Lung UK, said: ’The state of lung health in the UK is shameful, with more than 100,000 people dying every year from lung conditions, the numbers of hospital admissions increasing, and air pollution causing people to develop lung conditions or making existing ones worse.

‘It is a national scandal that people are more likely to die from a lung condition in the UK than almost anywhere in Europe.

‘We need urgent action now. The pandemic has brought it to people’s attention that lung conditions can and do kill and how terrifying it can be to struggle with breathlessness.

She added: ‘We are urging Government to triple funding for respiratory research to identify new ways of diagnosing and treating people with lung conditions, tackle air pollution and ensure better diagnosis and care for everyone with a lung condition.’

Death rates from respiratory illnesses are so high in the UK because, while fewer men are dying than in the past, lung disease is killing as many women as 30 years ago.

The disparity is likely linked to lifestyle changes over the past 50 years, which are catching up with older women.

Smoking and drinking habits were predominantly male activities until the 1970s, when cultural changes saw them increasingly taken up by women.

Britain now has one of the lowest smoking rates in Europe, but in the past it was much higher.

Before the pandemic many patients were struggling to get basic care from their GPs such as medicine checks and help using inhalers.

But the situation has now been exacerbated with many seeing their health deteriorate while being unable to access care.

People stayed away from health services for fear of catching the virus or being a burden, and now many are stuck on record waiting lists.

A Department for Health and Social Care spokesperson said: ‘Improving the lives of people with lung conditions is a clinical priority for the UK. Working with partners we’re investing millions to advance research, increase early diagnoses and improve access to treatments.

‘Since 2017, the National Institute for Health Research has invested over £130 million into respiratory health and disease research.

‘Alongside this, we’re funding research into respiratory infections and the health impact of air pollution and other environmental exposures.’