Diagnosed with endometriosis at 14 after always experiencing "irregular and really painful" periods, within three years she had undergone five laparoscopies (keyhole surgeries on the uterus to remove the endometrium).

With the remaining scar tissue still flaring up during her period, and a daily combination of pain killers not cutting it, doctors advised Ms Pack to stop menstruation altogether by taking the contraceptive pill until she wanted to have children. 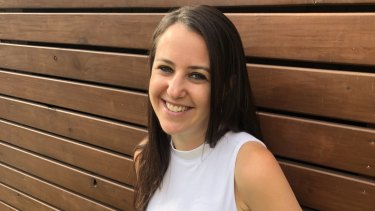 Lara Pack was surprised when her physio offered sex toys as a treatment for pelvic pain.

It was never going to be a long-term solution. After the birth of her first child, the pain returned.

A visit to a pelvic floor physiotherapist revealed Ms Pack had vaginismus, an involuntary contraction of the pelvic floor muscle. She was surprised to receive her prescribed treatment.

There are no comprehensive statistics on the prevalence of pelvic pain in Australian women, although the Royal Australian College of General Practitioners estimates it is anywhere between 15 and 25 per cent.

With so many seemingly affected, Ms Pack, who works in medical technology, was shocked to learn she would need to purchase the equipment for her at-home treatment from a conventional sex store.

"I wasn't there for that reason," she says, adding that most of her friends were unaware sex toys could be used in this way.

After finding the treatment did help with her condition, she set about developing her own product line, Elixir Play. Launched in January, she says it was designed and marketed with sexual health as the primary focus.

There's some research to suggest that using sex toys has a positive effect on women's health. A 2009 US study found women who regularly used vibrators were more likely to have had a gynaecological exam in the past year.

"Here's this dildo-looking thing, and they ask you to just put it in when you're watching TV and try to stretch out the muscle?"

Although recent years have seen the popularisation of at-home devices like the "pelvic wand", the treatment of pelvic pain through the use of sex toys is a "tricky and emotive subject", explains Amy Stevenson, physiotherapist at Jean Hailes for Women's Health.

She says there has been little to no research done on the effectiveness of such devices.

"As far as scientific evidence, there is nothing that I'm aware of," she says, adding that current research is suggesting the most effective treatment can come from across a range of disciplines, involving physiotherapy, gynaecology, psychology and even dietetics.

However, Ms Stevenson says encouraging the pelvic floor muscles to relax, as well as desensitising the area, is usually the goal when treating pelvic pain, with physiotherapists sometimes using devices called "trainers" – which look like conventional vibrators, although can operate with or without vibration – in therapy.

"When you've had pain for a really long time, the muscles are often really sore and can't relax well, but that [training] can be done with or without equipment."

This type of therapy can be particularly useful for women who have suffered from traumatic pelvic pain, caused by conditions like endometriosis.

"It's really important for women [with endometriosis] to have pleasurable touch in that area, it's just a matter of what that touch looks like," she says, noting that there is often a significant "psychological overlay" to consider when it comes to treating pelvic pain.

Ms Stevenson says she would discourage people experiencing pelvic pain from trying equipment without first seeking the advice of a health professional, noting that it is possible for stimulation to cause muscles in area to contract further, leading to more pain.

"You can't just pick up something and shove it in; it is potentially going to make things worse."