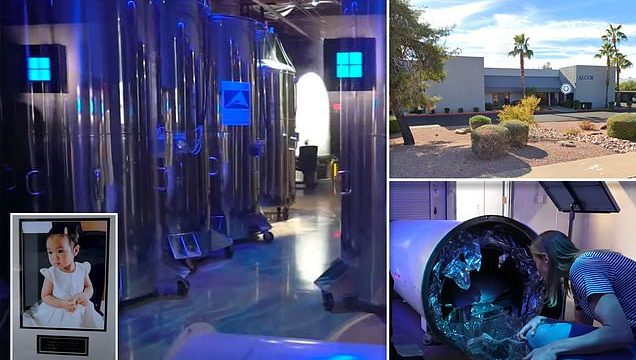 Inside the unassuming lab in Arizona where bodies of patients as young as TWO are cryogenically frozen for $200,000 until science can bring them back to life

From the outside, the Alcor Life Extension Foundation in Arizona looks like any other warehouse.

But inside it contains the frozen dead bodies of hundreds of patients who hedged their bets on future technology being able to bring them back to life using their remains.

So far 199 deceased remains are stored there, kept fresh thanks to liquid nitrogen keeping the bodies at negative-135 degrees C – a temperature so cold it stops all cellular function and preserves their state until defrost.

People who invest in these services are often desperate to reunite with family in the future. One patient in storage is a two-year-old Thai girl who died of brain cancer. Her family hopes to reunite with her down the line.

It also attracts the rich and eccentric as well, though. Bitcoin pioneer Hal Finney famously chose to have his body cryopreserved at Alcor after he died from complications related to ALS in 2014.

But there are serious ethical and moral concerns about the practice which has been touted for decades but remains a pipe dream.

Max More, CEO of the firm, admitted during an interview in February 2020 that his firm does not know when technology needed to wake up their patients will exist.

The high prices of this preservation can often drain a person’s estate, and will often consume a massive portion of their life-insurance payout – which could have instead benefitted their family down the line.

To become an Alcor member, a person must pay a annual fee upwards of $200 at age 18 – with dues growing with the age a person chooses to sign up at.

A non-member whose loved ones wish to have them frozen must fork-up an additional $20,000.

If a person ends up dying outside of the US or Canada and must have their remains retrieved, an additional $10,000 cost is added. 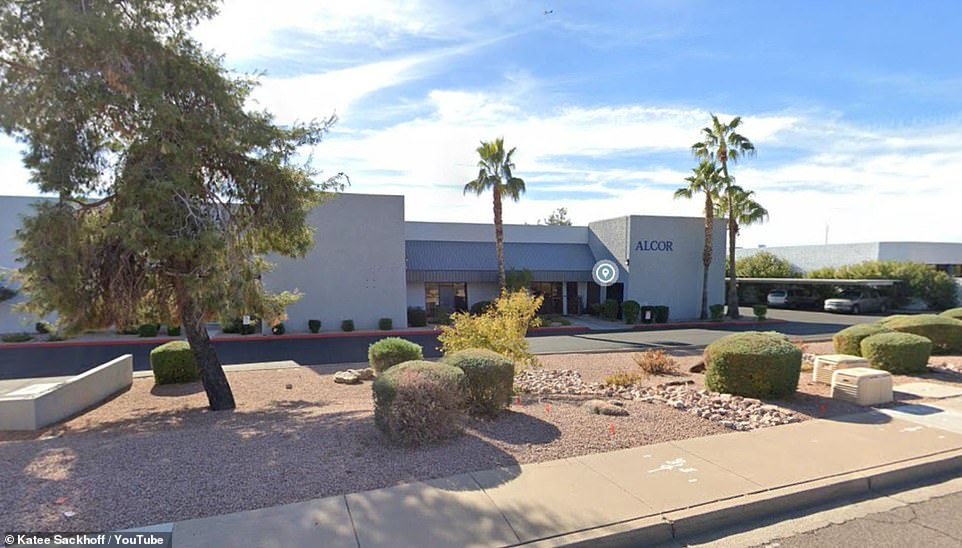 Alcor’s Headquarters in Scottsdale, Arizona (pictured) looks relatively innocuous from the outside, appearing like a standard warehouse. Inside it contains the remains of dozens of people that hope to pioneer the future of cryonics and be among the first humans to be revived in the future 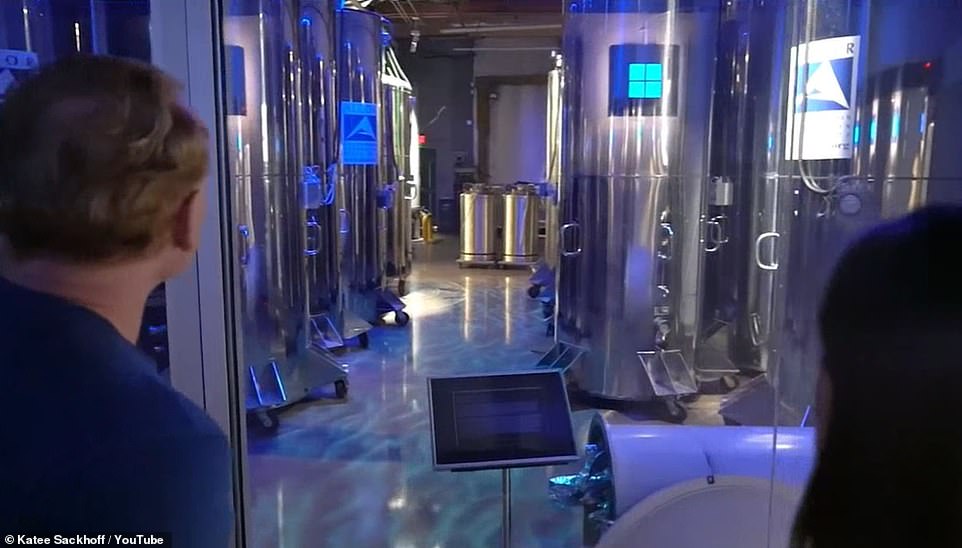 People who choose to be stored after death are placed in large metallic cylinders. Four full bodies can fit in each cylinder. Around five brains can be placed in the slot that fits one body. Just under 200 people are currently in storage. The containers do not run on electricity and are filled with liquid nitrogen once every week 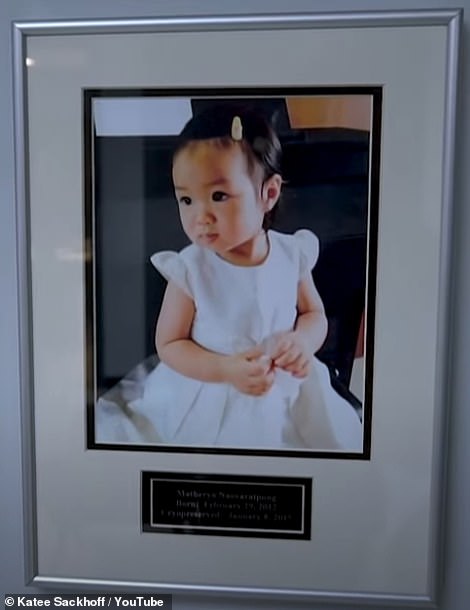 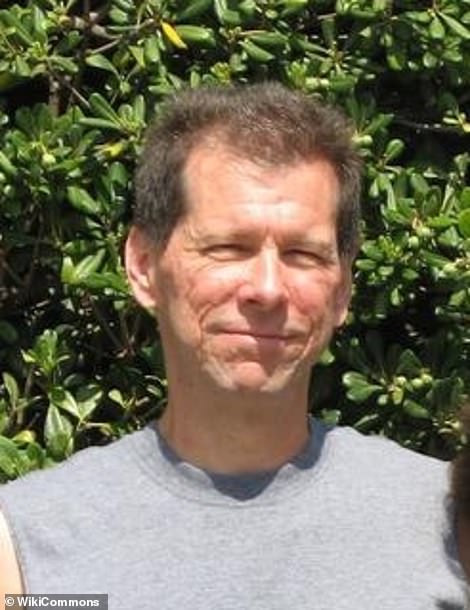 A three year old Thai girl (left) who died of brain cancer is one of the youngest people stored at the facility. Her family will also be stored after their death in hopes of rejoining her in the future. Hal Finney (right), computer scientist and famous early bitcoin investor, was stored at Alcor in 2014 after he died from complications with ALS 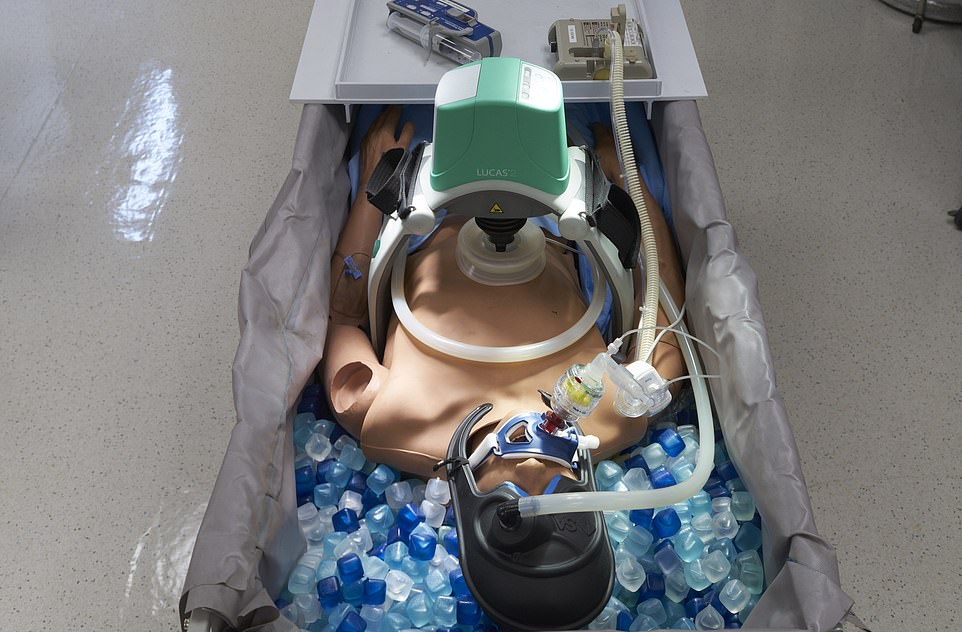 When a person dies, their body is iced to be cooled down and then has all of its blood and other liquids removed so they do not crystalize in storage and damage the body’s cell. Pictured:  A dummy in place of where a body would be while it is being prepared to be stored 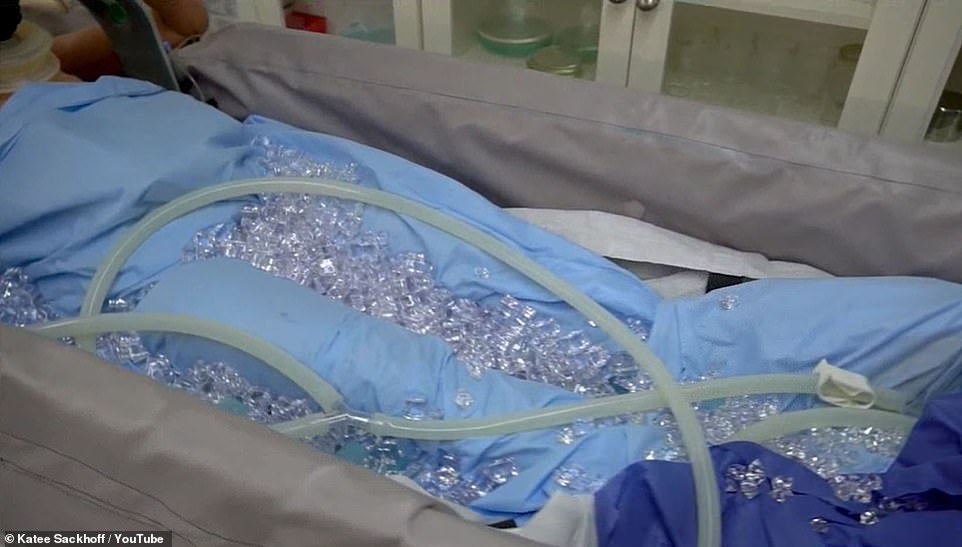 Pictured: A bath where a person is covered in water and ice to chill them down, before their blood and other fluids are removed from their body to be prepared for storage in liquid nitrogen 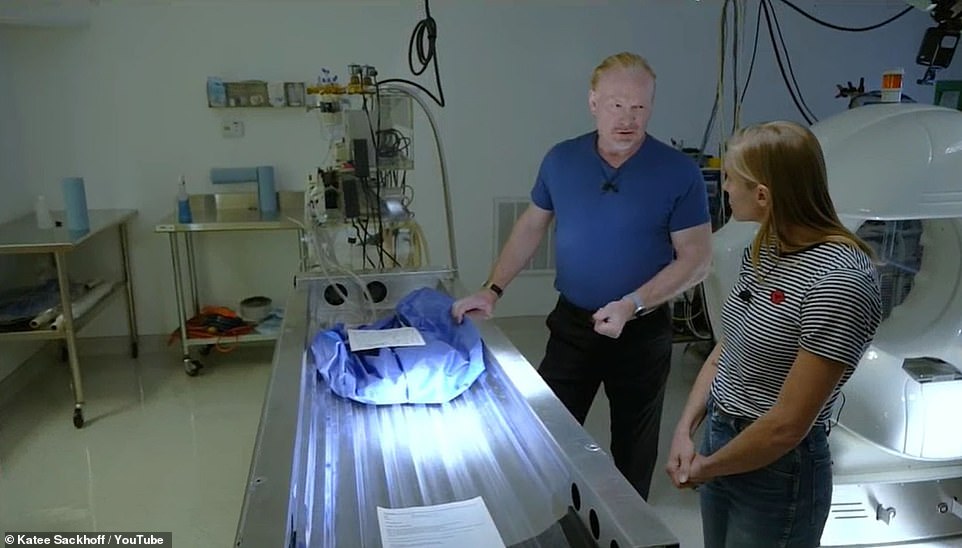 Pictured: An operating table used to prepare the bodies for storage. After being drained of liquid the bodies are placed in containers to fit alongside up to three others who are also being placed in storage 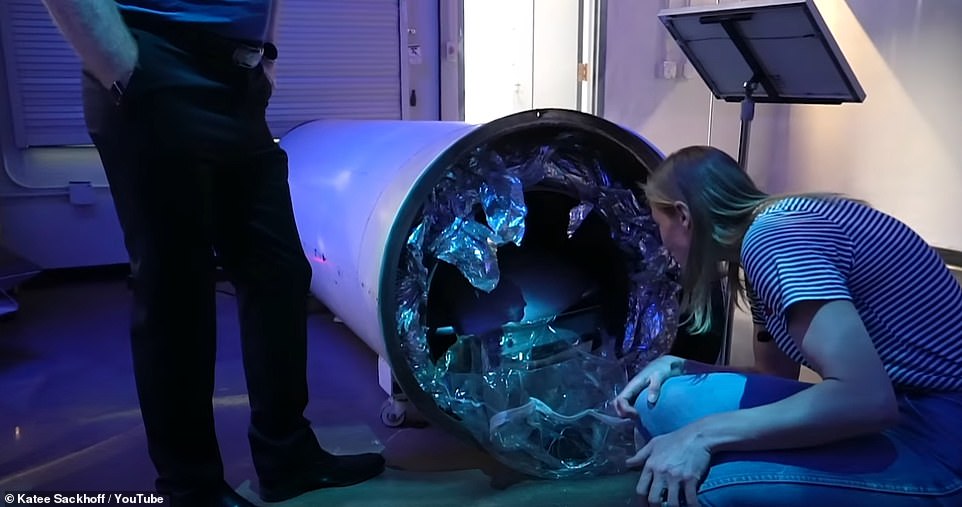 Pictured: An open cylinder that can be used for storage of a person’s body or brain after their death. Sackhoff (pictured) described it as tight and claustrophobic 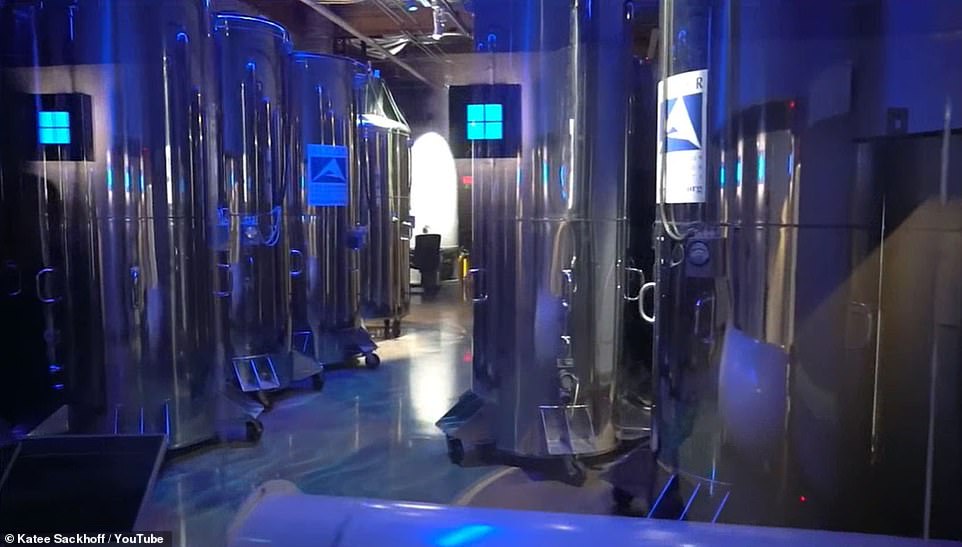 Pictured: The metal cylinders that hold the bodies and brains of people who choose to be cryonically frozen after their deaths 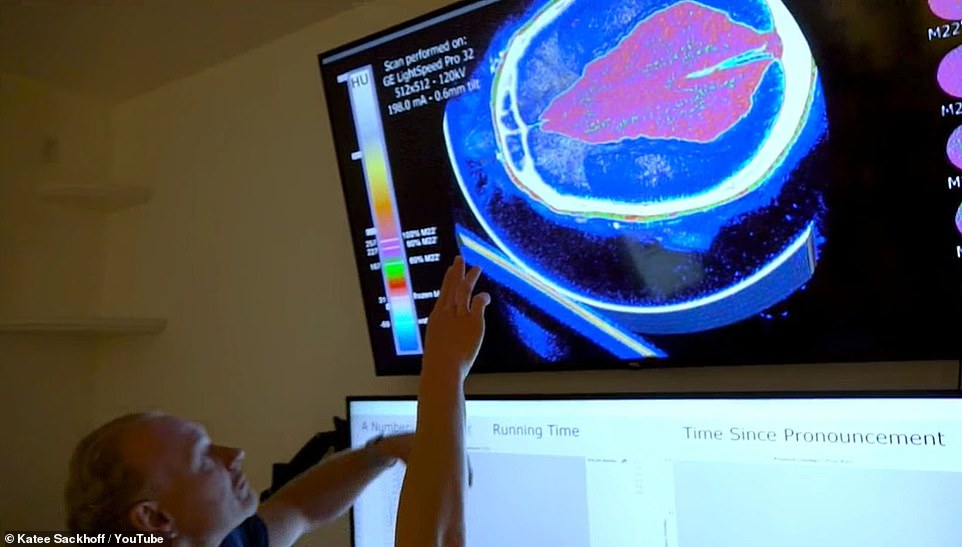 Pictured: Brain scans of a patient that chose to have the organ frozen and maintained to be revived in the future. The Alcor team is hopeful technology to rebuild the body around the brain would allow for it to be implanted into a new body in the future

The firm describes itself as a  ‘world leader in cryonics, cryonics research, and cryonics technology.’

It was found in 1972, and now holds the remains of 199 patients. Some have just their brain stored while others have chosen to retain their entire bodies.

Full bodies are stored in large cylindrical chambers alongside three other full bodies. Brains can be stored in shelves, with five fitting into a slot for one body.

After a person dies, doctors must work fast to preserve the body and get it into storage.

Comparing the process to organ harvesting, Mr Moore told YouTuber Katee Sackhoff in a 2020 interview that the first step was draining the body of its blood and liquids.

They then pump it full of an antifreeze-like substance. This is to prevent cells from becoming crystalized and damaged during the freezing process.

Cryonics is the practice of storing human remains in extremely low temperatures in an effort to one day revive a deceased person when technology makes it possible.

It is a niche, yet growing, field of practice. The Life Extension Foundation in Scottsdale, Arizona, is one of the leading firms in the industry with nearly 200 bodies stored.

Some choose to just have their brain stored instead of the entire body – with hopes technology will one day exist to grow a new body then implant the brain.

Remains are stored in liquid nitrogen tanks that drop their temperature as low as -132 degrees C.

The technology that will be able to revive them does not yet exist, and could potentially never exist at all.

Proponents believe it will allow people to live multiple lifetimes – sometimes with healthier and repaired bodies in the future. It has been compared to time travel.

Some have compared it to snake oil, saying it is unlikely this technology will ever emerge – and even if it does the person will not be the same once awaken.

This does not include membership fees while alive, and a multitude of other potential costs associated with the storage.

After preparation they are then placed in storage.

The storage tanks do not use electricity and are instead refilled weekly with liquid nitrogen.

One of the firms youngest members in storage is a three-year-old girl from Thailand, who died from brain cancer and was transferred to Arizona posthumously.

Mr Moore says that her parents plan to be stored as well, so the family can be reconnected when possible.

People who have their full body stored hope to be awaken if the same form that they died.

Those whose brains are stored will need technology to progress to the point where a whole new body would be created for it to be placed into.

There are some cases where a body can not be stored – like if a person suffers severe enough injury before they die or in a place where they can not be recovered.

Mr Moore is hopeful that this technology will exist and cited recent success in stem-cell research and lab-made organ growth as starting to pave the way forward.

Dr Michael Hendricks, a biologist at Canada’s McGill University, wrote in 2015 that even with a person’s nervous system mapped out before they go into freezing, it is impossible to fully replicate a person.

‘A map of connections is not sufficient to simulate, let alone replicate, a nervous system, and that there are enormous barriers to achieving immortality in silico,’ he wrote for the MIT Technology Review.

‘First, what information is required to replicate a human mind? Second, do current or foreseeable freezing methods preserve the necessary information, and how will this information be recovered?

‘Third, and most confounding to our intuition, would a simulation really be “you”?’

He explains that what makes a person’s personality, sense of self, decision making and day-to-day mood are small connections between nerve cells.

Current technology has now way of perfectly storing these cells across the body, and changes to them would fundamentally change who a person is.

For people who are just having their brain stored, a synthetic nervous system would be entirely different than the one they left behind in their old body.

‘While it might be theoretically possible to preserve these features in dead tissue, that certainly is not happening now,’ he continued.

‘The technology to do so, let alone the ability to read this information back out of such a specimen, does not yet exist even in principle.’

He said that stories of people signing up with companies like Alcor in hopes of seeing the future – and staving off the fear of death – are heartbreaking.

Hendricks compares the promises made by these firms to snake oil.

‘No one who has experienced the disbelief of losing a loved one can help but sympathize with someone who pays $80,000 to freeze their brain,’ he concludes.

‘But reanimation or simulation is an abjectly false hope that is beyond the promise of technology and is certainly impossible with the frozen, dead tissue offered by the “cryonics” industry.

‘Those who profit from this hope deserve our anger and contempt.’