While several healthcare professionals can perform some of the same functions as physicians, at the end of the day, they are not MDs or DOs nor do they have the education and training to earn the right to present themselves to patients as such. That’s the reasoning behind Senate Bill 239, recently signed into law by Indiana Gov. Eric J. Holcomb. 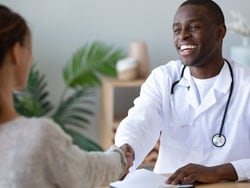 “It’s about transparency. Healthcare professionals at every level should be proud of their profession and want to help patients make an informed choice when seeking out options for treatment,” Carrie Davis, MD, a Bloomington, Indiana-based dermatologist and member of the Indiana State Medical Association’s Commission on Legislation, told Medscape Medical News. “When this law goes into effect, a patient will be able to seek that treatment with confidence knowing they can trust the education, training, and license of the healthcare expert they’ve chosen to see.”

The patient safety measure, which will take effect on July 1, specifically prohibits the misappropriation of medical specialty titles such as anesthesiologist, cardiologist, dermatologist, and others by professionals who have not graduated from medical school and completed the necessary training to adopt the physician title. It also prohibits healthcare professionals from using deceptive or misleading advertising that misrepresents or falsely describes their profession, education, or skills.

“Using the medical term ‘anesthesiologist’ for nurse anesthetists, confuses patients who deserve to be fully informed of their healthcare provider’s qualifications,” said Randall M. Clark, MD, president of the American Society of Anesthesiologists (ASA) in a statement. “This new law affirms the most fundamental right of patients to know the qualifications of their healthcare professional.”

What’s in a Title?

The problem stretches far beyond professional turf battles, as patients are often confused about the differences between various types of healthcare providers, according to the American Medical Association’s Truth in Advertising Campaign. Often, patients mistakenly believe they are meeting with medical doctors or doctors of osteopathic medicine when they are not.

Seung Sim, MD, an Indiana anesthesiologist and the immediate past president of the Indiana Society of Anesthesiologists, told Medscape Medical News that every member of the medical team plays an important role in high-quality patient care, but among that team, education and training differs.

“The threat to patient safety comes by nonphysicians marketing themselves in a way that is confusing to patients, and misleading, making the patient believe they’re seeing a physician when they’re not,” said Sim. “That patient deserves to know who is providing their healthcare and what level of education and training they have, so the patient can make the best decision for their treatment.”

Perhaps most notably, the ASA has been spearheading efforts that prohibit medical professionals to identify as physicians for several years. In 2019, the ASA authored Resolution 228, which calls on the AMA to oppose and work with state medical societies to prevent the misappropriation of medical specialties’ titles.

The resolution, which was adopted by the AMA in June 2019, also reaffirms support of the Scope of Practice Partnership’s Truth in Advertising Campaign to ensure patients receive accurate information about who is providing their care.

In addition, in 2021, the ASA condemned the decision by the American Association of Nurse Anesthetists to change its name to the American Association of Nurse Anesthesiology (AANA) — pointing out that the term “nurse anesthesiologist” could confuse patients and create discord in the care setting, ultimately risking patient safety.

While the ASA and other professional groups support team-based models of care, they are quick to point out that healthcare professionals need to know their place in the lineup.

A statement from the American Osteopathic Association (AOA), for instance, points out that only DOs and MDs can be licensed to practice medicine — and, therefore, “physician-led” should not mean “physician-optional.” In fact, only professionals who have earned the right to practice medicine through completion of medical school and accredited residency/fellowship training and who have achieved board certification in their chosen specialty/subspecialty should take the helm of these multidisciplinary teams, according to the AOA.

The AANA cast the controversy in a completely different light, characterizing its name change as part of a rebranding effort to advance the science of nurse anesthesiology and advocate for certified registered nurse anesthetists. In 2021, the AANA asserted: “The notion of being pushed by the American Society of Anesthesiologists that rebranding and changing the name of the AANA will somehow mislead or harm patients or create discord among providers is absurd at best and false and inflammatory fearmongering at worst.”