I miss my pre-iPhone brain. I've almost forgotten what it feels like to get through an article, a film, even a conversation, without my attention flitting to the little supercomputer that lives at my fingertips. Now, with one thumb twitch, I scratch every itch that crosses my monkey mind. 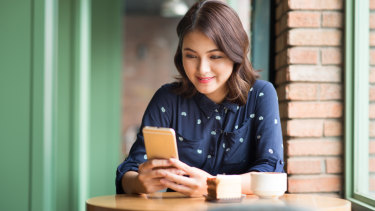 Talk of smartphone addiction is almost verging on clichéd.Credit:Shutterstock

During one particularly low week in January, my already-pretty-sickening Screen Time statistics showed I did so roughly 150 times a day – almost every eight waking minutes – for an average total of almost five hours. No wonder I felt fractious; my brain constantly shifting focus between all the tabs it had open at once.

Talk of smartphone addiction is almost verging on clichéd. Sales of old-school Nokias have been steadily rising for years, as have the books detailing 30-day detoxes and phone "break-up" plans that fill Amazon's bestseller charts.

But there's no point pretending I would ditch mine, even if I could. It's not just essential for work, it's life-enhancing in ways both prosaic and profound: how I manage my money, read my newspaper, discover new music and marvel at videos of my little niece's latest bon mots on the family WhatsApp group. So in the true manner of an addict, I hesitate to call myself one – because don't addicts have to quit?

Mercifully, Jocelyn Brewer, a psychologist with a specialism in technology who treats so-called screenagers (and their parents) struggling to maintain healthy tech habits, has no truck with the idea of going cold turkey. Instead, she encourages clients to embrace "digital nutrition" – a term she coined back in 2013 as a more constructive way to curb compulsive consumption, which might finally be gaining traction.

A recent essay on Medium, the online platform for self-publishing, suggested digital nutrition should be seen as the sixth pillar of health, in addition to the five generally agreed-upon fundamentals of diet, exercise, sleep, purpose and relationships. It even predicted a new labelling system for digital content, much like the traffic-light nutritional information we now see on food packaging.

The scope of the analogy is already endless: we "binge" on Netflix, scroll through social media "feeds", are "served" news in daily "digests"; our inboxes "bulge" while we filter out "spam"… and when it all gets too much, we take a "digital detox", which is as pointless as doing a juice cleanse then going back to eating junk; extreme diets are unsustainable, whether you're talking food or phones.

Brewer's broader point is that it's not our phones themselves that are the problem (any more than the dieter's enemy is the fork), but what we use them to consume – making screen time a meaningless barometer.

"Are you mindlessly munching on empty Candy Crush calories, or are you fuelling your body with meaningful brain food?" she asks. "Our body digests 400 calories from a slice of pepperoni pizza very differently to 400 calories' worth of carrot sticks. Similarly, an hour of mindlessly scrolling through Instagram affects you differently compared to an hour of language-learning on Duolingo."

For a while, Instagram made up the bulk of my empty digital calories: I'd pop in for a quick look, then find myself gorging on other people's aesthetics and achievements until I felt sick, or at least fairly hollow about my own.

I'd tried to impose a daily 30-minute limit before Christmas, but overrode it so frequently that, at the start of February, I decided the only way forward was to delete it from my phone altogether, along with the rest of my social media apps, from Facebook to Twitter.

If eschewing your smartphone for a dumbphone is the ultimate in digital asceticism, then this is more like cutting out sugar for a month, to retrain your taste buds. Whatever your poison, we're all digital gluttons, now. The average thumb scrolls through 295ft (90m) of mobile content every day – that's the same height as the Statue of Liberty – according to Ari Kesisoglu, Facebook's regional director in the Middle East, Turkey and Africa. And this constant grazing is damaging our cognitive fitness.

"It's a useful comparison," agrees Soren Kenner, social media expert and co-author with GP Imran Rashid of Offline, a new book revealing the "mind hacks" Facebook, Instagram, Apple and Google use to hold our attention. "You have junk food and you have junk information – tabloids, clickbait, celebrity gossip. A glut of useless information where a little goes a very long way and too much is actually bad for you."

He cites the side effects of excessive social media consumption as "at least as troubling" as those of disordered eating: "Stress, sleep disturbance, anxiety, depression, problems focusing, lowered self-esteem, decision-fatigue."

In much the same way as the obesity crisis has been fuelled by an overabundance of cheap, empty calories, could today's mental health crisis be built on the barrage of information our minds and bodies are programmed to crave but ill-equipped to process?

According to Kesisoglu, between the beginning of time and 2003 (when the internet truly began to boom), humankind had generated approximately five billion gigabytes of information. Now, we create that amount of information every 10 minutes. "But our ability to take in and sift through [it] remains as it was 70,000 years ago, at the outset of the cognitive revolution," says Kenner.

Even once my thumb has stopped twitching for the phantom apps on my phone, I find my mind still wanders in search of brain snacks. At one point, I even find myself scouring my email spam folders for titbits I might have missed, like a rat in the bins.

"This is entirely common," says Kenner. "You have been roped in by addictive design that keeps you scrolling, browsing, clicking and responding by using the exact same techniques that casinos use to design slot machines. Once you turn off the applications that provide your dopamine fix, you simply try to get it through other applications."

So-called "digital vegans" go as far as cutting the Big Five tech giants – Amazon, Facebook, Google, Microsoft, and Apple – from their lives altogether, setting up custom-built virtual private networks (VPNs) to block them from getting their money, data and attention.

I'm happy to just have a more balanced digital diet. By the beginning of March, my screen time was down by an average of two hours a day. I don't know that my mind is necessarily sharper, but it feels more my own, so I decide the Instagram app can stay gone.

Others are trying to get in on the act. The author of that Medium essay, Michael Moskowitz, the former chief curator at eBay, launched Moodrise in January. It is described as "the world's first Digital Nutrition app", designed not to get people off their phones, but to consume something different.

Split into six desirable moods (from focused to happy), it streams content that supposedly releases the neurotransmitters that engender them. Videos of the fractals found in nature – a murmuration of birds, or an avalanche crumbling like icing sugar, for example – trigger the release of gamma-aminobutyric acid (GABA), the chemical responsible for feelings of calm, comfort and serenity. Loops of puppies having their tummies stroked, meanwhile, spark oxytocin, the bonding chemical that increases feelings of connection.

There seems a deep irony in turning to yet more tech to deliver us from digital junk and the things we're missing from real life? "There's always someone out there trying to make a buck on the issues people run into," says Kenner. "It may work, but like Weight Watchers, it is still first and foremost a commercial enterprise.

"The scariest thing about social media is it leads your body to believe you have got something you need, without actually delivering it. Humans are social animals and we need social cues, interaction, balancing, dialogue and grouping to thrive."

Social media looks like it is providing this, but measuring oxytocin levels before, during and after usage shows it doesn't work.

"It's a little like trying to convince yourself that you can slake your thirst by looking at a picture of a glass of water," he concludes. "Michelangelo or Leonardo may have been terrific painters, but even they could not make that trick work."

How to balance your digital nutrition

Have a non-tech lunch hour. Turn off your phone, put it in a drawer and enjoy your lunch without it.

Schedule set times to look at social media, so it doesn't become your default "brain snack" whenever you're not doing something else.

Batch your emails and only tackle them at certain times of day. "This is a calm inbox," reads Brewer's email post-script. "You will generally get a reply within 24 hours on business days."

Try phone-fasting. In his latest book, The Stress Solution, Dr Rangan Chatterjee recommends a 4:1 approach – putting your device in flight mode for one hour of every four that you are awake.