On August 21 2017 at 4:30am, I roused my 7-year-oLd son, Simon, from his bed in a creaky hotel in Cheyenne, Wyoming. In a few hours, a rare solar eclipse would occur. Dawn revealed a brilliant blue sky, promising a clear view of totality. Simon was thrilled; I felt indifferent. Neither of us had ever witnessed an eclipse. But my expectations were tempered. I’d been to Machu Picchu, Victoria Falls, the Himalayas. An eclipse is a mere two minutes of solar showmanship. Big whoop.

We scouted all morning for the perfect viewpoint, driving pockmarked jeep roads before settling atop 6,400-foot Prairie Dog Hill. Wearing protective glasses at first, we watched the sun become a black disk, a void in the heavens. Yellow tendrils danced along its circumference. A starry night sky appeared—even though it was 11:44 a.m. Crickets started chirping, and then a crimson glow swept the horizon, creating the startling illusion of a 360-degree sunrise.

Witnessing my child’s pure and unmitigated elation ended my indifference, as did this cosmic spectacle that seemed to slow time. I was simultaneously energized, intellectually aroused, and overcome with unbounded optimism—as if life had suddenly revealed its infinite potential. There were about a dozen other onlookers nearby, and I had the inex- plicable urge to hug each and every one of them. Nothing had ever made me feel like this.

Scientists have been study- ing the effects of awe for some time. In 2003, psychologists Dacher Keltner and Jonathan Haidt defined the emotion as being somewhere between “the upper reaches of pleasure and…the boundary of fear.”

“Awe is triggered by the perception of either perpetual or conceptual vastness,” says

David Bryce Yaden, Ph.D.(c), a research fellow at the University of Pennsylvania who studies brain responses to transcendent experiences. The ocean, the Grand Canyon, and the Milky Way engage the perpetual form, which is largely visual and nature- based, he explains. Stirring TED Talks, music, and art kindle the conceptual variety, which is more cerebral and subjective to the person experiencing it. Both blow your mind, but in very different ways.

And here’s the best part: Awe is not only mentally invigorating but also appears to be physiologically beneficial. Research shows that it may lower your risk of inflammation, ease stress, aid your immunity, enhance your well-being, and even improve your marriage.

Compared with toiling away on a tread- mill or choking down kale, feeling awe is an easy and fun way to improve your mental and physical health. Here’s how it does all that, and how to use it to make your health—and entire life—more awesome.

Chronic inflammation in the body is associated with many illnesses, including cardio- vascular disease, arthritis, diabetes, cancer, and Alzheimer’s. In 2015, Jennifer Stellar, Ph.D., an assistant professor of psychology at the University of Toronto, analyzed how various

emotions are associated with the blood protein interleukin- 6 (or IL-6), a common indicator of inflammation.

Stellar evaluated seven emotions—joy, love, pride, amusement, compassion, contentment, and awe. Partici- pants completed a survey on how often and intensely they experienced these emotions. Then Stellar collected saliva samples to determine their IL-6 levels. She found that peo- ple who reported feeling more awe had lower levels of IL-6.

This was the first evidence of a potential biological path- way between awe and reduced inflammation. And of those seven emotions, awe was the strongest predictor of lower levels of IL-6. Stellar is now tracking IL-6 in real time with people in the midst of awe- inspiring moments.

Every morning as Neha John-Henderson, Ph.D., com- mutes to work, she makes a special effort to appreciate the stunning mountain scenery. An assistant professor of psychology at Montana State University in Bozeman, she studies the influence of stress on human immunity. And she’s learned that the awe she experiences may affect how likely she is to become ill.

The reason, once again, is inflammation. People who report high levels of stress tend to have higher levels of inflammation in their immune system; but John-Henderson’s research found that people who experienced more awe had lower levels, perhaps because awe enables you to view stress from a healthier perspective.

Not only can awe be used to proactively manage stress, but it can also help depressurize you during anxious times; in fact, says John-Henderson, that’s when it may have the most anxiety-reducing benefit. Feeling stressed?

Melanie Rudd, Ph.D., an assistant professor of marketing at the University of Houston, has done research in the Swiss Alps. There she put her volunteers either in a parking lot, which she describes as a “low-awe condition” (duh), or on a mountain summit, a “high- awe condition with this glorious panoramic landscape.” She provided ample time for each group to take in the views and complete a short survey. Then she offered a choice of thank- you gifts: a bag of prepackaged trail mix or a creative chance to make their own using the same fruit and nut selections. Those who’d ridden the gondola up the mountain overwhelmingly chose the do-it-yourself option.

Rudd later reinforced these findings by showing TV commercials that were either happy, neutral, or awe-inspiring (with images of waterfalls, whales, and astronauts in space) to another set of volunteers. “Then we asked if they wanted a coupon to buy premade chocolates for a loved one for Valentine’s Day, or a recipe to make the chocolates themselves,” she says. Those who viewed the awe-inspiring commercial were more inclined to embrace their inner chocolatier.

So what’s going on here? Rudd showed that the experience of awe shakes our confidence in our existing knowledge and makes us more motivated to learn. And what do we do with this desire to learn? As her findings indicate, we make stuff. “Awe can enhance people’s openness to learning, and as a consequence they want to create,” she says.

More than 21 percent of American adults will experience a mood disorder at some point in their lives. New science suggests that regularly experiencing awe might provide a potent boost to your mood and sense of well-being.

Last year, researchers scanned the brains of attendees at a weeklong spiritual retreat where they were expected to have many awe- inducing experiences. Scans from before and right after the event suggested significant changes in the function of serotonin and dopamine, neurotransmitters that are part of the brain’s reward and emotional systems.

Other studies have found changes in the autonomic nervous system that connects the brain and body. Normally, the sympathetic (arousal) system and the parasympathetic (quiescent) system are yin and yang; when one rises, the other falls, maintaining your body’s overall equilibrium. But that all changes with awe, because these two systems seem to elevate simultaneously.

“So you not only have this incredible rush of energy and joy,” explains study coauthor Andrew Newberg, M.D., a neuroscientist at Thomas Jefferson University, “but also a tremendous sense of calmness and bliss.” The feeling of connectedness that awe induces is another possible mood lifter, adds Yaden, who was also involved in the research.

Loads of scientific evidence trumpets the health benefits of spirituality—churchgoers live longer, it can enhance mental health, and it has been associated with better self- reported physical health in cancer patients. Some doctors credit the placebo effect: If you’re convinced that your god has healing powers, then so is your immune system, which responds accordingly by get- ting you well. But you don’t have to be born again to enjoy the benefits of spirituality. Several studies illustrate that awe can produce spiritual or religious-type experiences.

In a series of experiments, Piercarlo Valdesolo, Ph.D., an associate professor of psychology at Claremont McKenna College in California, played clips from the BBC’s Planet Earth to people who were later questioned about their beliefs on two competing evolutionary theories. One theory emphasized the role of randomness in natural selection; the other depicted evolution as “Awe is the emotional vehicle that makes you feel connected to something larger than your- self,” says Piff. “Awe makes you feel less entitled, less narcissistic, and more compassionate because you feel less important. That’s the part that matters for kindness and generosity.”

Astronauts who view Earth from space often report feeling a oneness with humanity and the universe. It’s a shift in mindset that psychologists call the “overview effect.” Accord- ing to Soviet cosmonaut Boris Volynov, who flew two Soyuz missions, “you begin to be more kind and patient with the people around you.”

Dr. Newberg mapped blood- flow in the brains of people experiencing a spiritual sense of awe. He found that the region in charge of establishing our sense of self in the world partially shuts down. Meanwhile, the area controlling emotions and arousal fires up, releasing feel-good dopamine. In

short, awe dissolves the boundary between self and others. We become less self-absorbed and more focused on the emotional needs of others.

Awe’s impact on intimacy soars even higher when people witness a mind-blowing event together. “Anytime you have a shared emotional experience, it’s a stronger experience and it starts to define the relation- ship,” says Valdesolo. Seeking out awe-inspiring moments with anyone you want to feel closer to induces feelings of open-mindedness and affection, he explains.

“It may override the boredom, the routine you get into,” adds awe researcher Amie Gordon, Ph.D. “It might help you to see that person in a different light, and feel closer and connected.”

My son and I reminisced about our eclipse odyssey for months. The next total solar eclipse visible from the United States will be on April 8, 2024. You can bet we’ll be there. 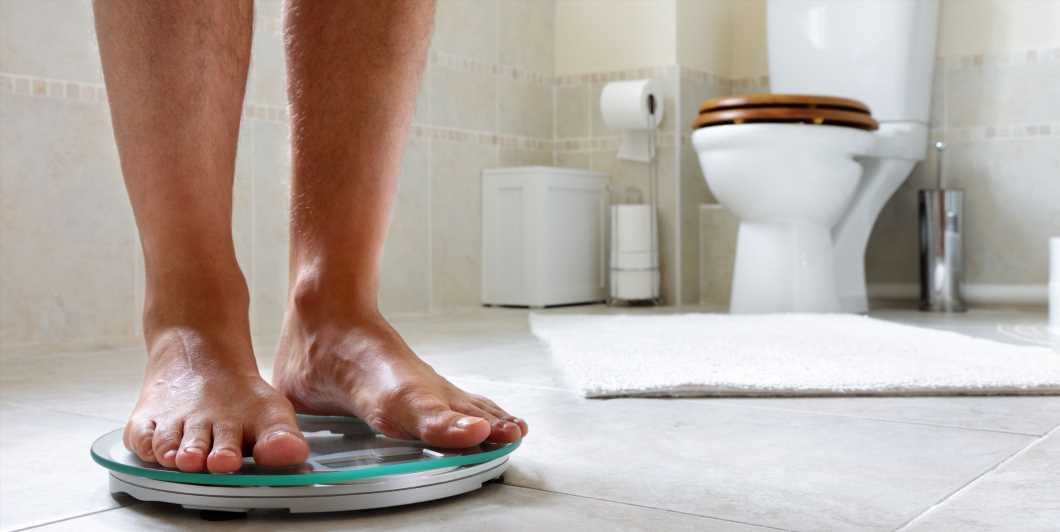 What Happens to Your Weight When You Poop

Today’s Sheinelle Jones ‘Started Crying’ After Vocal Cord Surgery: I Was ‘Thankful to Be ‘Awake’’
Medications