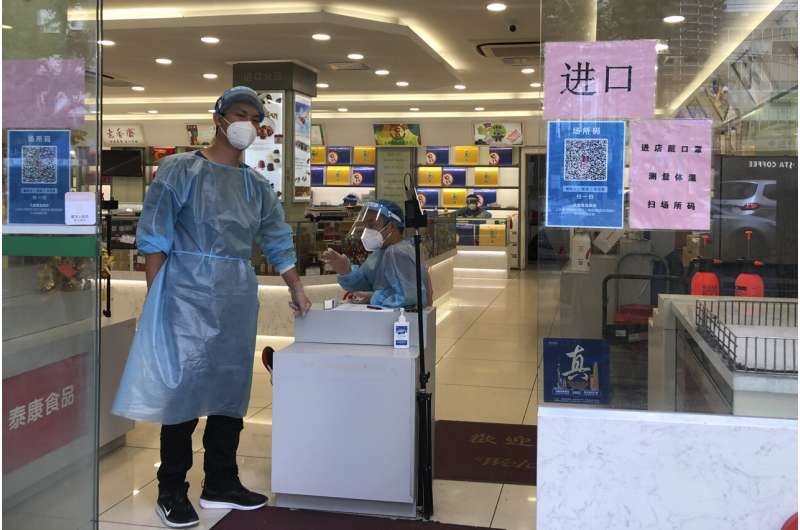 Hong Kong authorities are considering implementing a health code system in the city that would restrict the movements of those infected with the coronavirus and overseas arrivals, as infections rise again.

The system is similar to that of mainland China, in which a red code completely restricts a person’s movement, a yellow code is for partial restriction, while a green code means freedom of movement. The colors would appear on Hong Kong’s risk-exposure app LeaveHomeSafe.

Hong Kong’s health chief said Monday that if such a system is implemented, real-name registration would be required and those who test positive for COVID-19 would be given a red code “to identify those who have been infected” and prevent them from interacting with the community.

Authorities are also considering reducing the current seven-day hotel quarantine for incoming travelers, and moving part of it to home isolation and health monitoring.

Such travelers may be issued yellow health codes, and will not be allowed to remove their masks or enter high-risk premises such as hospitals and elderly care homes.

“We hope that we will be able to enforce the home quarantine in a more effective way and try to prevent these people from causing community outbreak,” Lo said.

Starting Friday, all those who are given a home isolation order will also be issued electronic wristbands to ensure that they stay quarantined.

The city’s health code measures are being considered amid an increase of COVID-19 infections after the city battled its fifth and worst outbreak that infected over a million people and killed over 9,000.

Hong Kong recorded over 2,800 cases on Monday, as well as seven deaths.

Lo dismissed concerns that the measures would invade privacy, saying that real-name registration required for the health app is to help law enforcement and not to restrict freedoms of those unaffected.

“I’d like to say that we would make use of technology to put in place a precision strategy,” he said. “This is to reduce our cost in our fight against the epidemic and to maximize effectiveness.”