Those of us with desk jobs can take heart. According to new research, exercising for just 30 minutes each day can mitigate many of the risks associated with sitting too much.

The average Australian worker spends more than six hours a day sitting which makes us a nation of, what researchers call, “high sitters”. High sitting has been linked with everything from cancer and obesity to heart disease and diabetes and even depression. 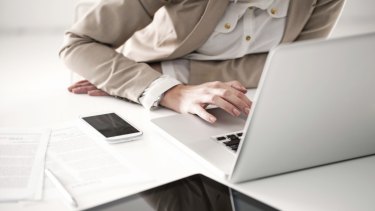 Standing up and moving more can eliminate the health effects of sitting all day long.Credit:Lyn Osborn

The study, published on Tuesday in the Journal of the American College of Cardiology, sought to understand whether it was sitting in itself or the lack of physical activity that led to increases in cardiovascular disease and premature death.

So researchers from the University of Sydney followed nearly 150,000 people aged over 45 for nine years.

They found that high sitters who did not exercise were 107 per cent more likely to die from cardiovascular disease than those who did at least one hour physical activity per day and sat less than four hours.

Standing up more reduced cardiovascular risks among those who sat four hours or less a day, but it did not have a significant effect among the high sitters. The researchers suggested this may be because those who were already sitting too much need to do more than just stand up.

Sitting less is important, they said, but it is not enough in itself; we need the added hit of exercise to make a real difference to our health.

Previous research has found that an hour of exercise each day can offset the risks of being a high sitter, but few Australians meet the exercise guidelines of 30 minutes a day, let alone one hour a day.

The new study found that the high sitters who incorporated just 20 to 40 minutes of moderate intensity exercise – like walking – into their day, drastically reduced their risk.

“Meeting the minimum recommendation of 150 minutes of physical activity per week substantially weakened or even eliminated the association of sitting with risk of death and death from cardiovascular causes,” said lead author Professor Emmanuel Stamatakis.

The findings are in contrast to a small study published last week which concluded that sitting too much makes our bodies “resistant” to the positive health effects of exercise.

In that study, 10 participants were asked to sit as much as possible and move as little as possible for four days. They were then given a thickshake of icecream and light cream to see how it affected their metabolism (as you might suspect, their triglycerides and blood sugars spiked while their insulin sensitivity dropped).

The experiment was then repeated, but on the fourth night, the participants spent an hour running on a treadmill. The next morning , they drank the same thickshake and, despite the burst of exercise, their blood sugars, triglycerides and insulin levels did not improve.

The researchers concluded that that being sedentary for long periods of time makes us “resistant to the usual metabolic improvements after acute exercise".

What this study really tells us is that we need a longer and/or a more intense and/or a second exercise session.

Stamatakis says that while the study is “useful” in showing the short-term effects of sitting day after day on our blood sugars and fats, it “does not reflect real life” nor show the impact of regular exercise on long-term health.

“Even if their results were to be taken at face value and an one-hour session of exercise does not undo the consequences of excessive sitting, what this study really tells us is that we need a longer and/or a more intense and/or a second exercise session,” Stamatakis said, “not that the benefits of exercise are undone.”

Stamatakis added that if all Australian adults sat less and moved more we would save “tens of billions of dollars in healthcare” within a few years.

“The Australian Institute of Health and Welfare has calculated that 13 per cent of physical inactivity burden could be reduced if everyone did an extra 15 minutes of brisk walking on 5 days/week,” he said, adding that the type of exercise we do matters less than the fact that we get up from our chairs each day and do it.