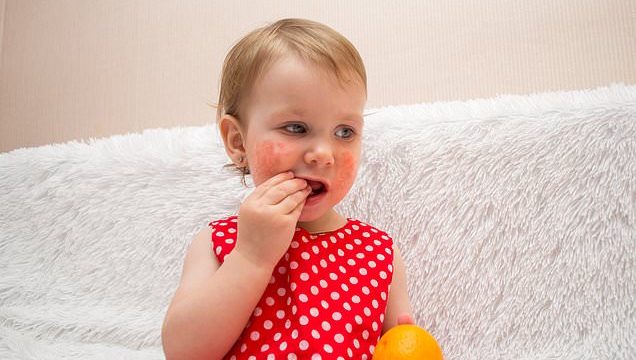 Heavier babies are more likely to have food allergies and eczema, study claims

The heaviest babies are more likely to suffer childhood food allergies or eczema, a study suggests.

For every extra 2.2lbs (1kg) of weight, a baby’s risk of allergies and eczema increases by 44 per cent and 17 per cent, respectively.

But following the study, mothers are being urged to ‘seek advice’ if their baby is on the heavier side. 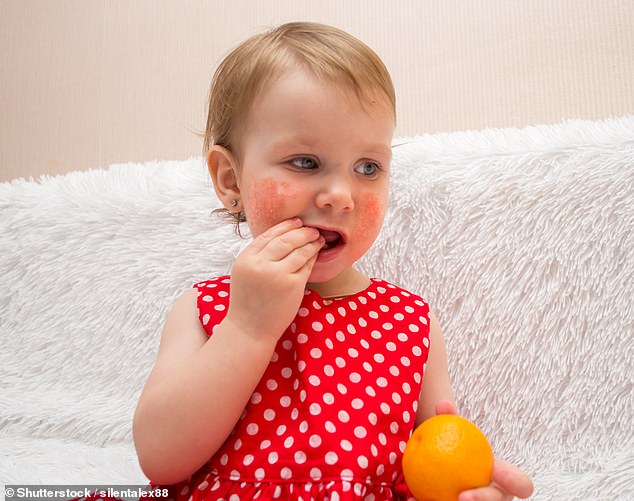 Birth weight has been linked to food allergies and eczema. Stock photo child with eczema

Dr Kathy Gatford, lead author of the study at University of Adelaide, said: ‘The main message for mums is that big babies are at increased risk of allergy.

‘So mothers with big babies should seek advice on modifying environmental factors to reduce those risks.

‘It is increasingly clear genetics alone do not explain risks of developing allergies, and that environmental exposures before and around birth can program individuals to increased or decreased risk of allergies.’

The team collected information from 42 past studies involving millions of people, most of whom were European.

The majority of people assessed were young children, according to Dr Gatford.

Eczema is an inflammatory condition of the skin that leads to redness, blistering, oozing, scaling and thickening.

It usually appears in the first few months of life and affects around 10 per cent of babies.

Eczema’s cause is not fully understood but it is thought to be brought on by the skin’s barrier to the outside world not working properly, which allows irritants and allergy-inducing substances to enter.

It may be genetic due to the condition often running in families.

As well as their skin being affected, sufferers may experience insomnia and irritability.

Many factors can make eczema worse. These may include:

There is no cure for eczema, however, 70 per cent of childhood sufferers no longer have the condition in their teens.

Patients should avoid known triggers for flare ups and use emollients.

She said: ‘We analysed the associations between birth weight, corrected for gestational age, and the incidence of allergic diseases in children and adults.

‘We found that increased birth weight has no influence on the risk of childhood hay fever.’

On the other hand, premature babies were protected against developing allergies. However, it is well established they are at a heightened risk of other diseases.

‘We don’t want small babies but we would like to understand how poorer growth or slower growth before birth is protective against allergy,’ Dr Gatford said.

Both food allergies and eczema are considered immune-mediated diseases caused by a combination of genes and external factors.

The team said it is possible babies with a lower birth weight have a lower immune system, which normalises as they age and therefore does not affect them growing up.

They may also have a more favourable balance of immune cells that protect them against pathogens.

It is not clear if the risks persist as a person grows up or if they are just present in childhood.

‘Things like an egg allergy a lot of kids will grow out of, whereas peanut allergies are much more likely to persist.’

The findings were published in the Journal of Allergy and Clinical Immunology.

More than 150million Europeans suffer from chronic allergic diseases, according to Allergy UK.

The UK has some of the highest prevalence rates of allergic conditions in the world, with a staggering 44 per cent of British adults suffering from at least one allergy.

Almost one in 12 young children suffer from a food allergy and charities believe they are becoming increasingly common.