It is a bountiful time for plant-based milks, with new varieties of nut, seed, grain, legume and now vegetable milks showing up on store shelves every year. Now comes potato milk.

The product, made by the Swedish company Dug Drinks, is already being sold in Britain and will make its way to the United States sometime this year with further plans of expansion across the globe. And according to a new report released by British supermarket chain Waitrose, potato milk is “set to dominate coffee shop menus in the coming months” — however unlikely that may sound. 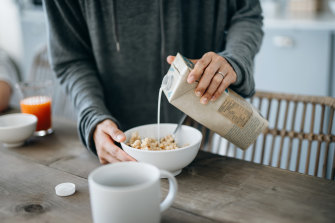 In August, Sarah Bentley, 40, heard about Dug and its potato milk. Bentley, who lives in London and runs the plant-based-cooking school Made In Hackney, was immediately interested.

“I was definitely excited, as it was new, but it doesn’t naturally sound appetising,” she said. “You imagine gunky potato water, which of course would be gross.” Bentley and some of her cooking-school colleagues tried to make their own potato milk, with disappointing results. “It wasn’t very delicious, but I’m definitely keen for a rematch, as I can see its potential. The more viable alternatives to mass-produced dairy, the better.”

Bentley is far from alone in that sentiment. During the past decade, interest in the health, environmental and ethical benefits of a vegetarian or vegan diet has helped spawn a proliferation of milk substitutes. The aisles of grocery stores and the counters of coffee shops are populated with milks made from oats, almonds, cashews, macadamia nuts, hemp seeds, sesame seeds, peas and flaxseeds.

You might think we have reached peak plant milk, but you would be wrong.

“I don’t think there is an end in sight for dairy alternative innovation — or at least not anytime soon,” said Sydney Olson, a food and drink analyst for Mintel, an international market research firm.

Plant-based foods are “a really hot topic at the moment,” said David Julian McClements, a professor at the University of Massachusetts Amherst. He has worked as a food scientist for more than 20 years, but in the past five his research has focused entirely on plant-based foods, he said, “because that is one of the main trends in the food industry at the moment for sustainability, ethical and health reasons.”

Irregular shopping habits that began during the pandemic, with panic buying and supply-chain issues, have also pushed more people to buy plant-based milk, said Denise Purcell, vice president of content and education for the Specialty Foods Association, and an in-house expert on trends.

“The shelves were empty, and people were stocking up because they knew they were going to be at home, and it was an opportunity if they couldn’t get their regular milk product,” Purcell said. “It was sort of like a gateway. They would try it, and it would lead them to try other products.”

The pandemic has also led more people to cook at home, using both dairy and plant milks. But Olson, the food and drink analyst, said that while sales of dairy milk are expected to return to a pre-pandemic trajectory of decline, nondairy milk will continue to ride the surge of interest in plant-based diets.

“The shelves were empty, and people were stocking up because they knew they were going to be at home, and it was an opportunity if they couldn’t get their regular milk product. It was sort of like a gateway. They would try it, and it would lead them to try other products.”

Plant milks have existed for centuries in cultures worldwide. Horchata, a creamy beverage made with ground tiger nuts (a kind of tuber), originated in North Africa a millennium ago, and it has become popular in Spain and Latin America. Coconut milk, made from the liquid of grated coconut meat, has been used for centuries in South Asia, South America and the Caribbean.

Native Americans, especially in the northeastern United States, have used nuts to make nut butter and milk for infants. Almond milk has been a staple ingredient in North Africa, Europe and the Middle East for nearly 1000 years. As almond milk was becoming popular in Europe, soy milk use was growing in China — and by the 1970s and ’80s, soy milk could be found in health food stores throughout Western nations.

Today, many milks are made by soaking, grinding, pressing or blending the nut, seed or vegetable into a slurry that is then strained and sometimes mixed with oils or other ingredients that help emulsify it for a creamier texture. Because the process makes liquid from a wide array of plant sources, the number of blends and varieties of nondairy milk is nearly limitless.

But for many people, cow’s milk is still the standard for taste, and companies are always tweaking their products to be more similar to the dairy products that most are used to, McClements said.

“That’s often challenging,” he added, “because obviously plant ingredients are very different from animal ingredients. I think we definitely will see improvements in the future. It’s still quite early.”

This article originally appeared in The New York Times.