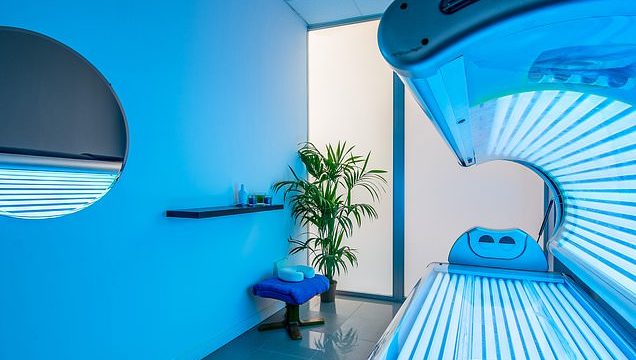 Ministers will consider banning sunbeds in the UK in a bid to cut cancer cases and deaths by thousands.

If the move went ahead, it would see Britain follow in the footsteps of Australia and Brazil.

Ms Owen said while unprotected exposure to the sun can leave someone vulnerable to skin cancer, it is not the only risk factor as she raised the case of a constituent with melanoma. 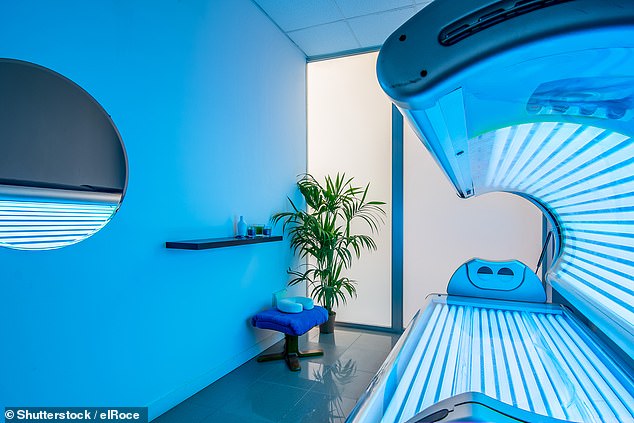 Researchers from the University of Manchester tracked the projected impact of the move on the more than 600,000 18-year-olds living in England. Their modelling suggested an outright ban on indoor sunbeds would result in over 1,000 fewer cases of melanoma and 200 fewer melanoma deaths in their lifetimes

Mr Morris replied: ‘Given the weather we’re experiencing at the moment, issues to do with melanoma are high on the priority list.

‘I’m very happy to meet with the honourable lady to discuss the specific issues she’s raised in relation to sunbeds.’

Melanoma UK chief executive Gillian Nuttall said melanomas and other skin cancers are ‘increasingly common’ in the UK, with more than 100,000 cases diagnosed every year.

She added melanoma kills more than 2,500 people each year in the UK and treatment of skin cancers ‘places a heavy burden’ on the NHS.

‘Logically, it is therefore possible to reduce the burden of skin cancer by banning the use of commercial sunbeds.

‘This is not a new idea: Australia and Brazil banned them many years ago.

‘The UK must act now. Understanding the cost and consequences of a ban on sunbeds in the UK would provide useful evidence for healthcare decision makers.

‘A ban on sunbeds along with a public health campaign would save lives and reduce NHS treatment costs.’

Gary Lipman, chairman of the Sunbed Association, said there is ‘no robust scientific evidence that demonstrates a causal relationship between responsible sunbed use by those able to tan and melanoma’.

He added: ‘Sunbed use in the UK is regulated and members of the Sunbed Association operate to our strict operational code of practice.

‘We very much look forward to having the opportunity to meet with Sarah Owen MP and minister James Morris to present our position.’