Cancer symptoms: Top 14 early signs to look out for

Ellie Miller, 11, is now undergoing chemotherapy to treat her nephroblastoma, a kidney cancer, which caused a swelling in her stomach when she was just four. She has been in and out of hospital over the past three years and has had multiple operations, after the cancer spread to distant organs, including her lungs.

The youngster is now desperate for her dream holiday to Greece – and her family is appealing for crowdfundings donations to help make it come true.

Mum Amie Fletcher, 31, first noticed a growth in her daughter’s stomach when she was just four. Doctors repeatedly assured her it was nothing more than constipation, until a school nurse suspected something more serious and liaised with the family GP when Ellie was eight.

Amie, from Crewe, Cheshire, said: “I noticed something wasn’t looking right with her stomach. There was a growth and it was swollen, and I kept taking Ellie to the doctor and they kept saying she was fine, and it was constipation.

“She was about four then. It was only until a nurse at Ellie’s school agreed with me some years later. She helped me with doctors to get Ellie assessed in the end but she was eight by then.” 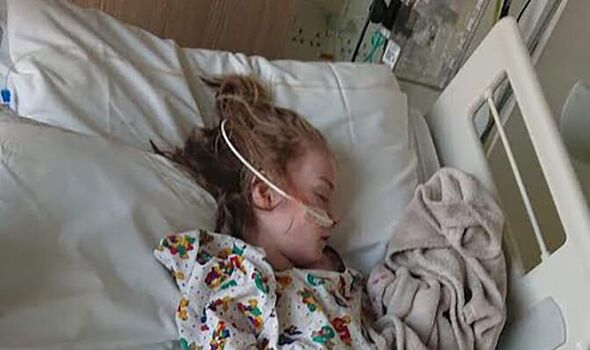 Crucial surgery to remove the cells from the lungs was successful but her right lung is now the size of a ping pong ball, Amie said.

The mum, who is Ellie’s full-time carer, said: “When we were told it was cancer, it broke us. It was extremely difficult and emotional. It broke me and I cried.

“She has been in and out of hospital since then. I’ve lost count of the number of operations but it must be at least 10. The tumour was the size of the average watermelon so there have been lots of procedures.

“But Ellie’s really strong and brave. She takes it all in her stride and, to be honest, it has given me that motivation too, especially when it has been so tough.”

Ellie has always wanted to visit Greece since studying Ancient Greeks at school just months before her devastating diagnosis.

Her dream has helped keep her strong during her chemotherapy, Amie said.

The mum of two, who is Ellie’s full-time carer, continued: “She loves history and really wants to go to Greece. It’s been her dream ever since studying the Ancient Greeks at school in Year 3 just before the diagnosis.

“She was pretty hooked on it at the time, so I know it would make her so happy.

“It would be a one-in-a-million moment for her. She has been wanting to visit Greece for years throughout all this period.”

The youngster has even identified a resort in Rhodes, picked specifically for its expansive water park.

Amie, who also lives with 34-year-old partner Lee Miller and their son Hyde, 13, said: “Ellie’s best and happiest moments have been in water. She loves water. She is determined to visit this water park because it would mean a lot to her.”

They are asking for sponsorship to help raise money Ellie and her family can use for their trip to Greece.

Dad-of-three Matty, also from Crewe, said: “We have kindly volunteered to take up this challenge for the brave, courageous young girl Ellie. Ellie and her family have been a part of our lives for a long time.

“She has an incredibly rare cancer. Ellie and her family were given the terrible news she had been suffering with the Wilms tumour all her life and went undiagnosed, to the point this tumour had grown to the size of a watermelon. This has led to plenty of operations.

“She is a real true inspiration to my family and our three daughters. We aim to make her proud and get her on that beach in Greece.”

Only around 85 children between the ages of 0 and 14 years are diagnosed with nephroblastoma, known as Wilms tumour, each year in the UK.

To donate to the appeal, visit this link – https://www.gofundme.com/f/ellies-dream-holiday