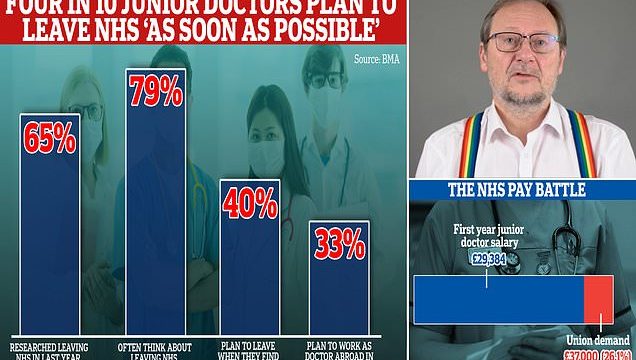 Thousands of junior doctors are plotting to leave the NHS within the next year, damning survey results suggest as unions warn the mass exodus will leave the NHS ‘simply not able to cope’.

The British Medical Association (BMA), which represents 45,000 junior doctors in England and has been described as ‘militant’, surveyed nearly 4,000 members on whether they looking to leave the NHS.

Results show that four in 10 plan to quit the health service ‘as soon as they can find another job’, while a third plan to move abroad. The union blamed poor pay and working conditions as the reason behind the trend.

It comes as the junior medics, who earn up to £58,000 per year, are set to be balloted in less than a fortnight on whether they want to take industrial action over pay. The BMA is seeking a 26 per cent salary uplift after more than a decade of ‘pay erosion’. 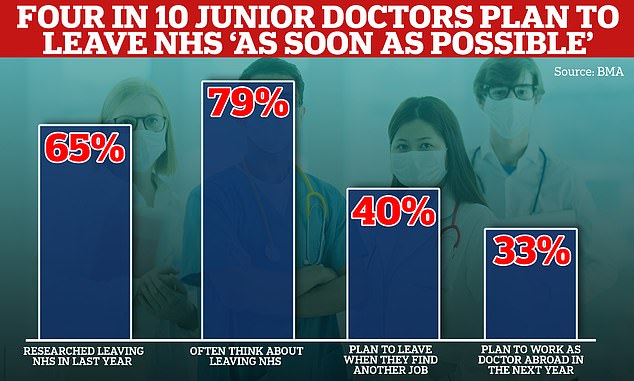 The British Medical Association (BMA), which represent 45,000 junior doctors in England, surveyed nearly 4,000 members on whether they looking to leave the NHS. Results show that four in 10 plan to quit the health service ‘as soon as they can find another job’, while one-third plan to move abroad. The union blamed poor pay and working conditions 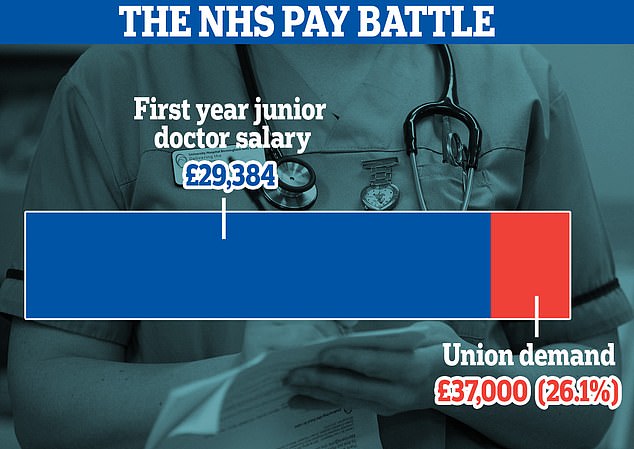 The British Medical Association is campaigning for a 26 per cent pay rise for junior doctors to compensate for what it says are 15 years of real term pay cuts. A doctor in their first year currently earns £29,384 so would earn about £7,800 more if union demands are met. Figures for more senior junior doctors would vary

The British Medical Association surveyed its junior doctor members in November and December.

In response to a question on whether they planned to work as a doctor in another country within the next year, one third of the group agreed.

Australia and New Zealand were the top-choice destinations.

The BMA, which surveyed its junior doctor members in November and December, asked to what extent they agreed they would leave the NHS ‘as soon as they could find another job’. Forty per cent agreed.

When this group were asked why they were eager to leave, around eight in 10 blamed pay, specifically the ‘pay erosion’ over the last 15 years, their two per cent rise for 2022/23 and their current salary level. Some 83 per cent also pointed to deteriorating working conditions.

The BMA said junior doctors have faced ‘some of the steepest cuts to their pay of any public sector’ as it has been slashed by 26 per cent over the last 15 years.

And their two per cent uplift this year amounts to a 10 per cent real terms pay cut when ‘soaring inflation’ is taken into account, it said.

Separate survey results from the BMA suggest that more than three quarters of junior doctors are cutting back on buying food and heating their homes to help make ends meet.

In response to a question on whether they planned to work as a doctor in another country within the next year, one third of the group agreed.

Australia was the top destination, with 42 per cent of the cohort planning to move there.

New Zealand (20 per cent), the Middle East, Canada and Europe, excluding the UK, (each 9 per cent) were also popular. One in 20 said they planned to go to the US.

There were 4,553 respondents to the survey overall.

Professor Philip Banfield, chair of the BMA’s council, said the situation was ‘severe’ and 2023 will be another “difficult year” for the medical profession.

He said: ‘The health service will simply not be able to cope.

‘For decades the NHS was the envy of the world.

‘But without our doctors’ expertise, the country will get sicker.

‘We will not accept impoverished healthcare for our nation, or acquiesce to those looking to slash pay and drive down living standards for NHS staff.

‘In 2023 we will stand together with patients, an organised workforce ready to act.’

‘If our Government doesn’t act now, it doesn’t take a genius to see where this will lead: an exodus of junior doctors to foreign countries, with the ones who stay in the NHS facing an ever-increasing workload — until they feel they have no option but to leave too or get burnt out.

‘If the Government wants “move to Australia” to stay off the New Year’s resolution lists of junior doctors this year, it is going to have to start by reversing the 26 per cent real terms pay cut they have endured since 2008 – or at the very least start speaking with us and stop ignoring our repeated calls to address our pay.’ 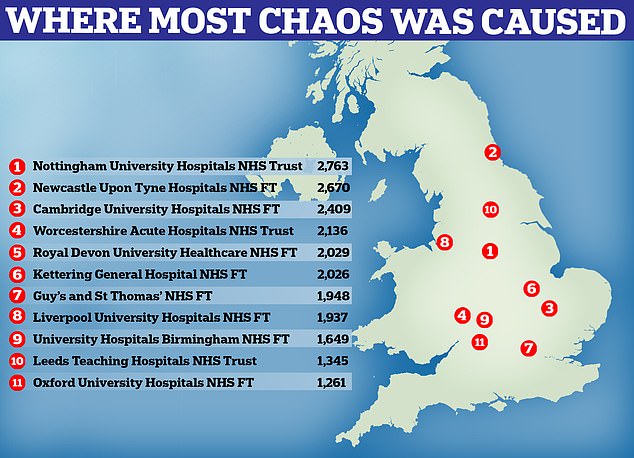 Some 4,560 inpatient procedures were rescheduled because of the Royal College of Nursing action over two days in December. This includes routine procedures such as hip and knee replacements, which require an overnight stay in hospital. Another 25,000 outpatient appointments were postponed across England because of the walkouts. These can include appointments, X-rays and minor procedures. Most of the chaos was caused at Nottingham University Hospitals NHS Trust (2,413), followed by Newcastle-Upon-Tyne Hospitals NHS Foundation Trust (2,313). Map shows total for both inpatient and outpatient appointments cancelled 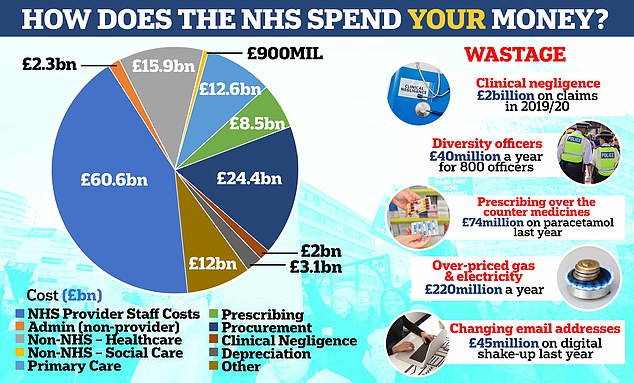 The NHS spends around £150billion-a-year, of which just under 43 per cent is spent on staff wages. Graphic shows: A pie chart of Department of Health and Social Care revenue spending on the NHS (left) in 2019/20 and areas where expenditure is seen to have been wasted (right) 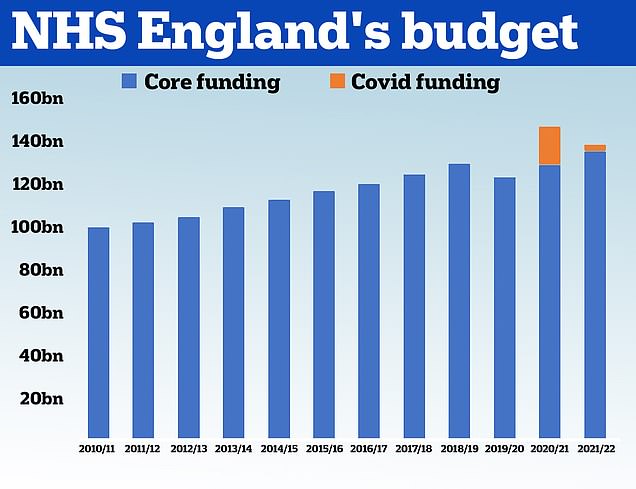 HM Treasury data shows the NHS received £100.4billion in 2010/11 and its budget had grown steadily until 2019. In 2020, the NHS was given £129.7billion of core funding for its usual services, which was topped up with an extra £18billion to help with the pressures from the pandemic. For 2021/22 the Treasury said the health service is set to receive £136.1billion pounds of core funding, as well as £3billion to help with the Covid recovery

We’ve been here before! What happened the last time junior doctors went on strike

Junior doctors in England went on strike for one day per month in the first four months of 2016 to protest against changes to their contracts proposed by then Health Secretary Jeremy Hunt.

In November 2015, almost all of the medics – 98 per cent – voted in favour of industrial action. 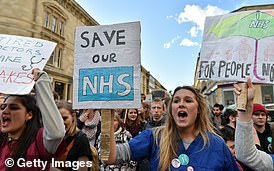 On the final strike day junior doctors also refused to provide emergency care, the first time this had ever happened.

The dispute only formally ended in 2019 when junior doctors were offered an 8.2 per cent pay rise over four years.

They’re now contemplating taking action once more after the Government refused to offer junior doctors a 26 per cent pay rise, which they argue is needed to compensate for years of below inflation salary increases.

‘Our multi-year pay deal with the BMA is increasing junior doctor’s pay by a cumulative 8.2 per cent by 2023.

‘We have also invested an additional £90million to provide the most experienced junior doctors with higher pay, increased allowances for those working the most frequently at weekends, and increased rates of pay for night shifts.

‘There are record numbers of staff working in the NHS, and we are committed to publishing a comprehensive workforce strategy next year.’

Additional results from the survey, released yesterday by the BMA show that 79 per cent of junior medics said they ‘often think about leaving the NHS’.

And 65 per cent reported that they had ‘actively researched leaving the NHS in the last 12 months’.

The BMA announced in October that it would ballot junior doctors – which include all doctors until they become consultants, GPs or specialists – from January 9.

The union has previous said it is ‘deeply concerned’ that pay erosion will ‘continue to drive doctors out of the profession, leading to a vicious cycle of dwindling staff numbers and worsening patient care’.

It is calling on the Government to commit to a 26 per cent pay rise for junior doctors. This would, in theory, equate to around an extra £7,800 for doctors in their first year of training.

Junior doctors in England last went on strike for one day per month in the first four months of 2016 to protest against changes to their contracts proposed by then Health Secretary Jeremy Hunt.

On the final strike day junior doctors also refused to provide emergency care, the first time this had ever happened.

The dispute only formally ended in 2019 when junior doctors were offered an 8.2 per cent pay rise over four years.

It comes as strikes are also being considered by doctors in Scotland and Wales.

BMA Scotland announced earlier this month its junior doctors would be balloted in the first quarter of 2023 on a potential strike, after talks on pay with the Government collapsed.

And BMA Cymru announced that doctors in Wales were considering going on strike for the first time.

Almost two-thirds of the just under 1,000 hospital doctors surveyed by the union this month said they would be willing to take some form of industrial action, including strikes, over their current pay and conditions.

The BMA’s Welsh Council chairwoman, Iona Collins, called the result of the survey ‘upsetting to all’ and said it is ‘gut-wrenching for doctors to consider walking away from work’.

If junior doctors backed strike action, it would pile further misery to the health service after it was forced to cancel tens of thousands of appointments last month after the Royal College of Nursing (RCN) staged strikes on December 15 and 20 in a bid for better pay and conditions.

The RCN has already pledged to stage further walkouts on January 18 and 19 unless the Government agrees to discuss pay – something it has so far refused to do.

Prime Minister Rishi Sunak has insisted that refusing to negotiate on public sector pay is the ‘right thing’ in the long term.

The planned nurses’ strikes will take place at more NHS employers in England than happened this month, increasing from 44 to 55 trusts, the RCN said.

Meanwhile, ambulance workers joined picket lines on December 21 and will return to striking at five ambulance services in England on January 11 and 23.