Getting stung by a bluebottle is an Australian rite of passage, but conventional wisdom around treatment may have been – up until now – all wrong.

Forget ice packs or vinegar, the most effective way to manage the pain is simple: hot water.

“If you are going to the beach in the summer, take an extra bottle of water and let it heat up in the sun or sand; then you are always ready,” Professor of Clinical Epidemiology at the University of Sydney Angela Webster said. 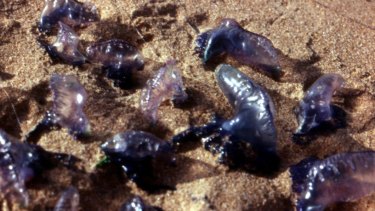 If you are stung by a bluebottle, try to remain as still as possible as movement causes the venom to spread more quickly. Credit:Australian Museum

“The thing I like about this finding is that water is free and you’re also harnessing the energy of the sun; you don’t need thousands of dollars, it’s free,” Professor Webster said.

While using hot water to treat bluebottle stings is nothing new – Professor Webster and colleagues published the finding in 2013 – many people, including lifesavers, are not aware of the correct treatment.

If people are treated incorrectly, it “can have serious consequences, such as cardiac arrest”, said Professor Webster. 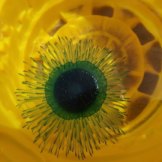 The porpita pacifica, or blue button, is part of ‘the blue tide’ that will arrive on beaches, marking the arrival of bluebottles. Credit:Australian Museum

Australian Museum science communicator Melissa Murray, who is also a lifesaver, said she’s seen several bluebottle stings this year as the warmer weather has drawn people to the water.

To avoid being stung, swimmers should look out for a number of other indicators that herald the stingers' arrival.

As the bluebottles arrive, you’ll be able to spot other organisms along the shoreline, including the blue button (porpita pacifica), the violet sea snail, Velella velella and blue dragon (Glaucus atlanticus).

While these organisms are harmless, they are a good indication of what Ms Murray calls, ‘the blue tide’. 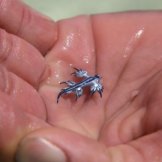 The blue dragon absorbs the venom of bluebottles but is harmless to humans. Credit:Australian Museum

If you can see any of these animals, she suggests it might be best to stay out of the water.

The blue tide “is at the mercy of the currents and winds” and, on the east coast, northeasterly winds will push the bluebottles into the beach.

Ms Murray suggests checking the winds, the high tide mark or with the lifeguards as they will indicate if bluebottles are lurking in the water.

While bluebottle stings are a painful experience, the jellyfish plays an important role in the ocean’s ecosystem.