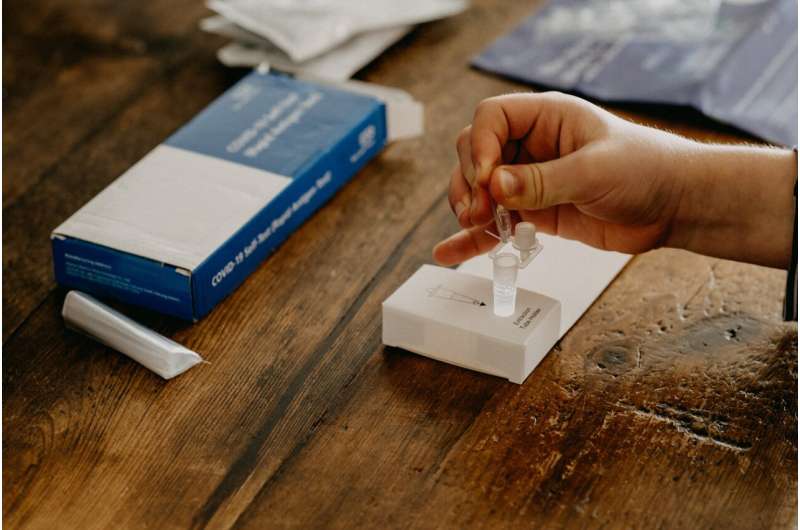 Findings from a new study led by UMass Chan Medical School researchers are the basis for a safety communication issued by the U.S. Food and Drug Administration (FDA) Aug. 11 regarding serial use of at-home antigen tests for COVID-19.

The study results show that at-home antigen tests are more likely to detect COVID-19 within the first week of infection when a person without symptoms tests three times, at 48-hour intervals, and a person with symptoms tests twice, according to the study by UMass Chan researchers and partners supported by the National Institutes of Health (NIH) Rapid Acceleration of Diagnostics (RADx) Tech program. The research appeared in medRxiv, a preprint online platform, and has not yet been peer reviewed.

This study is a culmination of close collaboration with the FDA and NIH. The UMass Chan team has been working for the past year to ensure that the best evidence was generated for performance of rapid antigen tests in asymptomatic people, according to Apurv Soni, MD, Ph.D., assistant professor of medicine and principal investigator on the study.

“To our knowledge, this is one of the largest studies to date that examined COVID-19 rapid antigen test performance serially over two weeks. The results of this study show that rapid tests detect the omicron as well as delta variants and that serial testing with antigen tests remains a useful way to detect infection,” said co-author Nathaniel Hafer, Ph.D., assistant professor of molecular medicine and lead investigator of the RADx Tech Clinical Studies Core Logistics Team.

The study analysis looked at 5,609 eligible people over age 2 across the country, from among 7,361 who were enrolled in the national Test Us At Home study, conducted by the RADx Tech Clinical Studies Core between October 2021 and January 2022. Participants took an at-home antigen test using one of three retail test kits, which are available in the United States, and collected a sample for a molecular PCR test, using nasal swabs for both types of test samples. They tested themselves every 48 hours for 15 days.

During the test period, 154 participants tested positive for SARS-CoV-2 infection based on molecular PCR assays.

Serial testing with an at-home antigen test twice over 48 hours resulted in detection of more than 90% of infections when symptomatic people started testing within the first week of infection, the study reports.

Among those who did not have symptoms but had an infection lasting at least two days based on PCR testing, serial testing three times with an at-home antigen test at 48-hour intervals detected more than 75% of infections, an increase from roughly 60% sensitivity after testing just twice.

An implication of findings from this study is that people who are suspected to be infected with the SARS-CoV-2 virus but have not developed symptoms should exercise caution, such as wearing masks and avoiding crowded places, for at least six days until three at-home antigen tests taken 48 hours apart have been performed, according to the study’s authors.