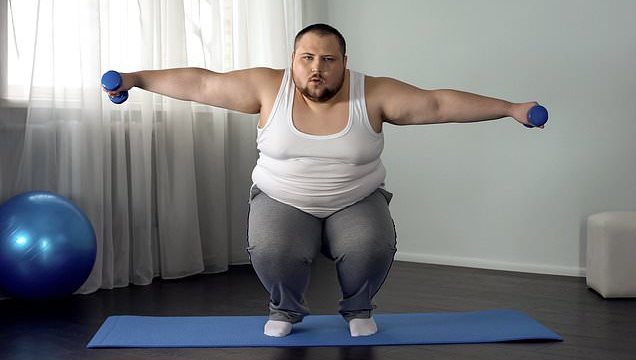 You DO have time for the gym: Exercising for 15 minutes three times a week is just as effective as 45 minute workouts for overweight men

Not having time to go to the gym is no longer an excuse not to exercise, research suggests.

A study of 10 overweight men found those who took part in high intensity interval training (HIIT) for only 15 minutes three times a week saw their insulin sensitivity improve just as much those doing the same work out for 45 minutes.

Insulin sensitivity is a marker of type 2 diabetes, with the results suggesting short bursts of rigorous activity may ward off the disease. 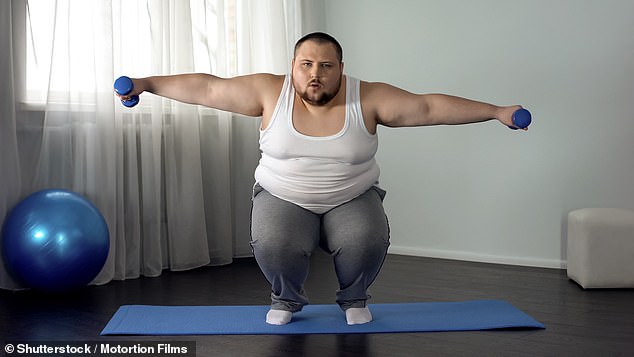 The research was carried out by the University of Edinburgh and led by Dr Stuart Gray, a lecturer in exercise and metabolic health.

Obesity is on the rise, with 26 per cent of adults in the UK being classified with the eating disorder in 2016, compared to just 15 per cent in 1993, NHS Digital statistics show.

And more than two in three adults in the US are overweight or obese, according to the National Institute of Diabetes and Digestive and Kidney Diseases.

Some 3.2million people in the UK have been diagnosed with type 2 diabetes, while the condition affects 30.3million in the US.

In both countries, 90 per cent of patients have type 2, which is strongly associated with carrying too much weight.

To determine the effects of HIIT on insulin sensitivity, the researchers analysed overweight men, some of whom were put on a rigorous 15 minute exercise routine.

WHAT IS TYPE 2 DIABETES?

Type 2 diabetes is a condition which causes a person’s blood sugar to get too high.

More than 4million people in the UK are thought to have some form of diabetes.

Type 2 diabetes is associated with being overweight and you may be more likely to get it if it’s in the family.

The condition means the body does not react properly to insulin – the hormone which controls absorption of sugar into the blood – and cannot properly regulate sugar glucose levels in the blood.

Excess fat in the liver increases the risk of developing type 2 diabetes as the buildup makes it harder to control glucose levels, and also makes the body more resistant to insulin.

Weight loss is the key to reducing liver fat and getting symptoms under control.

It can lead to more serious problems with nerves, vision and the heart.

Each training session involved a set of nine resistance exercises – such as leg presses and bicep curls.

The men repeated these exercises – within the 15 minutes – until they felt unable to do anymore.

After six weeks, results – published in the journal Experimental Physiology – suggested a 15 minute workout is just as effective as exercising for three quarters of an hour.

Men in both groups saw a 16 per cent improvement to their insulin sensitivity.

This measures how a person responds to the hormone insulin, which is responsible for the uptake of glucose from our blood to be used as energy or stored in tissues.

Untreated, this raises a person’s risk of heart disease and stroke.

All of the participants also saw their muscles become stronger and bigger after just two weeks.

But the study was lacking a control group and only included healthy – albeit overweight – men.

Additional trials made up of men of a range of sizes and health statuses should therefore be carried out, the researchers said.

‘On top of these results, we know that the gym is not for everyone,’ Dr Gray said.

‘Therefore, we also need to see if we can get people doing similar exercises at home without gym equipment, to achieve similarly beneficial effects.’

If these trials are positive, the scientists hope further studies will demonstrate the effectiveness of HIIT in improving type 2 diabetes.