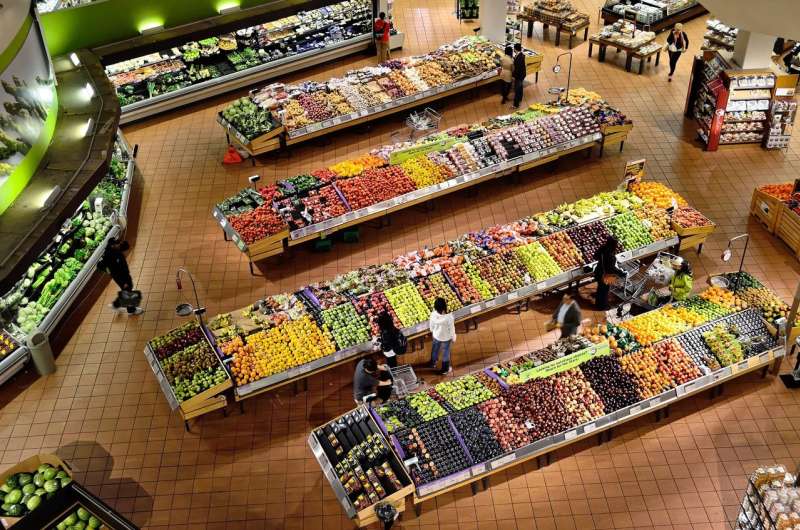 Imagine you’re walking through a chain supermarket, headed for the dairy section.

You’ve done it a million times: Take a right at the entrance, away from the produce, and walk past two-dozen aisles of canned soups, boxed macaroni and other staples. The rows of industrial refrigerators should be right … about … here.

And then you remember: You’re at the supermarket across town, not the one in your neighborhood. Everything else looks the same, but the dairy section’s location is flipped, and you’re at the wrong end of the store.

Researchers have long struggled to learn how the brain remembers spatial environments, especially those that are similar—such as two stores from the same supermarket chain—and how the brain avoids confusion, or doesn’t.

A new study by University of Arizona psychologists suggests that the brain may treat similar environments as if they are even more different than a pair of environments that have nothing in common. The concept is known to brain scientists as “repulsion.”

“Until our study, we didn’t know how the brain might be able to differentiate those things,” said senior study author Arne Ekstrom, a professor of psychology in the College of Science who leads UArizona’s Human Spatial Cognition Laboratory.

Li Zheng, a postdoctoral fellow in Ekstrom’s lab, led the study, which was published in the journal Nature Communications.

The findings could eventually help scientists better understand why conditions such as stroke and Alzheimer’s disease cause symptoms such as disorientation and poor spatial memory.

“The implications here would be maybe this neural repulsion mechanism is something that could be impaired with aging,” Ekstrom said. “If you understand the mechanisms whereby healthy, young brains work, maybe you can better understand some of the things that go wrong with neural disease and aging.”

The study’s 27 participants watched an animated video from the perspective of someone walking around three virtual cities. The cities looked nearly identical: Each included a circular green field with one store in the center, and six other stores were spaced out around the edge of the city.

The videos took participants on a virtual walk from the store in the center to each of the other stores in each city. The participants were then asked to memorize where each store was in each city, where the stores were in relation to one another, and how long it took to walk between certain stores. They were able to review the videos until they felt they had memorized the three cities’ layouts.

Participants were then asked questions about the cities’ layouts, such as which stores were in which cities and how far apart the stores were from one another. This task proved challenging, Zheng and Ekstrom said, considering how similar the cities were.

Those who scored at least 80% on their test watched the videos and answered the questions again, but this time while inside an MRI scanner at the UArizona’s BIO5 Institute, which took images of participants’ brains, allowing researchers to track brain activity during the tasks.

The patterns of brain activity the researchers observed were often very similar to one another, Zheng and Ekstrom said, since the cities themselves were very similar.

But when participants were asked about stores that appeared in more than one city, their brain activity was surprisingly different—indicating that participants’ brains were treating the same stores shared between the cities as if they were even more different than two stores that were, in fact, completely different.

Zheng and Ekstrom’s findings suggest that this is how our brains walk a fine line between learning new information while not using limited brain power to relearn similar processes or experiences that occur every day.

As an example, Ekstrom points to a visit to a restaurant. There are many aspects about dining out that will always be the same—being seated, ordering food and waiting for the meal. But dinner with a romantic partner would come with key differences than, say, a dinner with a co-worker.

“That’s the challenge for the brain: A lot of stuff in our daily life is similar, so there’s no reason to use our limited resources to relearn very similar experiences,” Ekstrom said. “But at the same time, there are things in our everyday life that we have to treat as different in order to be able to learn.”

The study also strengthens support for a theory about where the brain stores information on the similarities between two environments. The study shows that this information may be kept in the prefrontal cortex—a section near the front of the brain that manages complex functions such as planning and decision making.

Another theory has held that this information is stored in the hippocampus, the part of the brain that plays an important role in memory and navigating spaces. Humans have two hippocampi, each measuring about a centimeter long, located on either side of the brain near the ears.

Zheng and Ekstom plan to apply their findings to more questions about neural diseases such as stroke and Alzheimer’s.

The work builds on methods Zheng used in neuroscience research in China before joining Ekstrom’s lab in 2019 to study spatial cognition.