A poor diet is one of the main risk factors in cardiovascular disease, the number one killer in Australia and around the world.

But one limitation of research into the relationship between what we eat and cardiovascular disease is that links have usually been made based on what a person eats in one day. 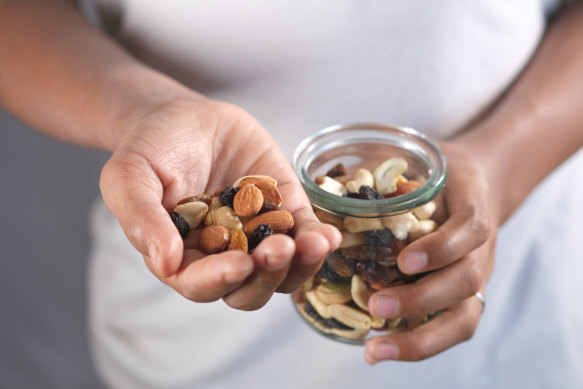 Nuts were among the food groups related to a lower risk of dying from cardiovascular disease.Credit:Getty

When researchers typically collect the data, for instance, they ask participants: “What do you eat yesterday?” It’s not a great representation of our overall diet habits, says Dr Luna Xu, a researcher at the University of New South Wales.

So, for a new study, published in the journal Advances in Nutrition, Xu and her team wanted to explore people’s long-term eating habits (over a minimum of five years) and how those affected the risk of cardiovascular disease.

They looked at the diets of 70,273 people who had died from cardiovascular disease and compared them with a similar number of people who were healthy. Specifically, they analysed their consumption of 10 food groups: whole grains, vegetables, fruits, nuts, legumes, eggs, poultry, dairy products, fish/seafood, red/processed meat.

As each of the 22 studies included in the systematic review had different ways of measuring food quantities consumed, Xu says she can’t provide specifics about what a “high” intake is exactly, only that the outcomes were based on a comparison between people who consumed the least of each food group and people who consumed the most.

They didn’t find any studies looking at the links between fish and seafood consumption with cardiovascular disease, but there were interesting findings when it came to dairy and legumes.

“There are a lot of debates about diet,” says Xu. “For example, some people say dairy is good for [reducing risk of] heart disease, but some people’s say it’s not healthy.”

In this study, it made no difference whether people ate a lot of dairy or not. Perhaps more surprisingly, they found high or low intake of legumes seemed to make no difference to heart health either.

Senior dietitian at the Heart Foundation, Jemma O’Hanlon says the findings of this study align with the evidence that has been used to develop their Heart Healthy Eating Patterns.

“We note the dose-response analysis was able to be undertaken for food groups such as red/processed meat, whole grains, legumes, and dairy products and that even small changes in an eating pattern can result in improved cardiovascular outcomes,” adds O’Hanlon, who was not involved with the research.

“We continue to encourage Australians to protect their hearts by increasing, for the long term, their intake of whole grains, vegetables, fruits, nuts and to lower their intake of red or processed meats where possible.”

Obvious as this advice may be, it’s an important reminder says Xu:

“People are not really eating one type of food per day,” she says, referring to research that looks at just one type of food. “People are eating different types of food and how these foods interact relates to the health outcomes.”

“Stick with those healthy food choices and if you do that as a daily routine, you get the maximum benefit health benefits.”