Doctors do not appear to be bouncing back from the pandemic’s early days — their happiness at and away from work continues to be significantly lower than before the pandemic. Physicians reported similar levels of unhappiness last year too.

Nearly half of physicians said they were somewhat or very unhappy at work, compared with 75% before the pandemic, the new Medscape Physician Lifestyle & Happiness Report 2023 shows. 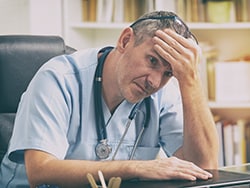 “I speak to physicians around the country and I hear that their workplaces are understaffed, they’re overworked and they don’t feel safe. Although we’re in a different phase of the pandemic, doctors feel that the ground beneath them is still shaky,” said Sánchez Wohlever, the author of Recapturing Joy in Medicine.

Most doctors are seeing more patients than they can handle and are expected to do that consistently. “When you no longer have the capacity to give of yourself, that becomes a nearly impossible task,” said Sánchez Wohlever.

Also, physicians in understaffed workplaces often must take on additional work such as administrative or nursing duties, said Katie Cole, DO, a board-certified psychiatrist and a physician coach.

While health systems are aware that physicians need time to rest and recharge, staffing shortages prevent doctors from taking time off because they can’t find coverage, said Cole.

“While we know that it’s important for physicians to take vacations, more than one third of doctors still take 2 weeks or less of vacation annually,” said Cole.

Physicians also tend to have less compassion for themselves and sacrifice self-care compared to other healthcare workers, she said. “When a patient dies, nurses get together, debrief, and hug each other, whereas doctors have another patient to see. The culture of medicine doesn’t support self-compassion for physicians,” said Cole.

Physicians also felt less safe at work during the pandemic due to shortages of personal protective equipment, said Sánchez Wohlever. They have also witnessed or experienced an increase in abusive behavior, violence and threats of violence, she said.

Doctors maintain their mental health primarily by spending time with family members and friends, according to last year’s Medscape’s Physician Lifestyle & Happiness Report. Yet half of doctors reported in a survey by the Physicians Foundation that they withdrew from family, friends or co-workers last year, said Sánchez Wohlever.

“When you exceed your mental, emotional, and physical capacity at work, you have no reserve left for your personal life,” said Cole.

That may explain why only 58% of doctors reported feeling somewhat or very happy outside of work, compared with 84% who felt that way before the pandemic.

More women doctors said they deal with stronger feelings of conflict in trying to balance parenting responsibilities with a highly demanding job. Nearly 1 in 2 female physician-parents reported feeling very conflicted at work, compared to about 1 in 4 male physician-parents.

When physicians go home, they may be emotionally drained and tired mentally from making a lot of decisions at work, said Cole.

“As a woman, if you have children and a husband and you’re responsible for dinner, picking up the kids at daycare or helping them with homework, and making all these decisions when you get home, it’s overwhelming,” said Cole.

Doctors need to prioritize their own well-being, said Sánchez Wohlever. “That’s not being selfish, that’s doing what’s necessary to stay well and be able to take care of patients. If doctors don’t take care of themselves, no one else will.”

Sánchez Wohlever recommends that doctors regularly interact with relatives, friends, trusted colleagues, or clergy to help maintain their well-being, rather than waiting until a crisis to reach out.

A good coach, mentor or counselor can help physicians gain enough self-awareness to handle their emotions and gain more clarity about what changes need to be made, she said.

Cole suggests that doctors figure out what makes them happy and fulfilled at work and try to spend more time on that activity. “Knowing what makes you happy and your strengths are foundational for creating a life you love.”

She urges doctors to “start thinking now about what you love about medicine and what is going right at home, and what areas you want to change. Then, start advocating for your needs.”

Christine Lehmann, MA, is a senior editor and writer for Medscape Business of Medicine based in the Washington, DC area. She has been published in WebMD News, Psychiatric News, and The Washington Post. Contact Christine at [email protected] or via Twitter @writing_health