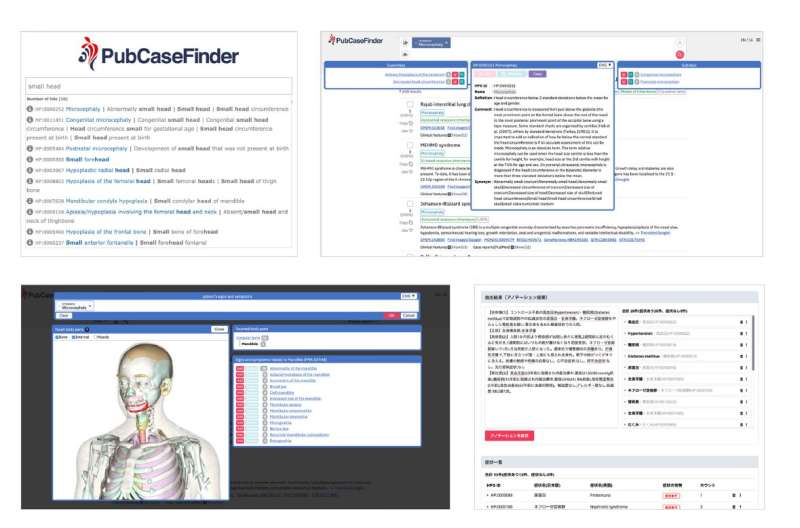 Scientists have identified over 10,000 rare diseases with the majority of these diseases being genetic in origin. The vast majority of patients with these diseases experience long and grueling diagnostic odysseys and their early treatment is hindered. In 2017, a team of researchers released PubCaseFinder, a web-based clinical decision support system that guides clinicians in diagnosing these rare/genetic diseases. Now those researchers have updated PubCaseFinder, improving its reliability and making it even more useful to medical professionals working to diagnose rare/genetic diseases.

The research team published their improvements in Human Mutation on May 20, 2022.

Even trained experts can spend hours looking for trusted medical sources (e.g., textbooks, literature, and databases) for candidate diseases to determine which diseases show phenotypic overlap with undiagnosed patients’ phenotypes. Phenotype refers to a patient’s symptoms and signs. While massively parallel sequencing technology, called next-generation sequencing, can be used to identify the candidate genes causing the disease and is able to reach a diagnosis in 50 percent of the undiagnosed patients, it is time-consuming to identify a single gene that explains an undiagnosed patients’ phenotypes.

To tackle these problems, the researchers developed a clinical decision support system called PubCaseFinder in 2017, that provides ranked lists of 7848 genetic diseases, 3619 rare diseases, and 4025 causative genes based on phenotypic similarities. Top-listed diseases and causative genes represent the most likely differential diagnosis because their phenotypes overlap well with the query phenotypes as input. PubCaseFinder uses a match-making algorithm called GeneYenta to calculate phenotypic similarities.

In their current work, the researchers have brought some significant improvements to PubCaseFinder and the application programming interface. The updated PubCaseFinder facilitates phenotyping to provide a more precise record of the patient’s phenotype abnormalities and allows medical professionals to filter ranked lists using causative genes, modes of inheritance, and disease names. The previous GeneYenta matching algorithm that was not robust when users incorrectly specified a patient’s phenotype, has been updated. PubCaseFinder’s automated differential diagnosis performance has been improved by the updated GeneYenta matching algorithm. The researchers have also equipped PubCaseFinder with an automatic update system to maintain updated resources. These latest improvements in PubCaseFinder, the GeneYenta matching algorithm, and the application programming interface will make these resources more available to case repositories and medical professionals. “We believe that these updates will contribute to improving rare/genetic disease diagnostic rates,” said Toyofumi Fujiwara, a researcher at the Research Organization of Information and Systems in Tokyo, Japan.