Dementia is a syndrome (a group of related symptoms) associated with an ongoing decline of brain functioning. Its impact on a person’s cognitive function tends to cause symptoms such as memory loss and confusion. While dementia cannot cannot be prevented, research suggests making certain certain lifestyle choices can reduce a person’s risk and delay the onset. It is well understood that exercise plays a key role in keeping a person’s mind sharp, but what is the best type?

According to a Mayo Clinic study published in Mayo Clinic Proceedings, any exercise that gets the heart pumping may reduce the risk of dementia and slow the condition’s progression once it starts.

Researchers examined the role of aerobic exercise in preserving cognitive abilities and concluded that it should not be overlooked as an important therapy against dementia.

The researchers broadly defined exercise as any aerobic activity that raises the heart rate and increase the body’s need for oxygen.

“We culled through all the scientific literature we could find on the subject of exercise and cognition, including animal studies and observational studies, reviewing over 1,600 papers, with 130 bearing directly on this issue. We attempted to put together a balanced view of the subject,” says J. Eric Ahlskog, M.D., Ph.D., a neurologist at Mayo Clinic.

Adding: “We concluded that you can make a very compelling argument for exercise as a disease-modifying strategy to prevent dementia and mild cognitive impairment, and for favourably modifying these processes once they have developed.” 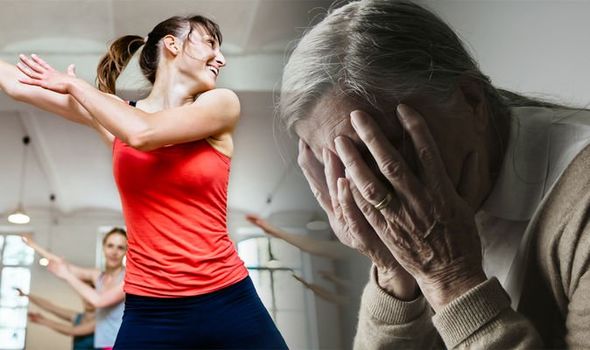 Bolstering those findings, another study suggested a half hour of aerobic exercise four to five times a week may prevent or slow cognitive decline in older adults who are at a high risk of developing Alzheimer’s – the most common form of dementia in the UK.

“This is the first randomised and controlled trial … to assess effects of exercise on brain structure, function and amyloid burden in older adults who have memory problems, thus, high risks of Alzheimer’s disease,” said lead author Rong Zhang, a neurology professor at UT Southwestern Medical Center.

The study followed people aged 55 and older with mild cognitive impairment. Subjects were randomised to 12 months of aerobic exercise or stretching and toning.

Both aerobic and stretching may prevent or slow cognitive decline, according to the researchers, but aerobic exercise had more benefits on reducing hippocampus shrinkage than stretching.

The hippocampus plays an essential role in forming new memories and is also associated with learning and emotions.

“The key positive finding is that the exercise intervention specifically reduced shrinkage of the memory centre in the brain in people with the earliest symptomatic stage of Alzheimer’s disease,” said neurologist Dr. Richard Isaacson, who founded the Alzheimer’s Prevention Clinic at Weill Cornell Medicine.

He added: “Most physicians believe in the power of exercise to support overall brain health, but fewer believe that exercise can specifically impact people with early Alzheimer’s.

This study brings us one step closer toward teasing out the effects in people with biomarker defined Alzheimer’s.”

There is some evidence that following a Mediterranean diet may also reduce the risk of dementia, according to Alzheimer’s Society.

Mediterranean diets are traditionally high in fruits, vegetables, legumes and cereals, with moderate consumption of oily fish and dairy, and low in meat, sugar and saturated fat.

Most fat in this type of diet comes from olive oil, and alcohol is consumed in moderation with meals.

While the evidence is far from certain, as the charity explained, “For most people, following the Mediterranean diet is a good way to ensure a healthy diet, which may be important for maintaining good brain function.”