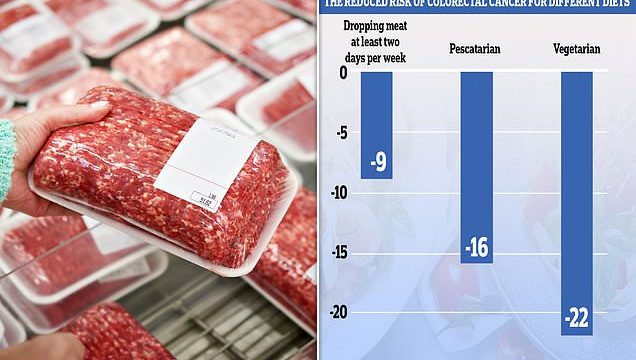 Chances are, you’ve already heard of ‘meat-free Monday’. But now you may want to consider complimenting it with ‘tofu Tuesday’.

Cutting out steaks, bacon and sausages for two days each week is enough to slash your odds of getting cancer, a study suggests.

The study, which tracked 470,000 Britons for more than a decade, discovered the risk was even smaller for pescatarians, vegetarians and vegans.

Meat — especially red and processed meat — can increase the risk of bowel cancer because chemicals formed while cooking can damage cells in the body.

Other chemicals in the meat itself — including nitrates — and its natural red pigment can also be carcinogenic.

Around 43,000 people in the UK are diagnosed every year with the disease, which is also known as colorectal cancer. It is Britain’s second biggest cancer killer, claiming the lives of around 16,000 people annually.

It is the third leading cancer killer in the US, with more than 50,000 people expected to die with the disease this year in the country.

The NHS recommends people eat no more than 70g of red or processed meat a day — the equivalent of half a burger or two slices of bacon. 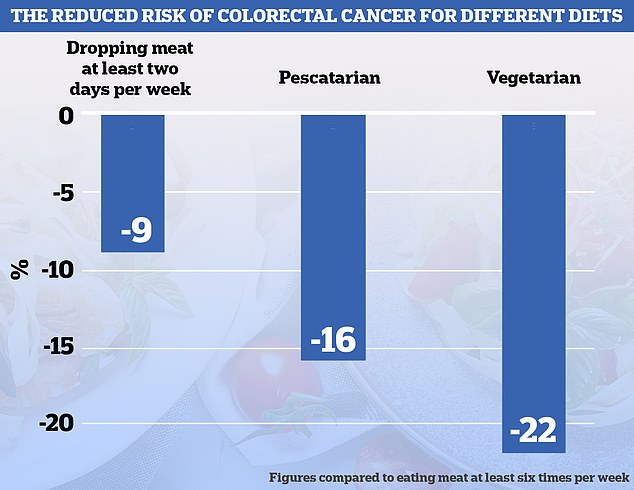 Researchers at the University of Oxford found limiting meat to five or less days per week can reduce the risk of bowel cancer by nine per cent. The study of more than 470,000 Brits over 15 years found switching to just eating fish or cutting out meat altogether see the risk drop even further 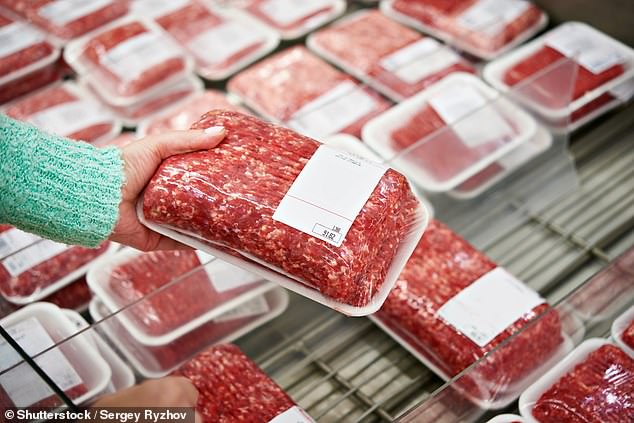 Switching to a healthier diet could add more than a decade to your life, research suggests.

The research in Norway looked at the typical Western diet which the average British person is likely to eat every day.

It contains hardly any nuts or legumes, too few fruits and vegetables, half a litre of sugary drinks and 50 per cent too much dairy.

A 20-year-old Brit or American who keeps to the researchers’ optimum diet could live an extra 13 years compared someone who does not, the study calculated.

But even making dietary changes later in life could still significantly increase your lifespan, even in your 80s.

Legumes, whole grains and nuts lower cholesterol and are packed with vitamins and minerals.

A plethora of studies have linked diet to life expectancy, mainly through obesity, with the condition linked to cardiovascular disease, diabetes, and various cancers.

About a quarter of adults in the UK, and nearly half of those in the US are classified as obese.

The study, published in BMC Medicine, analysed the diets of 472,377 adults aged 40 to 70 across England, Wales and Scotland.

Participants were cancer-free from 2006 to 2010, when the study began.

More than half (52 per cent) were regular meat-eaters — defined as having it at least six times per week.

Forty-four per cent fell in the ‘low’ group, which the researchers classified as having meat five or less times per week.

Just 2.3 per cent were pescatarian — people who eat fish but no meat — and 1.8 per cent stuck to vegetarian or vegan diets.

Researchers then tracked the volunteers’ NHS records to spot cancer diagnoses, in the hope of spotting a trend.

They monitored whether participants were diagnosed with bowel cancer, prostate cancer or breast cancer.

Overall, 55,000 developed some form of cancer over the 11-year period.

Nearly 11.7 people eating meat five times per week went on to develop some form of cancer, compared to 11.9 per cent of the near-daily group.

For comparison, only 8.8 per cent of pescatarians and 7.7 per cent of vegetarians were diagnosed with the disease.

But the difference between the two meat-eating groups was starker when looking specifically at bowel cancer.

After adjusting for patients’ gender and age, the scientists calculated the chances of getting bowel cancer were nine per cent lower in the lower meat-eating group than those eating it almost daily.

There was no risk difference between high and low meat eating for prostate cancer — but it did appear to have a slight impact on breast cancer.

The risks were lower for pescatarians, vegetarians and vegans for all three cancers.

Writing in the study, the team led by Cody Watling, a cancer epidemiology doctoral student at the university, said the heightened risk of bowel cancer was unlikely to be caused purely by higher obesity in the meat group, who tended to have higher BMIs.

But they admitted they could not prove what was causing the association between more meat and a higher risk of bowel cancer.

‘This is likely to at least in part explain the lower risk of colorectal cancer in low meat-eaters, and mechanisms suggested include chemicals in meat such as nitrosamines.’

Independent experts said the study failed to take into account how much meat was eaten by volunteers on each day.

Dr Duane Mellor, a dietitian at Aston University in Birmingham, said that although the research ‘was not able to assess if participants were eating more or less than the recommended amount of meat according to healthy eating guidelines’.

He added: ‘Perhaps more importantly it did not consider what people in the study ate with their meat.

‘Previous studies have looked at the interaction between meat intake and fibre, which suggest higher fibre intake may reduce the risk of particularly colon cancer from eating meat.

‘This could be as the fibre reduces the risk of potentially cancer causing chemicals in the meat coming into contact with the lining of our bowel.

‘A problem with this study (as with many looking at the association of one type of food with cancer) is that it fails to look at the whole diet – it can be as important to look at what is eaten as well as what is not.’

THE SYMPTOMS OF BOWEL CANCER, WHICH DEVELOPS FROM POLYPS IN THE COLON AND RECTUM

Bowel, or colorectal, cancer affects the large bowel, which is made up of the colon and rectum.

Most cases have no clear cause, however, people are more at risk if they:

More than nine out of 10 people with stage one bowel cancer survive five years or more after their diagnosis.

This drops significantly if it is diagnosed in later stages.

According to Bowel Cancer UK figures, more than 41,200 people are diagnosed with bowel cancer every year in the UK.

It affects around 40 per 100,000 adults per year in the US, according to the National Cancer Institute.