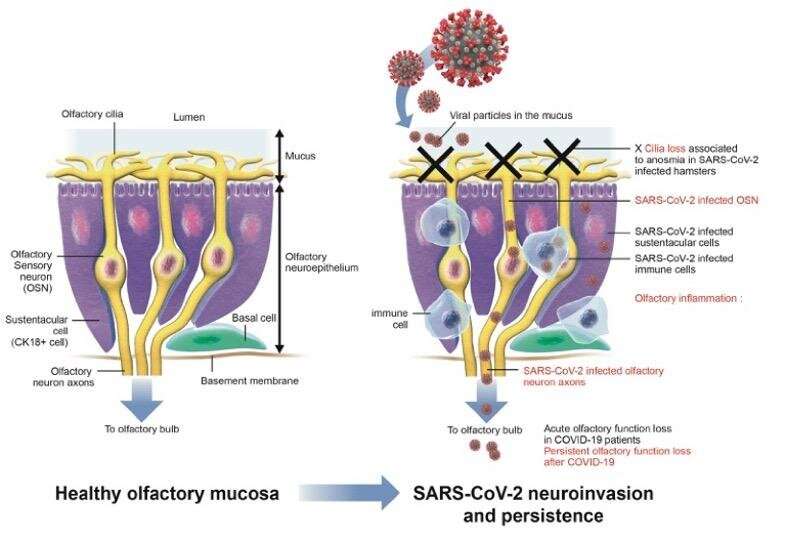 Loss of smell, or anosmia, is one of the earliest and most commonly reported symptoms of COVID-19. But the mechanisms involved had yet to be clarified. Scientists from the Institut Pasteur, the CNRS, Inserm, Université de Paris and the Paris Public Hospital Network (AP-HP) determined the mechanisms involved in the loss of smell in patients infected with SARS-CoV-2 at different stages of the disease. They discovered that SARS-CoV-2 infects sensory neurons and causes persistent epithelial and olfactory nervous system inflammation. Furthermore, in some patients with persistent clinical signs, anosmia is associated with prolonged epithelial and olfactory nervous system inflammation and lasting presence of the virus in the olfactory epithelium. These findings were published in the journal Science Translational Medicine on May 3, 2021.

Although COVID-19 caused by the SARS-CoV-2 virus is principally a respiratory disease, many patients present with non-respiratory symptoms. These include a sudden loss of smell in individuals infected with SARS-CoV-2, which has been reported throughout the world since the beginning of the pandemic. Until recently, there has been uncertainty as to whether the virus plays a direct role in anosmia. According to one hypothesis generally accepted until now, it was assumed that a transient edema of the olfactory clefts inhibited airflow transporting odor molecules to the olfactory neurons (the familiar sensation of a blocked nose experienced during a common cold).

In a recent study, scientists from the Institut Pasteur, the CNRS, Inserm, Université de Paris, and the Paris Public Hospital Network (AP-HP) shed light on the mechanisms involved in COVID-19-related anosmia. The study was conducted with COVID-19 patients and supplemented with tests on an animal model. This study unexpectedly demonstrates that nasopharyngeal swabs may test negative by standard RT-qPCR even if the virus is still present at the back of the nasal cavities, in the olfactory epithelium. In light of this discovery, SARS-CoV-2 diagnosis by nasal brushing may be envisaged in addition to nasopharyngeal swabbing for the PCR test in patients experiencing loss of smell.

This work also sheds light on the mechanism of COVID-19-related smell loss by revealing a series of chronological steps:

This study demonstrates that loss of smell is also caused by deterioration of the sensory organ at the back of the nasal cavities. “We observed that SARS-CoV-2 infects not only the sensory neurons, but also the olfactory nerve and the olfactory nerve centers in the brain,” comments Pierre-Marie Lledo, CNRS scientist, head of the Perception and Memory Unit (Institut Pasteur/CNRS), and co-author of the study.

“Another key finding from this study emerged from an observation of animal models, which revealed that once the virus enters the olfactory bulb, it spreads to other nerve structures, where it induces a major inflammatory response,” explains Hervé Bourhy, head of the Lyssavirus Epidemiology and Neuropathology Unit at the Institut Pasteur and co-author of the study. Infection of the olfactory neurons may therefore provide a gateway to the brain and explain why some patients develop various psychological clinical signs (anxiety disorders, depression) or those of a neurological nature (cognitive decline, susceptibility to developing a neurodegenerative disease), for which further studies are necessary.

Marc Lecuit, head of the Biology of Infection Unit (Institut Pasteur, Inserm, Université de Paris, AP-HP) and co-author of the study concludes: “According to our results, loss of smell in COVID-19 may persists for several months in some patients and this persistence of clinical signs may be attributed to the persistence of the virus and inflammation in the olfactory mucosa.” These observations should be used to adapt the diagnosis and management of long-term COVID-19 signs.

In summary, this study has led to the following 4 key findings: