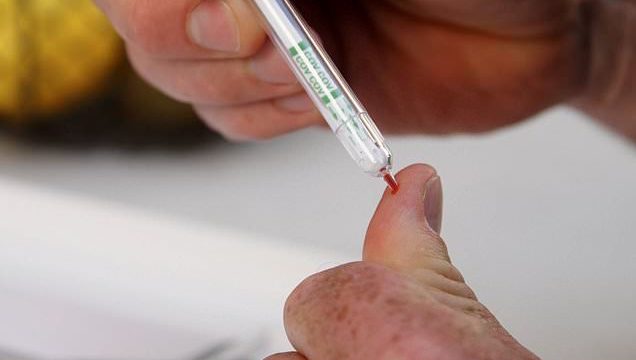 A blood test could detect signs of Alzheimer’s disease years before symptoms appear.

Most patients receive a diagnosis for Alzheimer’s only after they develop memory problems, but an early sign of the disease comes from clumps of a protein called amyloid beta which build up in the brain.

A blood test which detects these toxic clumps was able to identify all but one of 147 people with Alzheimer’s disease in a new study.

The test also identified people who would go on to develop cognitive impairment up to a decade before diagnosis.

News of the new blood test comes on the heels of a separate study that suggested Alzheimer’s could in the future be diagnosed simply through a urine test.

The blood test, called soluble oligomer binding assay (SOBA), needs to be trialed on far more people, and is still at an early stage.

But Valerie Daggett, professor of bioengineering at the University of Washington, who developed the test, said: ‘What clinicians and researchers have wanted is a reliable diagnostic test for Alzheimer’s disease.

‘And not just an assay that confirms a diagnosis of Alzheimer’s, but one that can also detect signs of the disease before cognitive impairment happens. What we show here is that SOBA may be the basis of such a test.

A game-changing new Alzheimer’s drug may mark the ‘beginning of the end’ in the decades-long search for an effective treatment, leading experts say.

The new test focuses on amyloid beta – the proteins which are a red flag for Alzheimer’s disease.

When people develop Alzheimer’s, amyloid beta proteins in the brain fold wrongly, forming ‘alpha sheets’ which stick to each other in clumps.

The test uses synthetic alpha sheets to draw out the amyloid beta from someone’s blood and show how much is in their body.

The test was 99 per cent accurate in correctly identifying each sample’s diagnosis.

The test, trialled on 379 samples from 310 people in total, at first appeared to be wrong in providing a positive result for 11 seemingly healthy people.

But 10 of these people, for whom follow-up records were available, went on to be diagnosed with cognitive impairment and Alzheimer’s disease.

In one case of an older person with mild cognitive impairment, the test was positive 10 years before they were diagnosed.

The research paper on the test, published in the journal Proceedings of the National Academy of Sciences, also gives examples of a 74-year-old woman who tested positive more than five years before being diagnosed with Alzheimer’s disease after her death.

An 82-year-old man had a positive test result four years before being diagnosed with mild cognitive impairment.

Blood tests are the major hope for one day screening people for early signs of dementia, as is currently done for early cancer.

CT and PET scans of the brain are expensive and expose people to radiation, while spinal taps to look for clues in spinal fluid are uncomfortable and invasive.

However, while urine and blood tests are quicker and more straightforward, more research is needed on how well they work.

In the study, the team also showed that SOBA could easily be modified to detect toxic clumps of another type of protein associated with Parkinson’s disease.

‘We are finding that many human diseases are associated with the accumulation of toxic oligomers that form these alpha sheet structures,’ said Dr Daggett.

‘Not just Alzheimer’s, but also Parkinson’s, type 2 diabetes and more. SOBA is picking up that unique alpha sheet structure, so we hope that this method can help in diagnosing and studying many other “protein misfolding” diseases.’

WHAT IS DEMENTIA? THE KILLER DISEASE THAT ROBS SUFFERERS OF THEIR MEMORIES

Dementia is an umbrella term used to describe a range of progressive neurological disorders (those affecting the brain) which impact memory, thinking and behaviour.

There are many different types of dementia, of which Alzheimer’s disease is the most common.

Some people may have a combination of types of dementia.

Regardless of which type is diagnosed, each person will experience their dementia in their own unique way.

Dementia is a global concern but it is most often seen in wealthier countries, where people are likely to live into very old age.

HOW MANY PEOPLE ARE AFFECTED?

The Alzheimer’s Society reports there are more than 900,000 people living with dementia in the UK today. This is projected to rise to 1.6million by 2040.

Alzheimer’s disease is the most common type of dementia, affecting between 50 and 75 per cent of those diagnosed.

In the US, it’s estimated there are 5.5 million Alzheimer’s sufferers. A similar percentage rise is expected in the coming years.

As a person’s age increases, so does the risk of them developing dementia.

Rates of diagnosis are improving but many people with dementia are thought to still be undiagnosed.

IS THERE A CURE?

Currently there is no cure for dementia.

But new drugs can slow down its progression and the earlier it is spotted the more effective treatments are.