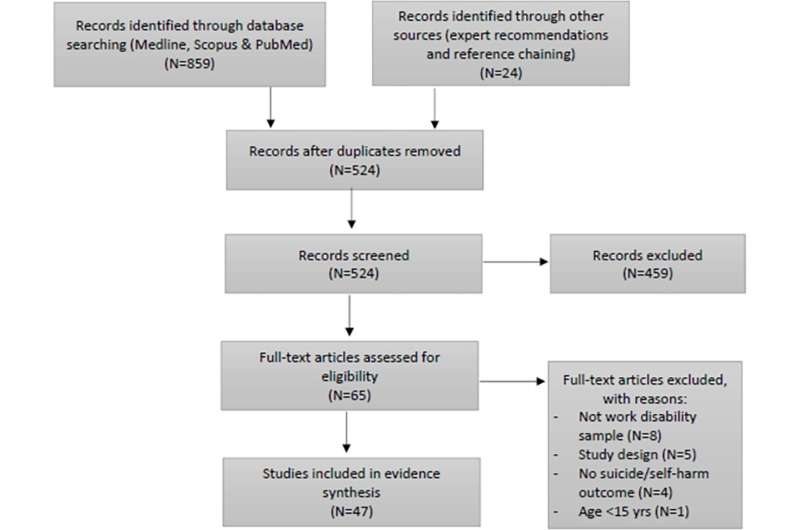 People who are off work due to injury or illness are at higher risk of later suicide and intentional self-harm, a new international study by Monash University School of Public Health and Preventive Medicine researchers has found.

They collated findings from 47 studies published over 20 years from 16 different countries, to closely examine the relationship between a disabling work injury or illness, and later suicide or self-harm.

Published in PLOS Global Public Health, the review found that the risk of suicide was elevated in people with workers’ compensation claims, on long-term sick leave and receiving disability pensions.

Lead researcher Professor Alex Collie said this suggested a need for governments and employers to focus on identifying workers at greatest risk of suicide, and put more effort into suicide prevention.

“We found consistent evidence of a link between being off work sick or injured and later suicide,” Professor Collie said. “We see this link in many countries and in people with different types of health conditions.”

Of the 47 studies included in the review, 44 found that people with work injury or illness were at greater risk of suicide or self-harm. Only one study showed a protective relationship and two showed no relationship.

“Looking across all of this evidence, we also found a number of things that increase the risk of suicide, such as being off work for a long time, younger age, living alone, having a history of poor health or a mental health condition,” Professor Collie said.

People who had very long periods off work were at much higher risk. Being out of work with injury or illness for weeks, months or years was linked with a significantly increased risk of suicide and self-harm.

“But time away from work doesn’t necessarily reflect the severity of injury or illness,” Professor Collie said. “It may also indicate that the person has received poor quality medical treatment, has delayed seeking help, or has other behaviors that can affect recovery such as substance misuse.”

The review’s authors suggest that programs and services designed to reduce the duration of time off work may also reduce the risk of suicide and self-harm.

“When it comes to reducing time off work, we know what good interventions look like,” Professor Collie said. “This review adds another dimension, and suggests by supporting sick and injured workers to return to work, we may also be able to reduce the risk of suicide.”

“Suicide prevention should not be left just to the health care system. We have opportunities through systems that support sick and injured workers, like workers’ compensation and social security, to identify people who are at higher risk and to provide supports and services that reduce those risks.”

The researchers also identified some large gaps in the research literature. Only two Australian studies were identified, and there were no studies of suicide prevention interventions.