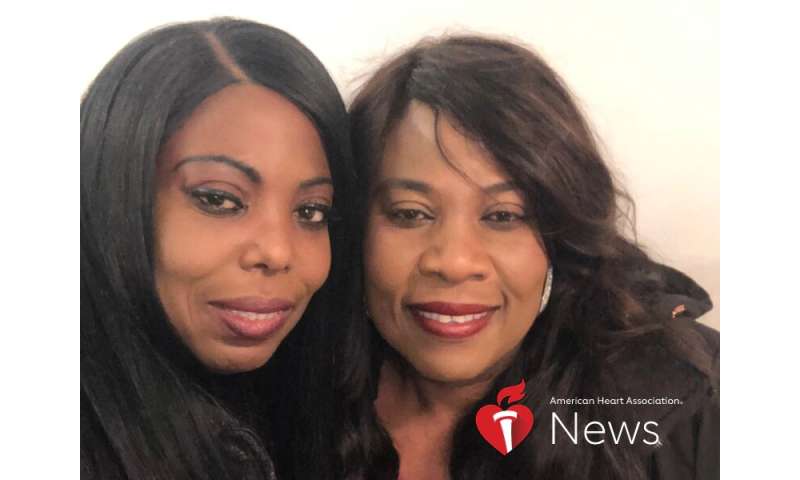 Hyvelle Ferguson-Davis was reviewing paperwork at her office in Fort Lauderdale, Florida, when the headache started. It grew stronger and stronger and her eyes blurred, making it difficult to read. She hoped she wasn’t coming down with something.

After work, Ferguson-Davis, then 41, drove home with a still-pounding headache. She was too busy to get sick, she told herself. Most immediately, she needed to get dinner on the table.

When her teenage daughter came into the kitchen and asked a question, Ferguson-Davis gave garbled answers.

The teen called her aunt, who urged the girl to call 911.

When the paramedics arrived, they wanted to take Ferguson-Davis to the hospital because her blood pressure was extremely high.

Later that evening, her husband noticed her left foot was dragging.

“We’re going to the hospital,” he told her.

Doctors said she had a slow bleed in her brain. She spent three weeks in stroke rehabilitation, relearning to speak, walk and perform tasks such as buttoning a shirt. She arrived in a wheelchair and left with a walker.

Doctors linked her stroke to Type 2 diabetes, which she had been diagnosed with when she was 35 and pregnant with her son.

At that time, she initially followed doctor’s orders, changing her diet and self-administering daily insulin injections. But after her son was born, she slowly reverted to her old habits.

“I was eating whatever I wanted,” she said. “I gained a lot of weight. I thought my meds would take care of it.”

Ferguson-Davis’ general practitioner told her she was in danger of having a stroke. But she shrugged it off, telling herself she was young and “a stroke is an old person thing to have.”

Diabetes also increases the risk of heart disease. Only a few weeks after returning home from stroke rehab, Ferguson-Davis felt severe back pain—”like a lightning bolt”—in the middle of the night.

Her husband rushed her to the hospital, where doctors told her she’d had a heart attack and needed surgery to unblock her arteries. Within a couple hours, she underwent quadruple bypass surgery to reroute the blood flow to her heart.

Her recovery was slow and painful.

“I was so used to being in control and suddenly I was having to depend on people for my basic needs, just to get out of bed,” she said. “I couldn’t sleep because I was afraid I would die in my sleep.”

After a few months of inertia, a wakeup call came from her cardiologist.

“He told me I could just as well get hit by a car any day, so I might as well go out and live my life,” she said. “And I really wanted to be there for my young son.”

She started to arm herself with health information.

Ferguson-Davis, now 48, is motivating others, especially African Americans. Hypertension, a leading cause of stroke and heart attack, affects more than half of African American adults.

“In the African American community, we have a lot of church potlucks and I’m saying, ‘Let’s get some healthy meals in there.’ I’ll be that voice,” she said. “I used to cook ribs and barbecue, but now my diet is plant-based.”

She also recently started her own group for African American women called Heart Sistas, where members, including her sister Judy Ferguson-Missick, share heart-healthy information and motivation. One of their sisters recently died from a stroke, Ferguson-Davis said.

“It breaks my heart to see so many women not taking care of themselves, but I understand because I was there once,” she said. “We dress up on the outside, but we don’t take care of the inside.”

Ferguson-Missick, who last year faced her own Type 2 diabetes diagnosis, is proud of her sister.

“After the stroke and surgery, it was so hard,” she said. “Now we motivate each other.”

A meat lover herself, Ferguson-Missick is impressed with her sister’s vegetable-centric meals.

“She knows how to bring in the cultural spices that make the dishes tasty,” she said. “She makes this vegetable medley that I’d eat all day long.”

Ferguson-Davis considers that a win.