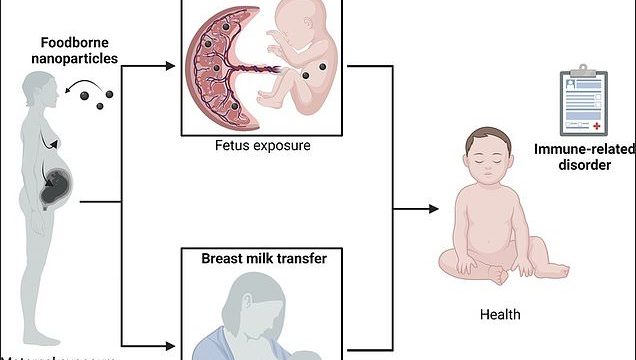 Is this why childhood allergies are on the rise? Additives in junk food crosses the placenta during pregnancy and warps their immune systems

Additives in junk food can seep into babies in the womb and trigger changes linked to the development of allergies, a study claims.

The finding — based on a review of around 170 studies — may partly explain why allergy rates have rocketed in the US and Britain over the past two decades.

Researchers found that tiny particles added to sugars, sweeteners and preservatives used to make sweets, cakes and syrups can cross the placenta and reach the fetus. The nanoparticles accumulate in the gut and disrupt the babies’ microbiome, they say.

Mountains of research show that high-fat diets during pregnancy can wreck babies’ immune systems and leave them prone to a host of health issues.

The above graphic, made by the researchers, shows nanoparticles being ingested by a mother (black dots) reaching infants via the placenta and through drinking breastmilk. In turn, it suggests that this raises the risk of an immune disorder

A total of 5.6million American schoolchildren have allergies. The US has seen its rates double in about a decade, rising from two percent in 2007 to eight percent today. The UK has seen a similar rise.

Scientists argue the surge is being triggered because they are growing up in an increasingly sterile world, free of many germs that help build a robust immune system.

An allergy is when the body reacts to a certain food or substance as though it is harmful.

They are very common, affecting around a quarter of Brits and a third of Americans.

Children are the most likely to suffer from allergies, although some will fade with age.

Most allergies, such to pollen, dust mites and foods, are mild and can be kept under control, but severe reactions can happen.

It’s not clear why allergies happen, but most people affected have a family history of allergies or have closely related conditions, such as asthma or eczema.

The number of people with allergies is increasing every year.

The reasons for this are not understood, but one of the main theories is it’s the result of living in a cleaner environment, which reduces the number of germs our immune system has to deal with.

It’s thought this may cause it to overreact when it comes into contact with harmless substances.

In the latest research, scientists combed through databases for studies on the effect of additives in food on the body’s bacteria and immune system.

A total of 168 research papers were extracted, including studies carried out in the lab, on rodents and in humans.

They focused on three additives found in many processed foods — including titanium dioxide, which is used in popular candies, salad dressing and chewing gum to give a smooth texture or to work as a white colorant.

The study also looked at silicon dioxide, which stops foods from caking or sticking together, and nanosilver, a preservative used in food packaging to extend the shelf-life of snacks.

The scientists found lots of evidence that, in mice, nanoparticles found in these additives can cross the placenta and enter the gut of children. But they said there were also some signs this can happen in humans, too.

The gut does not absorb the tiny particles; instead, they clump together and disrupt the surrounding bacteria.

Because the microbiome is so connected to the immune system, the researchers theorize it could be playing a role in the development of allergies.

Because allergies in children are more common than in adults, researchers argue this boosts their theory.

The review article was published today in Frontiers in Allergy.

Dr Karine Adel-Patient, a human health expert at Université Paris-Saclay, warned: ‘The impact of such exposure on the development of food allergy has not been assessed to date.

‘Our review highlights the urgent need for researchers to assess the risk related to exposure to foodborne inorganic nanoparticles during a critical window of susceptibility and its impact on children’s health.’

She added: ‘Such agents can cross the placental barrier and then reach the developing fetus.

‘Excretion in milk is also suggested, continuing to expose the neonate.’

Peanuts and tree nuts are behind most allergies in children, whereas in the general population shellfish, milk and peanuts were the main cause of allergies.

Over 900 food products include at least one additive or component that is defined as a nanoparticle.