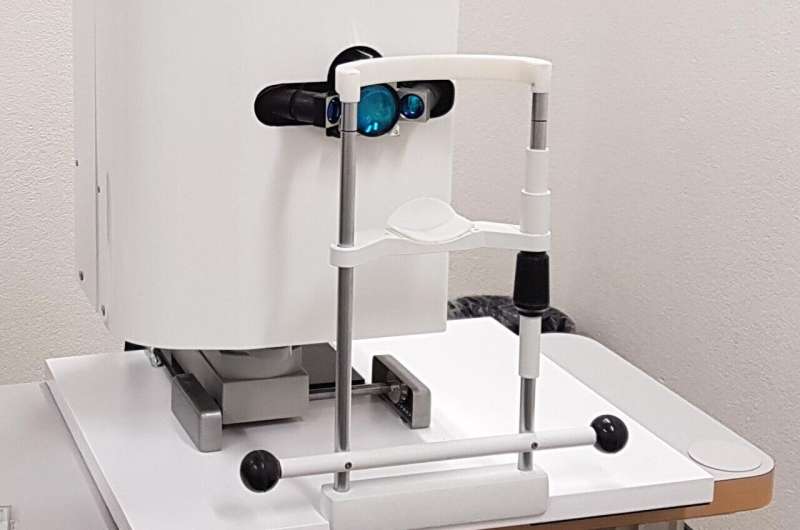 Researchers at an EPFL lab have developed an ophthalmological device that can be used to diagnose some degenerative eye disorders long before the onset of the first symptoms. In early clinical trials, the prototype was shown to produce images with a sufficient degree of precision in just five seconds.

Research into treatments to stop or limit the progression of degenerative eye disorders that can lead to blindness is moving ahead apace. But, at present, there is no device that can reliably diagnose these conditions before the first symptoms appear. These disorders, the best-known of which is age-related macular degeneration (AMD), involve changes to the eye’s photoreceptors. And they all have the same root cause: the deterioration of the retinal pigmentary epithelium (RPE), a layer of cells that sits behind the photoreceptors.

The device developed at EPFL’s Laboratory of Applied Photonics Devices (LAPD) observes changes in the RPE before the onset of symptoms, providing researchers with the first-ever in vivo images in which cells can be differentiated. Armed with this early detection capability, clinicians will be able to diagnose these disorders before irreversible symptoms occur. The results of the first clinical trial have been published in a paper in the journal Ophthalmology Science.

Observing changes in the cells behind the photoreceptors

In addition to causing AMD, the deterioration of the RPE is behind a number of other eye disorders, including retinitis pigmentosa and diabetic retinopathy. Located between the photoreceptors and the choroid (a thin layer of tissue containing the vessels that carry blood to the retina), the RPE plays an important role in maintaining visual function and preserving the health of the eye’s rods and cones.

Several research groups have studied these cells under the microscope—in vitro—to determine their properties and to observe the morphological changes that occur with aging but also with the onset and progression of retinal disorders such as AMD and retinitis pigmentosa. Until now, however, there has been no simple and reliable method for observing the RPE in a live patient—in vivo—for early detection and ongoing monitoring of these conditions. 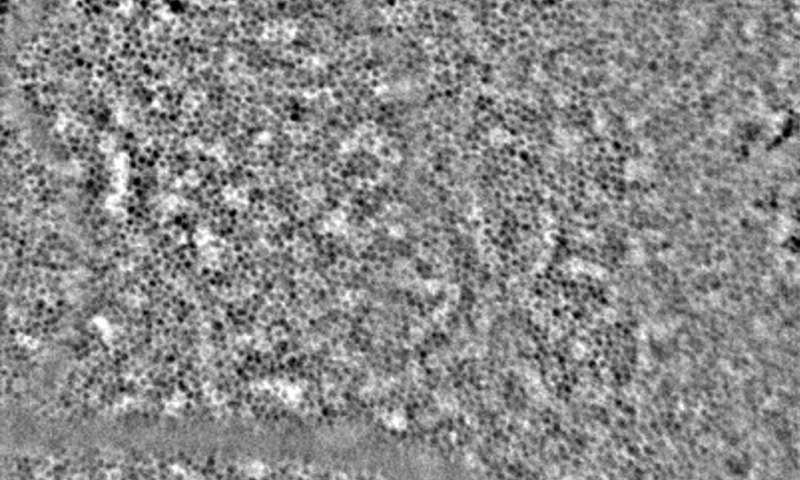 Various attempts have been made to design a device that allows clinicians to examine the RPE. But each has so far failed on the grounds of inadequate resolution, patient safety concerns or excessively long exposure times. The team at EPFL developed a retinal camera that features two oblique beams, trained on the white of the eye, coupled with an adaptive optical system that corrects distortions in the light waves to produce a clear image. This technology, dubbed Transscleral Optical Imaging, is similar to existing retinal imaging systems in its use of infrared light beams.

But, according to Christophe Moser, who heads the LAPD at the School of Engineering, it has one key difference: “The beams focus obliquely through the white of the eye, which circumvents the problem of excess light caused by the highly reflective cone photoreceptor cells, located in the center of the eye, when you illuminate the retina via the pupil.” The light waves are then captured by the camera as they exit the eye through the pupil. The team had something of a eureka moment when they saw the first clear image on screen, since it was the first time anyone had observed this part of the human body using a clinically compatible imaging camera. 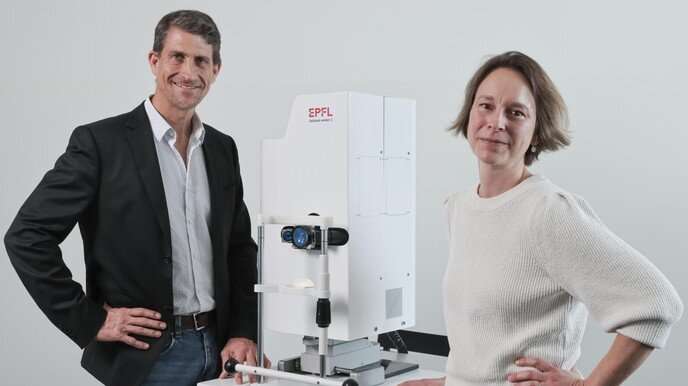 The researchers developed a clinical prototype in partnership with EarlySight, a spin-off from the same EPFL lab. With an exposure time of less than five seconds—a key speed advantage for potential diagnostic use—the camera is capable of capturing 100 raw images. Algorithms then align and aggregate the raw footage to produce a single, high-quality image on screen. The interface features five buttons, each corresponding to a predefined area of the eye, allowing the desired image to be selected. Users can also click anywhere on the diagram of the back of the eye to select the precise area they want to image.

The prototype device, known as Cellularis, was developed as part of the European Union’s EIT Health ASSESS project, in partnership with Francine Behar-Cohen’s research team at the French National Health and Medical Research Institute (INSERM) in Paris, and with the clinical research center at Jules-Gonin Eye Hospital in Lausanne. The camera was then assessed in a clinical trial—led by Irmela Mantel, a physician associate at the Medical Retina Unit of Jules-Gonin Eye Hospital—designed to evaluate the device’s ability to produce clear RPE images in 29 healthy volunteers. In each case, the images generated by the camera were precise enough to quantify the morphological characteristics of the participants’ RPE cells. They were stored in a database for future contribution to medical research.