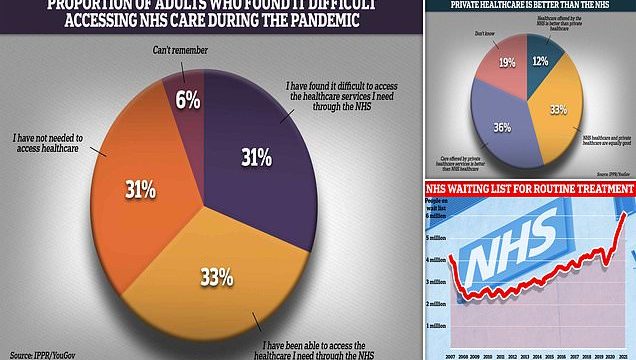 Up to 2MILLION Brits gave up on the NHS and went private during Covid because they didn’t want to wait for free healthcare, thinktank claims

Millions of adults have switched to private healthcare during the Covid pandemic because of difficulty accessing the NHS, a report has claimed.

The survey of nearly 3,500 adults suggested one in eight of those — the equivalent of 2million adults — opted to go private instead.

The thinktank warned the UK risks embedding a two-tier health system where those who can afford to will pay for private insurance, health tourism, direct payments and ‘waiting list fast passes’.

It means that millions of others will be left to ‘put up or shut up’.

Currently 6.1million people in England are on NHS waiting lists for routine treatment such as hip and knee replacements.

Official health service forecasts estimate the queue, already at a record-high, could peak as high as 10.7million by March 2024.

Sajid Javid last month unveiled his plan to tackle NHS backlogs as Britain moves out the pandemic, although it was slammed by MPs on either side of the Commons for ‘not being ambitious enough’. 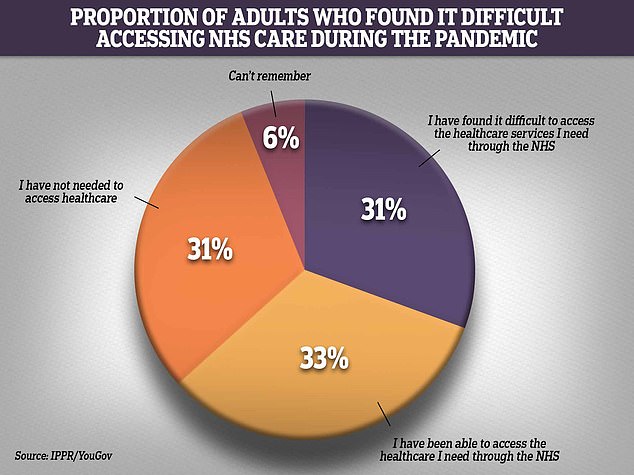 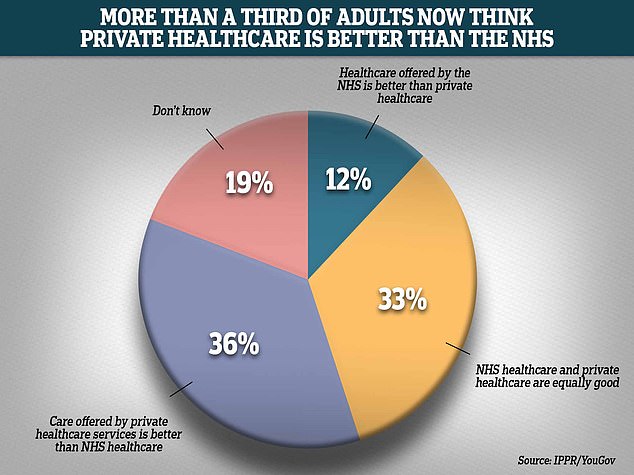 Graph shows: Three times as many people believed private care was now better than NHS services because of the pandemic. More than a third (36 per cent) said private care was superior, compared to 12 per cent who preferred the NHS. A third said both were equally good, while 19 per cent did not know 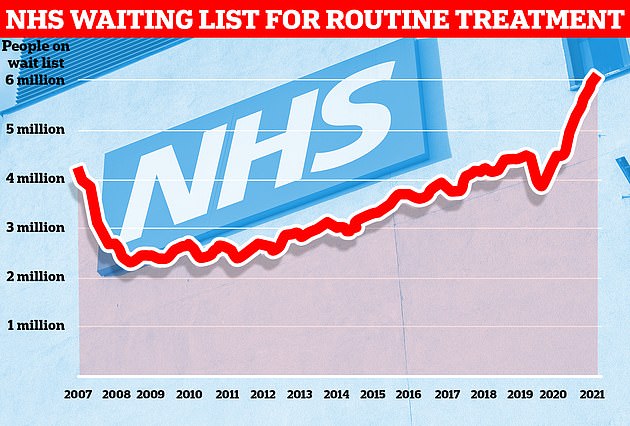 More than half of British adults found it harder to access their GP during the Covid pandemic, a survey has claimed.

Polling by the Institute for Public Policy Research thinktank found 54 per cent of adults believe it is now harder to talk to their GP — whether by phone or in-person — because of the pandemic.

The survey of 3,446 adults in England, Wales and Northern Ireland in November found the majority were dissatisfied with their local service.

Greater demand during the pandemic led to many waiting for their symptoms to settle, leading to more people in A&E, the IPPR said.

Just 60 per cent of appointments in January were made in-person, compared to more than 80 per cent before March 2020.

Conservative Joy Morrissey told MailOnline returning to pre-pandemic levels of  appointments must be a ‘key objective of learning to live with Covid’.

It found three times as many people believed private care was now better than NHS services because of the pandemic. A third said they were as good as each other.

Thirty-one per cent complained they found it difficult to access healthcare during the pandemic — the equivalent of 16million British adults.

Of those who ran into trouble getting an appointment, 12 per cent admitted using private healthcare instead.

Eighteen per cent of Londoners used private healthcare and 15 per cent of people aged 65 ‘opted out’ of the NHS for care.

More than a quarter (26 per cent) said they thought about private healthcare but decided against it, while 59 per cent didn’t consider it because they couldn’t afford to.

Seventeen per cent — the equivalent of nearly nine million adults — said they would go private if they had to wait more than 18 weeks for treatment after referral.

More than two million have waited more than 18 weeks, according to NHS England’s most recent statistics.

The findings suggested more people who can afford it are opting-out of NHS care because of the pandemic, the IPPR said.

Despite the shift away from using NHS treatment, the poll found the overwhelming majority of Brits (88 per cent) still support the NHS as being free at the point of delivery.

However, only 79 per cent of respondents said the health service should be primarily funded through taxes.

IPPR researchers said the survey suggested the public want to see the NHS continue to be the main source of healthcare for most Britons, despite falling standards.

The left-wing thinktank called for greater funding for the health service to bring it in line with the public sector.

This is despite the NHS already receiving £192billion last year — more than £50billion more than the previous year because of the pandemic. It will also be given access to an extra £12billion being raised though a National Insurance hike in April. 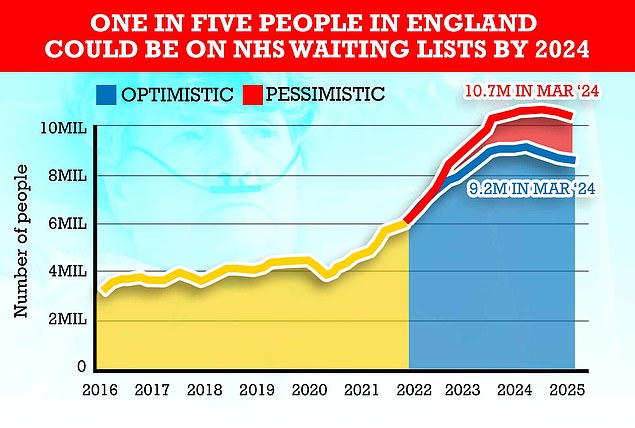 Queues for routine operations are expected to peak in 2024 at around 10.7million in the most pessimistic scenario, modelling from the NHS shows. It is because the health service expects many patients who missed operations to now come forward for care 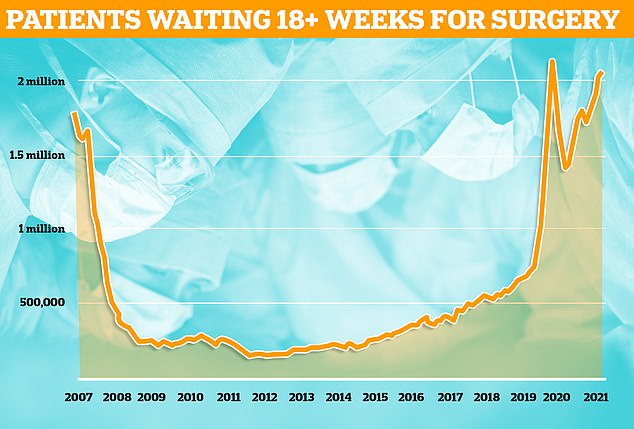 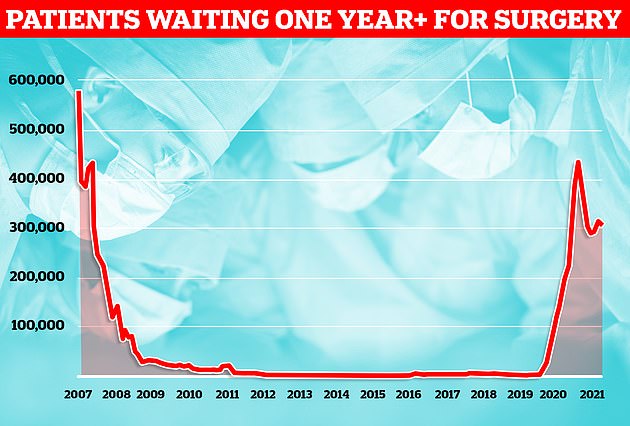 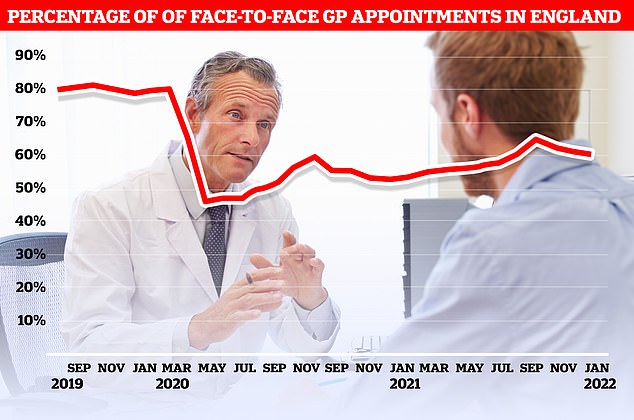 NHS Digital data shows just 60 per cent of appointments in January were in-person, compared to 61 per cent in December

NHS hospitals should not perform routine operations on Covid patients within two months of them getting the virus, experts have advised.

Despite warnings that the pandemic-fuelled backlog will double by 2024, surgeons say that only urgent surgery should be carried out within seven weeks of someone catching the virus.

No infected patient should be treated within 10 days of a positive test unless it’s a matter of life-or-death, under the new guidance.

This is because studies suggest patients are three times more likely to die after an operation in the seven weeks after catching Covid.

NHS trusts do not have to follow their guidance, which covers elective care such as hip and knee replacements. Thousands of ‘Covid’ patients are currently in hospitals across England despite not being primarily ill with the virus.

‘The risk is less a sudden privatisation, and more an emergence of something resembling the English education system – where the very best education is so often conditional on ability to pay.

‘If this were to become the new normal after the pandemic (as it has in social care and dentistry), it would worsen overall health and widen inequality.’

Chris Thomas, IPPR principal research fellow, said: ‘People aren’t opting-out the NHS because they’ve stopped believing in it as the best and fairest model of healthcare.

‘Rather, those who can afford it are being forced to go private by the consequences of austerity and the pandemic on NHS access and quality — and those without the funds are left to “put up or shut up”.

‘The risk is that, in the future, the idea you have to pay to get the best healthcare becomes normalised.’

The IPPR poll also found 54 per cent of adults believe it is now harder to talk to their GP — whether by phone or in-person — because of the pandemic.

Just 60 per cent of appointments in January were made in-person, compared to more than 80 per cent before March 2020.

Conservative Joy Morrissey told MailOnline returning to pre-pandemic levels of  appointments must be a ‘key objective of learning to live with Covid’.

He claimed the Government was ‘absolutely committed to tackling the Covid backlog and building a health and social care system for the long term’.

But the headline promise to scrap one-year waiting lists won’t come into effect until 2025 and the revised July 2022 deadline to scrap two-year queues is four months later than was previously promised by the Government.

The Health Secretary also admitted the queues for routine care will continue to rise for another two years.

All of the targets in the report are predicated on ‘maintaining low levels of Covid’, meaning they could be abandoned in the event of another serious outbreak. There are also no concrete recruitment targets over the next three years.

And despite promising to ‘go to war on cancer’, the commitment to diagnose suspected patients in 28 days is a target first set in 2019.

Labour said the plan fell ‘seriously short of the scale of the challenge facing the NHS and the misery affecting millions of people stuck on’ waiting lists and criticised the lack of a plan to address staff shortages.