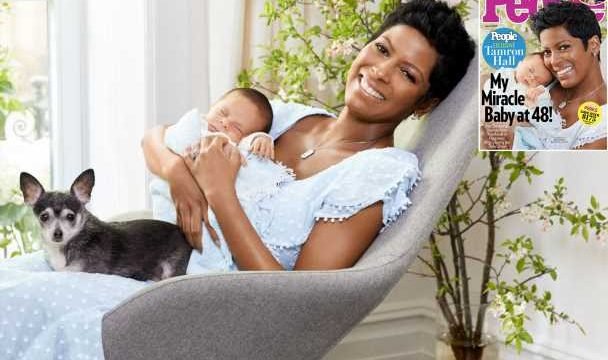 Tamron Hall‘s son Moses was worth every bit of time, effort and patience it took to bring him into the world on April 24. But there was a time when his mom wasn’t sure his arrival was even possible.

“I was high-risk, not just because of my age, but there were other medical factors too,” the former Today host, 48, tells PEOPLE in an exclusive interview for this week’s cover story, where she poses with her newborn son.

Hall revealed she was pregnant in March at 32 weeks along. She shares baby Moses, her first child, with husband Steven Greener, a music manager.

“My doctor said, ‘This is your body, your health. You share of your journey what you want to share,’ ” the new mom recalls. “I was terrified I would lose this baby and I would have to go back and tell everyone that now it was bad news, and after this pregnancy had gone so far.”

“I just wasn’t mentally prepared to deal with that,” Hall continues. “That’s why I waited. And trust me — if I could’ve
gone the whole way to delivery, I would’ve.”

Tamron Hall “Thrilled” About Pregnancy at 48: “She Thought This Wasn’t in the Cards,” Says Source

Hall tells PEOPLE she initially tried fertility treatments in her 30s, which failed, and had an “eye-opening” experience when she entered a fertility clinic again.

And while she realized, looking around at the other women there, that she wasn’t alone, it made her feel more “sad” than “empowered” knowing “that some of us will have to give up along the way.”

“I knew that the clock was not on my side,” Hall admits. “When I tried in my 30s, I still felt like I had some time, and the fertility clinic felt like a bright room. In my 40s I saw all the gray: The faces looked gray, the walls were gray, nothing seemed shiny and optimistic.”

“Just like with my job search during that time, there were so many frustrations: I’m putting in the work, I’m taking care of my mind and my body and I’m being rejected,” she continues. “I’m thinking, ‘Wait a minute. What have I done wrong here?’ Somehow, like Rocky, I kept getting up.”

Hall is now set to host her own syndicated talk show, premiering Sept. 9. But after she “lost her spot” on Today‘s third hour in 2017, she says she felt like she “didn’t have anything to wake up to” — a sobering thought that afforded her “an opportunity to look at my life.”

“When I left NBC, I said, ‘I look forward to the next chapter,’ ” Hall shares. “People assumed that I meant work, and I did, but by the third month I knew that my life had to be about something bigger than work.”

“My story is not one I could’ve ever expected,” the star tells PEOPLE. “Two and a half years ago when I walked out of that NBC building, I was in a fog, not knowing that so many of us lose things we think are important, and we have no idea that something better is right there.”

“I’m from the South, and there’s a saying: ‘It’s not a setback; it’s a setup for something else,’ ” she adds. “That loss set me up for, yes, a dream job but also my baby, my husband, my family. I just couldn’t see it coming.”

For more from Tamron Hall, pick up the latest issue of PEOPLE, on newsstands Friday.