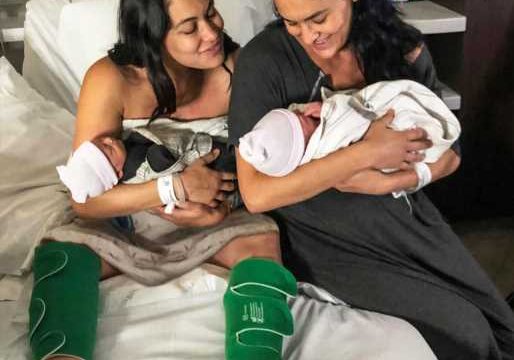 Shortly after each giving birth to a son, Nikki and Brie Bella were eager to meet each other's babies — and the moment was everything they expected and more!

In this week's issue of PEOPLE, the Total Bellas stars, both 36, open up about that special meeting and what they thought of each other's little ones.

"We're lucky because [our hospital rooms] were right next to each other and I was just like, 'My sister and I have been quarantined together and we're identical twins. Can she come in?' They said, 'Okay, in the middle of the night, we'll bring her, Artem and Matteo,' " recalls Brie, who delivered son Buddy Dessert on Aug. 1.

She adds, "Because I had a [cesarean] section and couldn't get out of bed, they came in the middle of the night, around midnight. It was really emotional to see them and to just see her holding a baby."

"I was like, 'What?!' Like, 'That's my sister,' " Brie shares. "We just sat on the bed and she held Buddy and I held Matteo and we were just chatting." "It was so special," adds Nikki, who welcomed her first child, son Matteo Artemovich, with fiancé Artem Chigvintsev on July 31. "It was so cute because seeing Buddy I immediately was like, 'Oh my gosh, that Bryan's mini.' "

"But he had these dimples and it brought me back to when I saw (Brie's 3-year-old daughter Birdie Joe, whom she also shares with husband Daniel Bryan)," Nikki continues. "It was weird, though, for me to see my sister with a son, because I'm just so used to Bird. It was almost like reliving our labor again. Like, 'Whoa, look at this baby.' "

Originally due Aug. 6, Nikki was on her way to get induced early (her doctors were worried about high blood pressure and offered the option of being induced one week prior) when her water broke in the doctor's office.

"Artem and I were so not prepared," she admits of herself and her Dancing with the Stars pro fiancé, 38. "We barely had bags packed. I labored for 22 hours, and I pushed for two hours while wearing a mask because of COVID-19." "It was 118 degrees in Phoenix and our room wouldn't get colder than 76 degrees, so I was burning hot the whole time," Nikki continues. "I had two more rounds of pushing [to go] until my doctor said, 'You're going to have to have a c-section.' I said, 'No, he's coming out vaginally.' "

"I looked at Artem [who was allowed in the room with a mask] and I go, 'Put on The Lumineers!' And literally we 'Hey Ho'-ed and 'Ophelia'-ed Matteo into this world," the new mom adds. "I have never pushed so hard in my life. I almost tore off the handlebars!"

Meanwhile, Brie — who jokes to PEOPLE that she was a little "upset" that her twin sister went into labor first — was scheduled for a c-section on Aug. 1.

"I was trying to have a VBAC [vaginal birth after previous c-section] because I had an emergency c-section with Birdie, but I forgot I make stubborn babies and they don't like to come out," says Brie. "When Matteo came on the 31st, I was like, 'No matter what, my baby is coming at 9 a.m. tomorrow.' We didn't know it was a boy yet."

Watch the full episode of People Cover Story: The Bella Twins streaming now on PeopleTV.com, or download the PeopleTV app on your favorite device. Meet Matteo and Buddy! Nikki and Brie Bella Introduce Their Boys to the World: "We're So in Love"

"This experience was so different from my last — just to walk into a c-section and be completely alert," she adds. "When they pulled out Buddy, they put down the curtain and my husband was like, 'Oh, I got a boy!' We were really overwhelmed with joy."

While the Bellas continue to adjust to their new normal, they couldn't be more in love with their bundles of joy.

"That's what happens when you're on an infant schedule," adds Brie. "But like Nikki said, the love is just so overpowering that even though you're so tired, that bliss just takes over."

For more from Nikki and Brie Bella, pick up the latest issue of PEOPLE, on newsstands everywhere Friday.