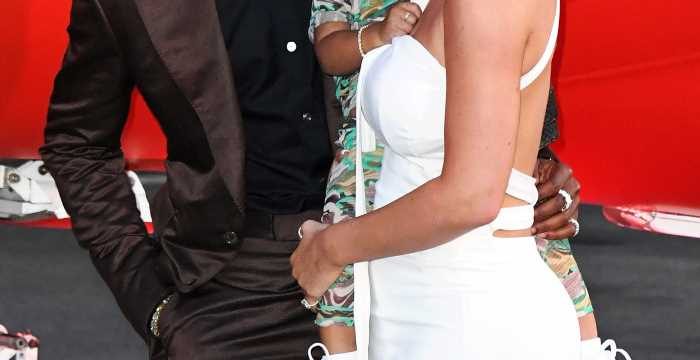 Stormi Webster got it from her mama — and her dada.

In a sneak preview of the return of The Ellen DeGeneres Show, set to air Monday, Kylie Jenner discussed her 18-month-old daughter’s habits and which parent she resembles more: the makeup mogul or her boyfriend Travis Scott.

“[Stormi] is so adorable, and such a good baby,” began DeGeneres, sharing that she saw Stormi backstage before the show.

“Such a good baby,” Jenner, 22, reiterated. “She comes everywhere with me.”

“She is so mellow, does she take more after you or Travis?” the comedian asked.

“She is the perfect mixture of the both of us,” Jenner smiled. “She’s definitely like a little rager, she loves music.”

Kris Jenner, who appeared on the show with her daughter, chimed in, “[Stormi] was dancing in the dressing room while you guys were all dancing, she couldn’t take her eyes off the screen.”

Turning to her mother, Kylie added, “You tell me that Stormi reminds you a lot of me.”

“She is like a little Kylie, it’s really wild,” Kris admitted. “Sometimes she looks at you and you think I have to remind myself ‘No, that’s my granddaughter, not Kylie.’ You know for two seconds, you’re starting to lose it.”

DeGeneres laughed, adding that whenever the reality show matriarch appears on her talk show she slips up her kids’ names.

“When I start calling her Kylie, you know we have a problem,” added Kris.

“There’s times when she’s yelling at me and she’s like ‘Khloé, Kourtney, Kim, Kylie’ like she can’t get it together, like do you even know my name?” Kylie joked with her mom.

Before her trip to Ellen, Stormi made her big red carpet debut at the premiere for her dad’s Netflix documentary, Travis Scott: Look Mom I Can Fly, in Santa Monica, California, on Aug. 27.

Proud parents Kylie and Scott walked their adorable daughter down the carpet while she wore a green and brown patterned onesie paired with white sneakers.

Stormi also embarked on a luxurious European getaway with her parents, in honor of her mom’s 22nd birthday in early August.

While on the trip, the Keeping Up with the Kardashians star posted several sweet moments with her daughter, including one Instagram snap taken along the Italian coast, where the mommy-daughter duo matched in blue dresses. “Amore mio,” Jenner captioned the photo.