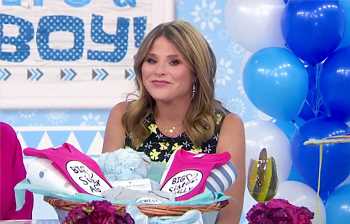 Jenna Bush Hager kept the surprises coming on Monday morning. Just hours after surprising her Today co-anchors by dropping the news that she and her husband Henry Hager are expecting their third child, the former first daughter, 37, revealed the sex of their baby on the way.

Asked why she decided to make the announcement today, Bush Hager shared she just “couldn’t hold it one minute longer.”

“But we told our girls yesterday,” she shared, referring to daughters Poppy Louise, 3, and Margaret “Mila” Laura, 6.

“The Easter bunny brought them an egg with the big reveal,” she added, before going on to reveal that the couple are expecting a son.

The soon-to-be mother of three went on to share a sweet video from when she told her daughters about the news on Easter.

“What do you guys want the very most? In the whole world?” she asked at the start of the video. After first guessing that the surprise would revolve around a toy, the couple’s eldest daughter correctly guessed that they had been “praying” for a “baby.”

After opening up the very special egg, the children were initially confused about where the baby boy would be coming from, but quickly began showing their excitement.

“Baby,” shouted Poppy, as she ran over to hug her mother’s stomach.

And after checking to make sure the news was for real, Bush Hager’s daughter Mila joined her sister in jumping up and down and giggling at the good news.

“Is this really happening?” she asked.

“It is a shock, it’s a lot,” she added. “We’re grateful. … Henry needs the congratulations because he’s a little terrified!”

Bush Hager went on to explain that she broke the news to her daughters on Sunday.

“I’m only telling because they found out yesterday in their Easter basket,” she said. “They told the man behind me on the airplane, they told the people at church … The girls are so happy.”

Asked when she was due and what she was having, Bush Hager teased that viewers would have to turn into the 10 a.m. hour of the Today show to find out.

As for Kotb, Bush Hager revealed that the two had discussed her happy news before Monday’s reveal.

“I told Hoda and I was really worried about it because we’re starting this new show. And I told Hoda and she kind of had a glimmer in her eye,” Bush Hager said. “And low and behold …”

Although Bush Hager went on to add that it’s nice to be expecting a son after previously welcoming two daughters, she and her husband just wanted to have a “healthy baby.”

“We weren’t really trying to get pregnant. We had some fertility issues with Poppy,” she explained. “So we just — it was a date night.”

With a laugh, she added, “Sorry mom!”