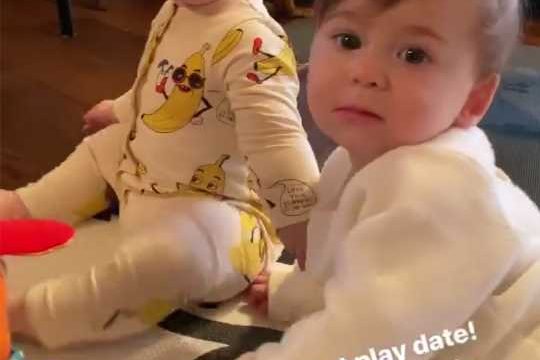 He may be only 8 months old, but Benjamin Allen‘s social calendar is already filling up!

Andy Cohen‘s baby boy got together with Ryan Serhant‘s daughter Zena, also 8 months, for a bonding session over the weekend where the babies played together while surrounded by their dads and Zena’s mom Emilia Bechrakis Serhant.

In a video Serhant shared to his Instagram Story, Cohen, 51, and Bechrakis Serhant, 34, sit on the floor with the babies, while the Million Dollar Listing New York star, 35, records the adorable footage.

“Smile!” Serhant says from behind the camera. “Zena, say hi to your boyfriend!”

He captioned the clip, “Their first play date!” and tagged both his wife and the Watch What Happens Live host.

MDLNY‘s Emilia Bechrakis Serhant Writes Kids’ Book About Her Struggles with Fertility: “Finding You Was a Journey”

Both Bravo stars welcomed their first children this past February, just weeks apart. Benjamin was born first, via surrogate on Feb. 4, and since then, the proud new dad has shared tons of cute snapshots and videos to his Instagram feed and Story.

One recent image saw the father-son duo in selfie mode, grinning at the camera as they lounged in bed. Notably, little Benjamin sported a St. Louis Blues hockey T-shirt — a nod to his dad’s hometown.

Earlier this month, the two visited the Statue of Liberty. Cohen couldn’t resist the photo-op, lifting his son into the air Lion King style, with Lady Liberty in the background.

“I’m excited to go on adventures with him and show him the world,” the television host told PEOPLE following Benjamin’s birth. “I want to see him running around a big green yard. I want to teach him to swim.”

The Serhants welcomed Zena just 22 days later, on Feb. 26, and have been open about how their journey to parenthood wasn’t exactly a straight line.

In fact, Bechrakis Serhant was so inspired by what the couple went through that she decided to detail her difficult fertility journey and her experiences with in vitro fertilization in a children’s picture book. Titled To the Moon and Back for You, the project is set for release in March.

“This book is for families in the IVF community and any woman who feels like a mother even before holding her child for the first time,” Bechrakis Serhant previously told PEOPLE. “It’s for the mothers who have longed for a baby, who have suffered loss or who have struggled in one way or another to have a child of their own.”

“I want families to enjoy reading it as much as I enjoyed writing it and to never feel alone in telling their unique story,” she added.