It’s a lively Thursday morning inside Jessica Alba’s Beverly Hills home. Voices echo on the main floor, an open concept with high ceilings. There are her three kids, energetic and giddy, the busy household staff plus a few employees from The Honest Company — the business she cofounded in 2012 that went public in May.

“It’s funny,” she said, relaxed in casualwear on a chaise in her sunny living room. The space, surrounded by French doors, is full of reclaimed wood and neutral, earthy tones. “When we were putting together the [government registration statement] S-1 and telling the brand story and all of this, I went through and found in my Google Docs some of my original decks that I had put together before I even launched the company, when I was still soliciting different partners to try and get them to join me and get money raised for the company. And really, all of the brand ethos are the same.”

She brings up “transparency, sustainability,” being “good for people, good for the planet,” brand values that have become common touchpoints for businesses today, but were much less talked about a decade ago.

The IPO earlier this year fulfills the goal of accelerating the company’s mission, “to drive the clean lifestyle conversation in the industry, inspiring everyone to love living consciously.” Alba now has a 6 percent stake in Honest, which raised $412.8 million, selling $25.9 million shares at $16 each at a reported valuation of $1.44 billion upon launch.

All the Looks at the 2021 Cannes Film Festival

It was in 2008, while pregnant with her eldest, Honor, that the actress — known for starring in Fox’s 2000 series “Dark Angel” and appearing in films like “Fantastic Four” and “Sin City” — imagined launching “clean” yet design-conscious and affordable baby products. She did so four years later, partnering with entrepreneurs Christopher Gavigan, Brian Lee and Sean Kane.

“I always wanted to build a company that had values and ethics, and also build community and educate through entertainment,” Alba said. “There was a bit in there that was, like, ‘Don’t just try and do ads or regular marketing.’ It was, like, ‘Bring people in through community and give them a takeaway, even if they don’t buy your product.’”

Since those early days, Honest has expanded tremendously, raising millions in funding ($100 million alone in 2015, at a $1.7 billion valuation). It now offers three categories of goods: diapers and wipes, skin and personal care under the Honest Beauty banner, and household and wellness, representing 63 percent, 26 percent and 11 percent of revenue last year, respectively, according to the company.

Today, Alba is focused on Honest Beauty, which was first unveiled in 2015, then revamped in 2018 — the year the company opened an in-house lab.

“We’ve refined and streamlined the business,” Alba told WWD at the time. Offering fewer skin care and cosmetic products (from about 80 to 40) at a lower price, the updated line had new formulations and packaging.

Alba is continuing that focus with her latest launch, a collection which also features sustainable packaging that will be increasingly rolled out to other products. “We have this value around curiosity and continuous improvement,” she said, sipping from a mug.

In terms of packaging, that means utilizing completely compostable “tree-free” cartons made from upcycled sugarcane byproduct: “Our secondary packaging is dope, because it’s taking basically something that would be used as trash, sugarcane husks, and then turning it into paper. And it’s just cool to think about turning garbage into something beautiful, right?”

“I’m not kidding,” she said, holding the bottle. “This is really impossible to formulate. [It’s] because we think about people with deep skin tones all the way, obviously, to fair skin tones, and getting an SPF that worked but then also didn’t give a purple [cast] because of the chemicals we don’t use.”

The cleanser, a gentle formula that’s free of water, has kaolin clay, while the toner is made with zinc PCA and microalgae extract. The face spray, which uses an extremolyte, is for environmental protection.

“I call it a primer,” Alba said. The 40-year-old entrepreneur found that it also helped keep her makeup on while wearing a protective face mask. “It’s not like your makeup doesn’t come off at all in the mask, but it reduced it tremendously.” 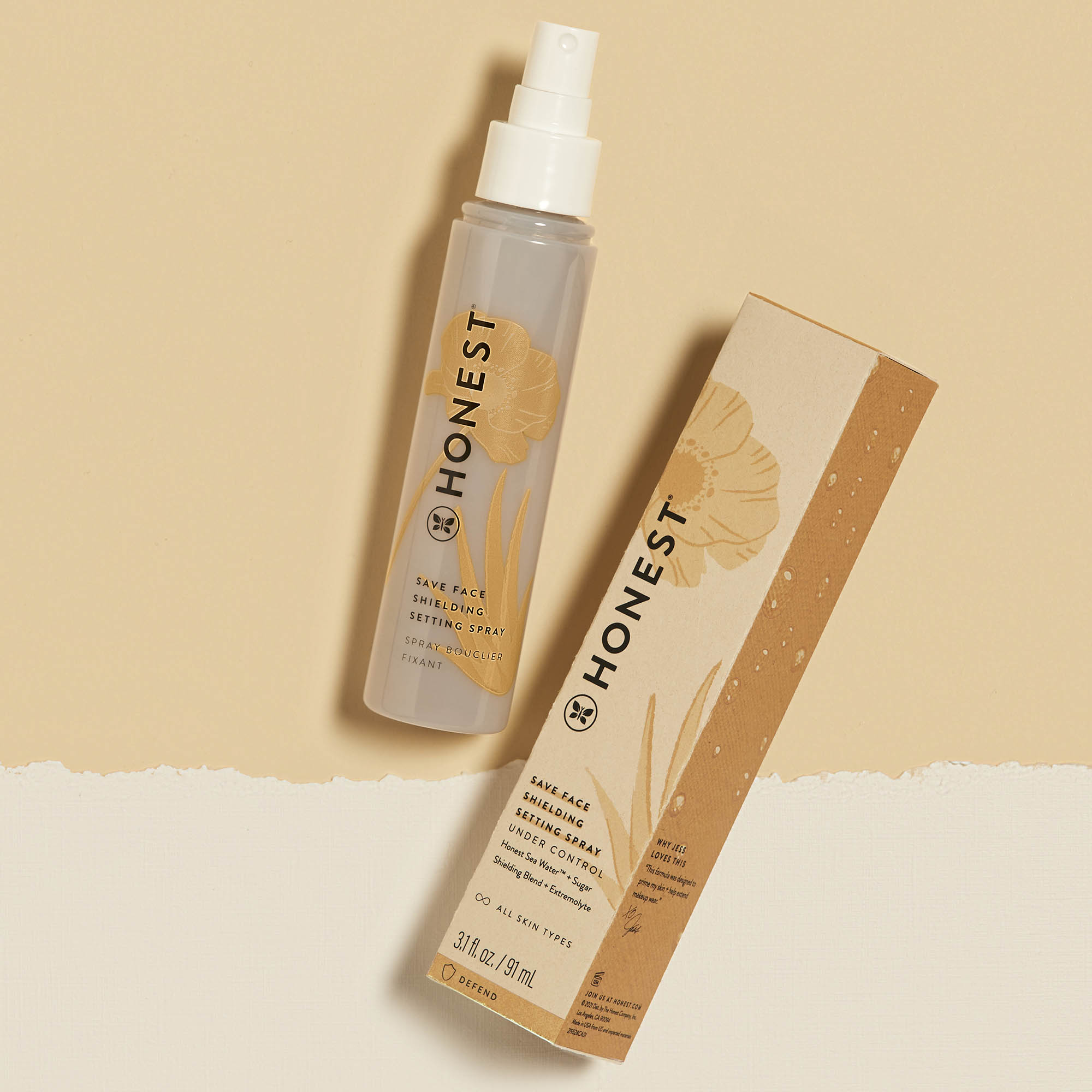 The $21.99 “shielding” setting spray, featuring the new packaging, is made for environmental protection. Courtesy

The development of the line — largely made with what the company calls its “Honest Sea Concentrate,” a mix of manganese, zinc and iron used as “shields” — was influenced by the pandemic and the idea of protecting the skin against an increasing array of assailants.

“You can’t help it, right?” she continued. “You have to be influenced by what’s going on in the world. And flu season is coming. And I don’t know if COVID-19 is ever going to really go away. It might just be like the flu, and every year it’s here.”

During the health crisis, Honest kept its doors open,  with those who were able working virtually, including Alba. “I worked in my closet upstairs, where I set up my desk,” she said with a smile. “It’s like a bar cart that I turned into a desk.”

The business has a team of about 200, which Alba said seems to be the sweet spot.

“It’s a good ratio, because we do overinvest in our team ahead of growth,” she said. “I don’t think more means better. I’ve seen the business in various stages, with different business partners of mine who think that having more people there makes the business look like it’s something, with that feeling that you get when you walk into a super crowded office. I had a business partner that really loved that. But it drains the bank account. And people need leadership. They need to know what they’re doing every day.”

During the pandemic, Honest leaned into digital content, while community building, Alba said. “When people’s habits moved more online, we were ready.”

The company, which launched direct-to-consumer, has an omnichannel approach and can be found in about 32,000 retail locations across the U.S., Canada and Europe, including Costco, Target and Amazon; the partnerships were launched in 2013, 2014 and 2017, respectively, while continuously improving the Honest.com experience to better understand and track shopping behavior. Consumers are often “young, digitally inclined, mobile-centric and value the aesthetics of the products they buy.”

In 2020, Honest generated 55 percent of revenue from digital channels and 45 percent from retail, growing 28 percent (from $235.6 million to $300.5 million); dippers and wipes saw a 16 percent increase, while skin and personal care grew 36 percent, and household and wellness went up 117 percent, from 2019 to 2020. Still, the company generated a net loss of $15 million last year, while increasing gross margin from 2019 by 370 basis points to 35.9 percent in 2020 and achieving adjusted EBITDA (earnings before interest, taxes, depreciation and amortization) of $11 million, 4 percent of 2020 revenue, according to Honest. 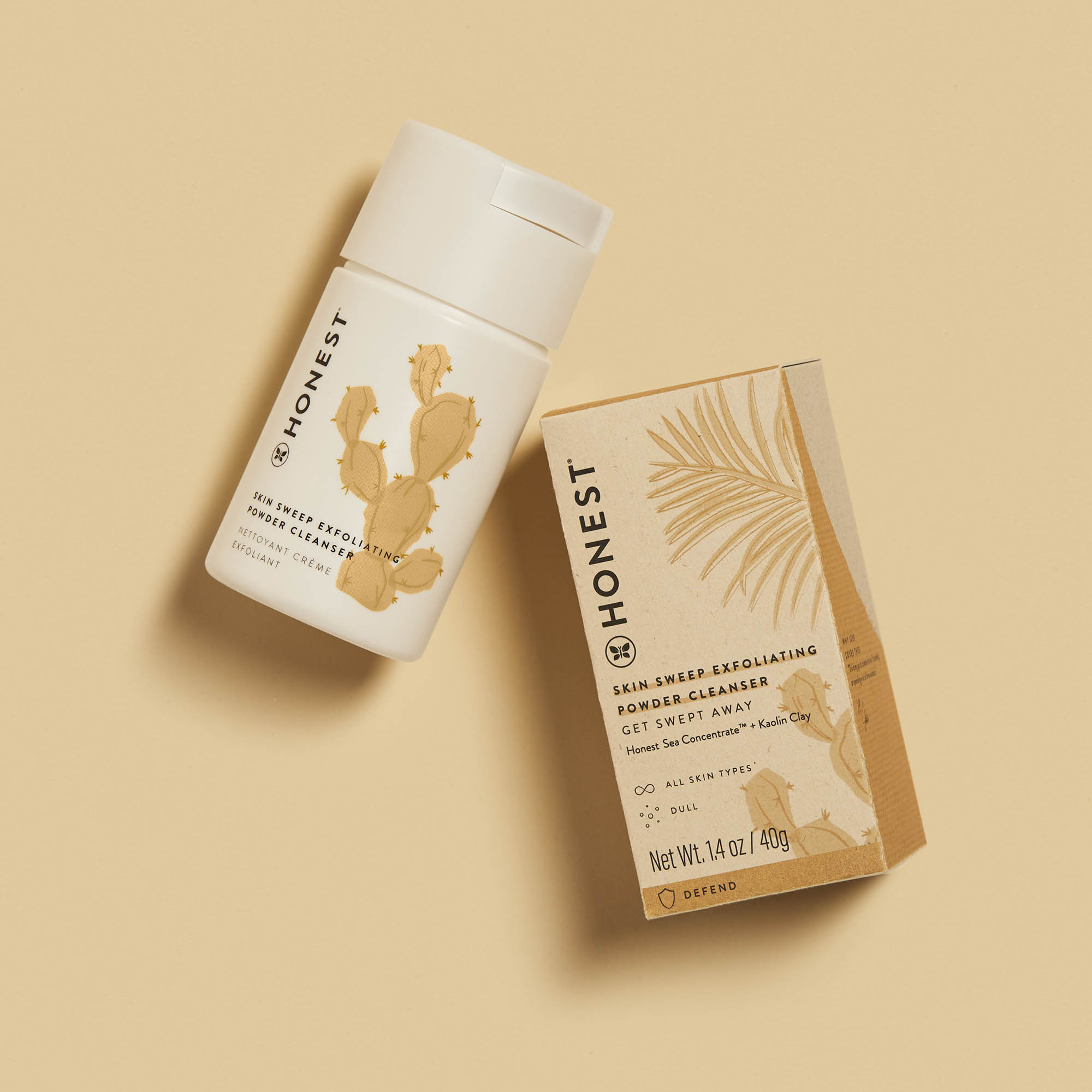 The $21.99 powder cleanser, a gentle formula that’s free of water, is made with kaolin clay. Courtesy

It’s been a journey, with ups and downs, since launching the business, which has dealt with headline-making lawsuits. But Alba is looking ahead, and while working with chief executive officer Nick Vlahos, who was appointed in 2017, she’s set on spreading her mission of “conscious living.”

“As we’re transitioning into this next phase with Honest, it’s about being able to really fully function as a lifestyle, a holistic lifestyle across the board, telling that story better and really putting our arms around that clean, conscious movement,” she said. “At the end of the day, when you are conscious of your choices, you are happier, you are healthier, you feel good. That’s something that we all learned during the pandemic. When you make your choices more thoughtfully, there’s a better outcome. Everything’s more satisfying.”

What does “clean” mean to Honest?

“For us, it’s no synthetic fragrances,” Alba said. “It’s banning thousands of chemicals and ingredients. It’s also testing for safety. And making sure that we are sourcing responsibly, thinking about the planet, about people’s health and about the end packaging, solutions, bringing it to life in a way that is not compromising on anything and trying to do our best and always, again, continuous improvement.”

They’ll carry on innovating formulations and packaging, with the supply chain operations team working closely with research and development. While product formulations are created in-house in California, packaging is outsourced (with manufacturers, suppliers and partners based throughout the world).

“It’s really about looking for, not just the best companies that are making these [“clean”] alternatives, but then also looking at our current vendors and saying, ‘Hey, how can you do better?’” she said. “When my CEO Nick came on, we aligned on this value of like, ‘This might be great right now, but five years from now, who knows where the technology is going to be, who knows what the world is going to look like.’ So, you have to constantly keep your ear to the ground and stay progressive and try and get ahead of the curve.” 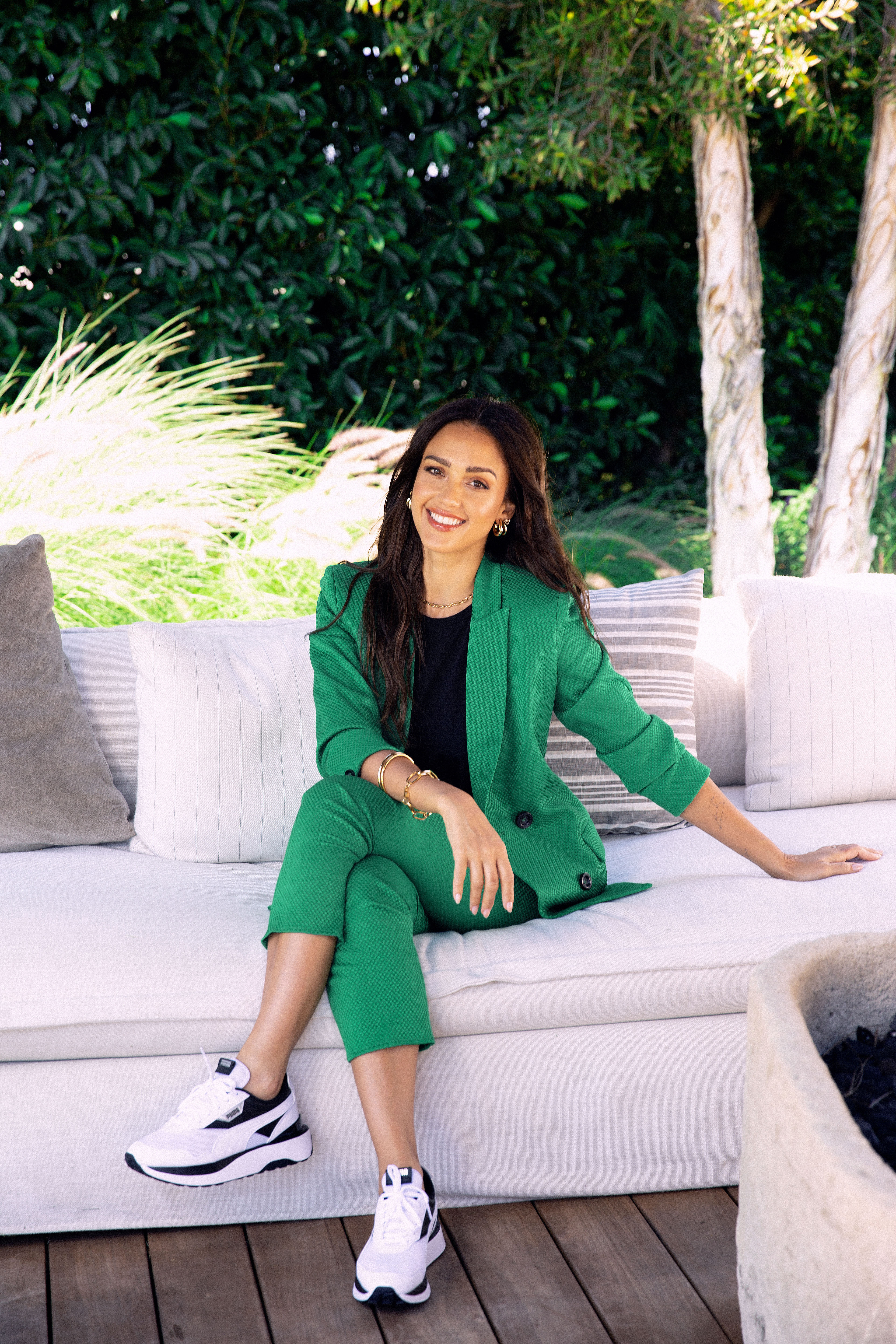 How is that achieved at scale?

Producing “hundreds of thousands,” sometimes “million” of items, they “have really rigorous practices around quality control and regulation,” she said. “From a supply chain perspective, [we ask,] ‘Is there transparency, and how are raw materials sourced? And how are things actually being put together and created?’ We have a supply chain expert that sources down to the raw materials in order for us to fulfill that, because it is super challenging.”

Almonds, for example, she said, are being overused and linked to deforestation.

“It can have an adverse effect on the planet when everyone is using just one material,” she said. “Not everything natural is good for you.”

Natural, though, is the look when it comes to the company’s beauty ad campaigns and new releases; recent launches in cosmetics blend color with nourishing ingredients for skin care benefits: a $19.99 serum-infused lash tint and $14.99 brow gel. The former was inspired by Honor. “She was 12 at the time,” Alba said. It was a year ago. “She was like, ‘Mom, I don’t want to look like I’m trying to wear makeup.’”

In comparison, “when I was her age,” she continued, “I didn’t really know how to wear makeup, so it was either a Bobbi Brown stick, full face or I had the same liner around my eyes as I used on my lips. And then I used, like, a Dr. Pepper type lip balm.”

Alba is often introducing and engaging with her kids in online videos, whether she’s welcoming Architectural Digest into her home for a house tour or filming a social media video. She’s actively keeping up with the times, highly engaged on all the major platforms — YouTube, Instagram and TikTok — where she has a combined following of 26 million.

“It’s cool that more people, especially young people, are aware of making better choices and how they will affect their health and environment,” she said.

Elements of the new packaging, which reduces the company’s carbon footprint, can be found in hero products like the “Magic Beauty Balm” — which is now in a completely recyclable plastic compact. Alba said she’s looking to update Honest’s entire inventory, while working to grow.

“We’re never satisfied with what is happening today,” she added. “We’re never patting ourselves on the back, like ‘Job well done.’ We’re always looking at, ‘How can we get better? How can we improve? Also, how can we improve our margins?’ So, I’m thinking through, yes, we want everything to be better for you, better for the planet, but then also, how can we create a better business all around and all together?”