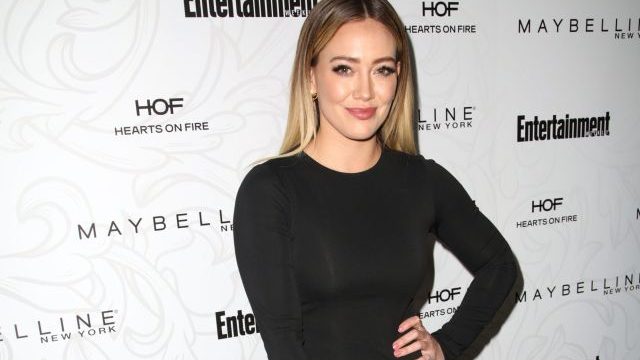 Hilary Duff is making makeup.
The 31-year old star of "Younger" has designed her first makeup collection in collaboration with Nudestix. The products, collectively called the Daydreamer Palette, include a Nudies Matte All-Over Blush, Glow All-Over Highlighter, three Magnetic Luminous Eye Colors, and Gel Color Lip and Cheek Balm. They will launch on Nudestix.com for pre-sale on Sept. 5, before officially launching Sept. 10.
Colors include a shimmery green eye shadow and highlighter with blue-ish undertones — not exactly typical "Millennial mom" makeup, Duff acknowledged.
"Some days I feel very typical and some days I'm like, 'I'm not typical at all, I'm still a little quirky and different.' I don't want to just wear a nude lip and mascara and call it a day. I like to, depending on what I'm wearing, put a little pop of color on my eyes or do something that looks like myself but a little elevated. I put an extra minute in," Duff said.
"The colors were a nod to the fall. There are a lot of pink and ethereal tones in there. I'm a California girl and everything is like, bronze-y and golden, and I'm sick of that," Duff said. "I want my sweater and I want pearlized tones."
Duff invested in Nudestix earlier this year, and initially thought about it as a business move rather than a creative one, she said. But when the brand's products started to take over her makeup bag, she decided to pitch herself to Nudestix for a collaboration, she said.
"They were excited I was investing, but I definitely pitched myself to them for the capsule," Duff said. The Nudestix team popped over to Duff's home to start working on the line, and she already had ideas for the products she wanted to make, she noted.
"I had just had my daughter, Banks, and I'm like literally breastfeeding. They come over, and I'm like, 'Guys, I don't have any help today. I'm sorry, I'm just going to have a baby on my boob and that's just what it is,'" Duff said. "I had everything that I wanted, like tones and a few of my favorite products I wanted to base them off of, and they were like, 'OK, you have a very clear vision of what you want.' And that's how the process started."
One of the products she based a Magnetic Luminous Eye Color on was an old eyeliner she had from Senna. "It was a very skinny green pencil, and I sharpened it down until it wouldn't fit in a sharpener anymore. I was like, 'I can never find anything that's like this.' But, thank God I kept that little nub," Duff said.
She has long been a makeup enthusiast. "I've always dreamed of doing , and I just don't have enough time. Between both coasts and I have two kids and I have my hands in a lot of different pots, and the market's really saturated. I don't really know exactly where I would fit in right now," she said.
Plus, in her personal routine, she's starting to get more into skin-care now anyway.
"At my age, I care more about my skin routine," Duff said. "Properly prepping my skin and wearing sunscreen and washing my face at night and exfoliating and getting facials and keeping that up."
There are days she won't wear makeup at all, but admits she's partial to highlighter and eyelash extensions.
"I live for highlighter, so I always want to have a little bit of glow going on, and I do have a little bit of an obsession with eyelash extensions because I am a mom on the go," Duff said.
She is one of many celebrities to get involved in the beauty space, which has attracted both celebrity investors and entrepreneurs. There are a handful of celebrities launching brands, including Selena Gomez, Millie Bobby Brown and Tracee Ellis Ross, but there are also celebrity and influencer investors, including Chelsea Handler, Ashton Kutcher and Leandra Medine.
For more from WWD.com, see:
Millie Bobby Brown Launches a Gen Z Beauty Brand
In First Month, Gucci Sold More Than 1 Million Lipsticks
Ulta Beauty Predicts Continued Challenges in U.S. Makeup
Source: Read Full Article