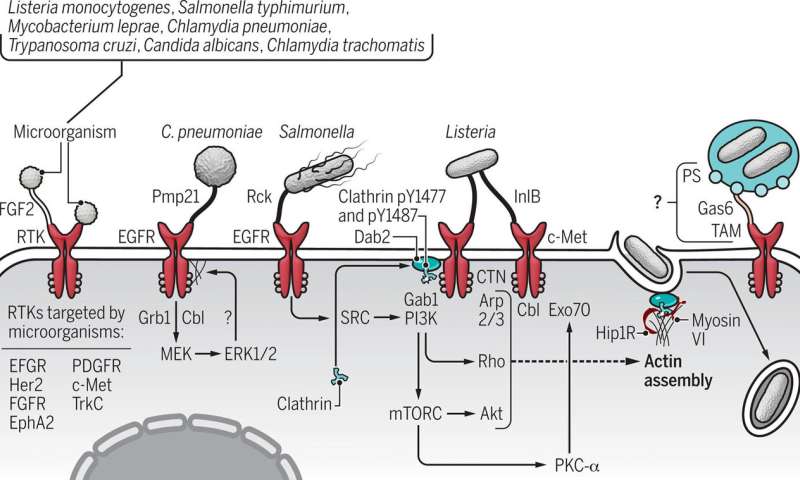 No matter the pathogen—virus, bacterium or fungus—many “pick a specific type of lock” on the surface of cells, which allows the microbe to break and enter into the inner sanctum of the host’s genome.

In a sweeping analysis on how microbes hack into cells and commandeer them, Australian microbiologists say they are also uncovering mechanisms in common between microbes and cancer cells. Their research suggests that in the not-too-distant future it may be possible to cure infectious diseases with repurposed cancer drugs, medications that can function across a broad range of pathogens, eliminating the need for antibiotics, antivirals and antifungals.

An ultimate hope, these scientists say, is ushering in the era of anti-infectives, drugs that block a vulnerable port of entry for infectious agents.

Writing in the journal Science Signaling, Dr. Gholamreza Haqshenas of Monash Biomedicine Discovery Institute in Australia, and Dr. Christian Doerig, also of Monash, as well as RMIT University in Australia, say a radically diverse group of pathogens have surprisingly evolved to subvert cells in a sly way.

While there are numerous pathways to infection, many microbes enter their hosts by hijacking signaling proteins, a finding that has become increasingly clear in recent years, Haqshenas and Doerig say.

Signaling proteins are molecules that are responsible for sending messages within and between cells. These proteins have segments above and below the cell surface, which are critical to cellular function. So it should come as no surprise, the Australian team says, that microbes responsible for some of the most serious infections have targeted a superfamily of signaling molecules—receptor tyrosine kinases—as their route into the host’s cellular domain.

Haqshenas said a vast range of pathogens have evolved mechanisms to hack into cells by targeting receptor tyrosine kinases, or RTKs. These microbes can bind to the receptor and like a safe cracker, “unlock” the cell.

“To name some important ones: Hepatitis C and influenza viruses,” Haqshenas told Medical Xpress. “Among bacteria, Salmonella and Listeria monocytogenes; and among fungi, Candida albicans.”

When a bacterium, such as Chlamydia pneumoniae binds to a receptor tyrosine kinase protein on a cell’s surface, the pathogen not only commandeers the cell, it stimulates signaling, the messages that control the cell. The pathogen assumes command of everything including the cell’s structure, its cytoskeleton, thereby easing its entry into the cell.

The RTK superfamily, which has about 58 members, function as the cell receptors for numerous biological growth factors, such as epidermal growth factor, platelet-derived growth factor and vascular endothelial growth factor, to name a few. These factors are like keys that once bound to the receptor can unlock it and enter the cell. An overabundance of RTKs occurs in some cancers, which can lead to cancer progression. RTK blockers, medications referred to as small-molecule drugs, have been developed to treat a form of leukemia and a rare intestinal cancer, which are marked by excessive RTKs. Gleevec was the first drug developed in this class and was approved by the U.S. Food and Drug Administration nearly two decades ago.

Although Haqshenas and Doerig report that a veritable rogue’s gallery of viruses can commandeer receptor tyrosine kinases as an entryway into cells, Doerig underscored “there are other mechanisms of entry for some bacteria.”

Pathogens that use the RTK route to infection have evolved specialized mechanisms that have allowed them to hack their way into host cells via this passageway.

The list is longer still, according to Haqshenas and Doerig, who say it also includes Kaposi’s sarcoma-associated herpesvirus, lymphocytic choriomeningitis, Ross River and vaccinia viruses, pathogens that also preferentially hack their way into host cells by unlocking RTKs.

“The commonality of relying on the same RTKs suggests that selective inhibitors against specific RTKs may have broad spectrum anti-infective properties. Definitely worth further investigation,” Doerig said.

Haqshenas likewise sees their new analysis as a springboard to further research that explores the possibility of using existing drugs in new ways against infectious agents.

“Our review highlights the importance of RTKs in the biology of many pathogens of importance to public health,” Haqshenas said. “Currently, RTKs are common targets of anti-cancer drugs. The review highlights that FDA-approved anti-cancer drugs can be repurposed for the treatment of infections caused by a wide range of pathogens that must enter host cells to complete their life cycle.